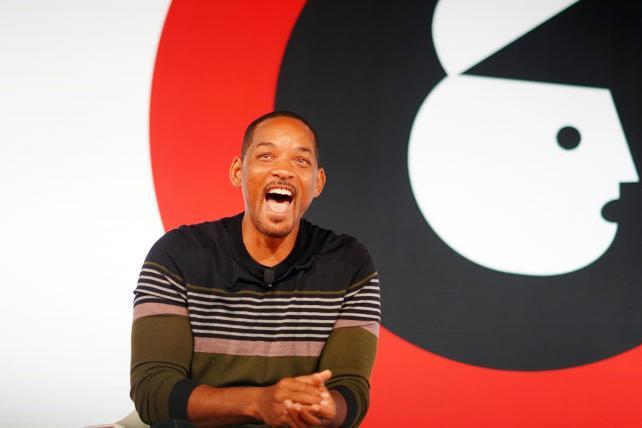 Will Smith says you can be a legend

A round of cheers went up from today's Advertising Week audience when actor Will Smith told attendees -- who live and die by metrics -- to have the courage to ignore the data if your instinct tells you otherwise. "Nothing is more valuable than your gut," Smith says. "The metrics are there to help you train your gut because at the end of the day you have to make the call on the extraordinary. The metrics keep you in the ordinary. The thing that succeeds is going to be way outside what somebody even thought was possible." Often, he says that means "You've got to make a call when everybody says no. That's the one that makes you a legend." -- Garett Sloane

Alex Bogusky — who recently made a high-profile return to CP&B — appeared on a panel with CP&B President Danielle Aldrich in the form of mannequin wearing a "Good enough sucks" T-shirt and with a TV for a head (which streamed video of his actual head). Problem was, robo-Bogusky couldn't really hear any of the questions Aldrich was asking him. Read Judann Pollack's piece on the panel for more. —Megan Graham

Microsoft is scanning people's faces as they walk by as a part of their "real-time crowd insights" tool and, well, it's going great #AWNewYork pic.twitter.com/HMclVgdmuT

A rose by any other name

Spotted: Sarah Herron, a contestant on Sean Lowe's season of "The Bachelor," on a panel with Twitter and T-Mobile about influencer marketing. She didn't win the show, but now she can hawk T-Mobile on Instagram for money (and runs a nonprofit called SheLift, which offers outdoor adventures to girls with physical differences).-- Megan Graham

Wayfair, you're just what I need

Wayfair is getting physical. The home furnishings e-commerce company announced Wednesday it will be opening a series of pop-up shops in New Jersey and outside Boston—its first dive into the brick-and-mortar realm since its founding 16 years ago. Jessica Jacobs, director of marketing at the brand, discussed the decision at Advertising Week on Wednesday. "We're a little bit spoiled—we grew up a digital-first business," she said, noting that the "experiment with offline" will help the brand look at changing behavior from geographic regions. "We're giving it a whirl," she said. Jury's still out on if the new stores will have Wayfair's earworm jingle playing on repeat.—Adrianne Pasquarelli