Advertising Week Day 4: How was it for you? | Ad Age
Skip to main content
Sign In Register

READ THIS NEXT
According to Lee Clow, '1984' wasn't quite as ballsy as you thought 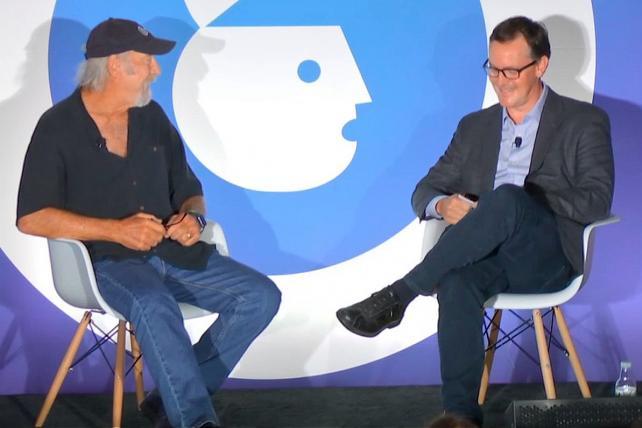 Deep collective sigh: Advertising Week is wrapping. On Friday, you can burn your badges, rest your tired feet and maybe -- just maybe -- finally have dinner at home. But before we put these four days, 1,216 speakers and 98,000 attendees behind us, we offer a look at today's highlights and reveal the week's superlatives.

Mother did not approve
"If people in Chicago aren't kicking their trash cans every morning, then we probably didn't do yesterday right."

That's Kurt Kane, chief concept and marketing officer at Wendy's, telling the audience that the fast-food restaurant's social media strategy is to tweak Chicago-based rival McDonald's every day. Wendy's has turned McDonald's trolling into an online art form with its notoriously sassy Twitter account, aided by its agency, VML.

This year, Wendy's dropped a "mixtape" on Spotify, iTunes and Google play called "We beefin," with tracks that tweaked rivals. It got so much free attention, Wendy's didn't have to pay to promote it with ads on Twitter, Kane said. "We never had a chance to spend the money," he said. "So, sorry about that Twitter."

Even Wendy's TV ads are steeped in snark. During this year's Super Bowl, Wendy's compared McDonald's flash-frozen burgers to a disaster on par with the Titanic. Kane said even his mom questioned if the brand should go that far, but he said that sometimes you've just got to go there. -- Garett Sloane

Punched by a (another) redhead
In a discussion Thursday afternoon with The Economist Group's Mina Seetharaman, Nick Law, global chief creative officer at Publicis Groupe and president of Publicis Communications, spoke about the role of data in creativity.

"Think about data as augmented experience," he said. "I might go outside and a red-headed person might punch me in the face. And I'm not going to think, 'Well, all redheads are idiots.'

"So this is where data can lead to bias, right? You need to look at data as a whole. And you need to understand where there are confirmation biases … you need to look at the big picture. And then you need to, as a creative person, take an intuitive leap. Humanity is everything. Take the data, figure out how it applies to us as humans, and and then take a leap." -- Megan Graham

Spoiler alert: They didn't get fired
Perhaps the most famous ad of all time nearly got its agency fired, Lee Clow revealed during a Q&A with Clio Awards Editor-in-Chief Tim Nudd.

"We showed ['1984'] at a big Apple sales meeting and everybody stood up and cheered and loved it," said the chairman at TBWA/Media Arts Lab and director of Media Arts at TBWA/Worldwide. Apple's board, however, was less than impressed and put the kibosh on the plan to run the spot multiple times after the Super Bowl. "They took a look at the spot and said, 'How much are we spending on this spot? And there's no product in it. Should we fire the agency?'" said Clow.

In retrospect, the decision to run it only once added to the '1984' mystique. "To this day, people think, 'Those guys were so ballsy, that was so genius to just run it once and never run it again,'" said Clow. "We would have run it a bunch more times if we could have. So that's kind of the real story." Read Meg Graham's full account of the panel here. -- Judann Pollack

One-way conversation
Vendor overheard at Advertising Week: "There are so few advertisers here. It's like we are talking to ourselves." -- Judann Pollack

And now a rebuttal
More than one advertiser is wondering if Advertising Week, and other conferences like it, is proof of the industry simply talking to itself. "It's a big boondoggle," they say (only they use an 11-letter word that starts with "cluster" and rhymes with "firetruck"). It's pay for play, they complain (O.K. kinda true). Still. To all of this I say: "Lighten up!"

Conferences are like any other personal or professional experience. Whether it's college or Burning Man or Salesforce Dreamforce, you're going to get out of it what you put into it. Read these five conference attendance tips, inspired by this recently wrapped Advertising Week. Because, after all, at the end of the day eyerolling in this business is a privilege. -- Heidi Waldusky

Advertising Week Superlatives
Ok, so that happened! Now that we've had a minute to absorb the week that was, we're here to bestow some honors. Here we go, in no particular order:

Most likely to appear on a panel: Shelley Zalis
Zalis, CEO of The Female Quotient and creator of The Girls' Lounge, appeared at eight events, including workshops, between Monday and Thursday, speaking on gender equality and perception. Close runner-up: Colleen DeCourcy.

Most likely to leave their company before the end of their panel: Tim Armstrong
A close call, though: Imran Khan is halfway out the door at Snacphat, but this one goes to Armstrong. He's leaving Oath, the AOL-Yahoo hybrid, but he still made it to his Advertising Week chat. There is no word on where he will be landing next -- or if he will even need to attend another Ad Week in his life. Unfortunately for him, he probably will.

Least likely to appear on a panel: Pharrell Williams
Despite wording that made it sound as though the popular musician would be speaking at the "Creating Movements" that Matter panel on Monday, neither Pharrell, nor Janelle Monae, who was also listed in the synopsis, were actually in attendance. Attendees were disappointed.

Least likely to care about blockchain: Will Smith
Will Smith, who was in attendance in his capacity as a YouTube star, has no need for blockchain. Block parties in the summertime, sure. But he isn't jiggy with crypto.

Most likely to pee on your leg: "Bullseye"
There were several different dogs playing the role of Target's miniature Bull Terrier mascot throughout the week. Most of them were real dogs. But we're not convinced the human in the full body Bullseye costume wouldn't be most likely to commit the aforementioned offense.

Most random person to take the stage: Trick question!
Everyone's a brand, sweetie.

Most likely to get confused with a movie star: Seth Rogin
Rogin, president and chief executive of Nucleus Marketing Solutions, spoke about developing leadership on Monday and cause marketing on Tuesday. He is also not Seth Rogen.

Most qualified to use the royal we: Matthew Scheckner
Scheckner, who founded Advertising Week 15 years ago, goes by Lord Matthew J. Scheckner in his opening letter to attendees. As the reported story goes, his friends across the pond bought him a lordship for his 50th birthday.

Most likely to have written this post: Ad Age Staff
We are sorry.