Welcome to Advertising Week. It's not too late to turn back

It's Advertising Week, and you know what that means: All week, you'll get to hear pitches for "the first-of-its-kind augmented reality influencer marketing technology for dark social." You'll get to meet programmatic thinkfluencers. You'll learn the latest in augmented native. And, hopefully, you've figured out by now that we made all of that up.

For a primer on Advertising Week by the numbers -- for real -- click this link. Once you're caught up, come back here if you're a glutton for punishment.

This here is a rolling blog, dedicated to all things Advertising Week. We'll be updating throughout the day, every day, as the panels and pageantry and festivities trudge along. And we promise to interview zero thinkfluencers. Or at least definitely no more than three. The newest posts will appear under this intro. Enjoy!

It is a vaunted media and marketing tradition to wonder when the machines are finally going to get it over with and take our jobs already. For advertising folk, one panel in particular should have felt at least a bit comforting.

Sure agencies have been looking more and more into AI, but fear not for your job -- just yet. "Machines are still kind of dumb these days," said Campbell Soup Company's VP-integrated marketing Yin Rani.

But the opportunity is big.

Later in the panel -- titled "Man vs. Machine: Media Planning in an AI-fueled World" -- UM's chief digital officer Joshua Lowcock said in the near future AI would deliver media in a way that might feel more subtle. For example, a consumer might ask a digital assistant what the weather was like. Alexa or Google Home may say that since it's raining, the user would likely miss their meeting and, hey, wouldn't they rather grab a delicious McDonald's breakfast instead? Apparently "subtle" means different things to different people during Advertising Week. 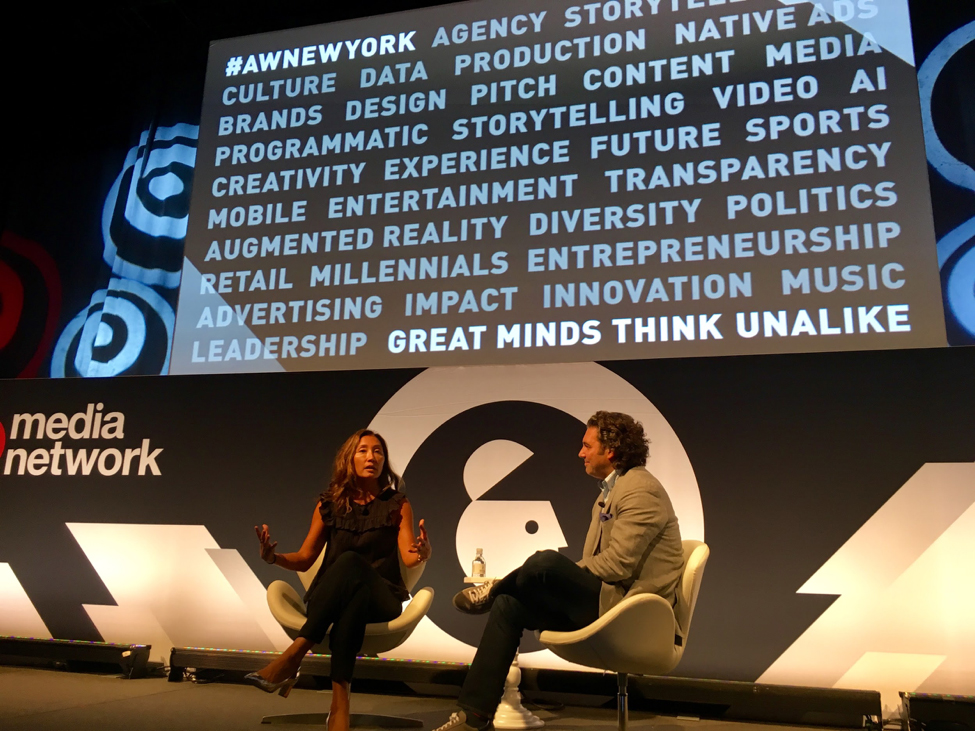 During the "How Machine Learning Drives Human Learning" panel, Carla Serrano, chief strategy officer of Publicis Groupe and CEO of Publicis New York, said – other than North Korea – she worries that creativity sometimes gets lost in the industry.

Serrano said for all the chatter about agencies needing to look and think more like consultancies, she wants to make sure the industry remembers that it's about idea generation. "No one does it better than us," she added.

Of course, Serrano is speaking months after her boss, Publicis CEO Arthur Sadoun, sent shockwaves through the industry when he announced the holding companies agencies would be sitting out all events and awards shows -- including the Cannes Lions International Festival of, you guessed it, Creativity -- in order to divert that money into building an internal platform. While data and technology are all well and good, Serrano wants to remind the world that Publicis cares -- they really care! -- about creativity first. 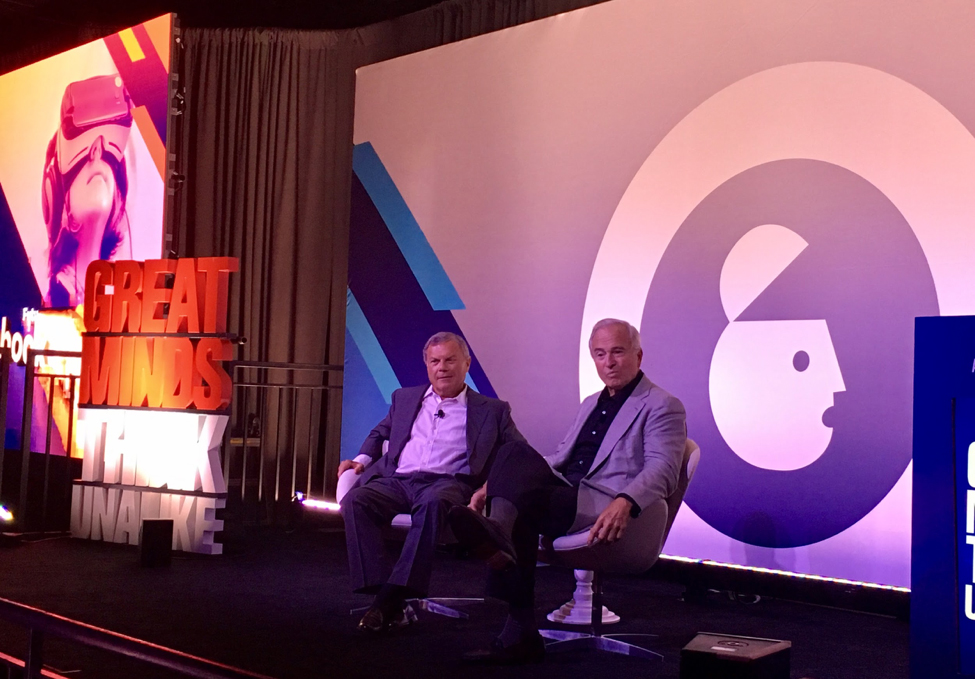 WPP CEO Martin Sorrell flipped a coin on stage with Ken Auletta, columnist for The New Yorker, to determine who would kick off the questions during their Advertising Week panel on Monday afternoon.

Auletta won the flip, but Sorrell said if he had won, he would have started with a "softball question." And he meant it literally: He wanted to ask Auletta about his softball team.

Some other highlights include the fact that Sorrell said Google and Facebook are now more of "flexible friends" than "frenemies." This shift, he said, is because with their size and scale comes responsibility, and they're under pressure from the government when it comes to regulation and brand safety.

Sorrell also said he believes the industry will eventually become more and more concentrated and consolidated, with fewer agencies and holding companies.

Oh, and Sorrell suggested that Amazon's Alexa is either a hermaphrodite or bi-sexual -- or both. When discussing the power of Amazon, Sorrell said that if you ask Alexa - "he or she - Alexa is a hermaphrodite - Alexa is bi-sexual," he said seemingly in jest - to buy the cheapest batteries, the technology will offer you Amazon's brand of batteries. 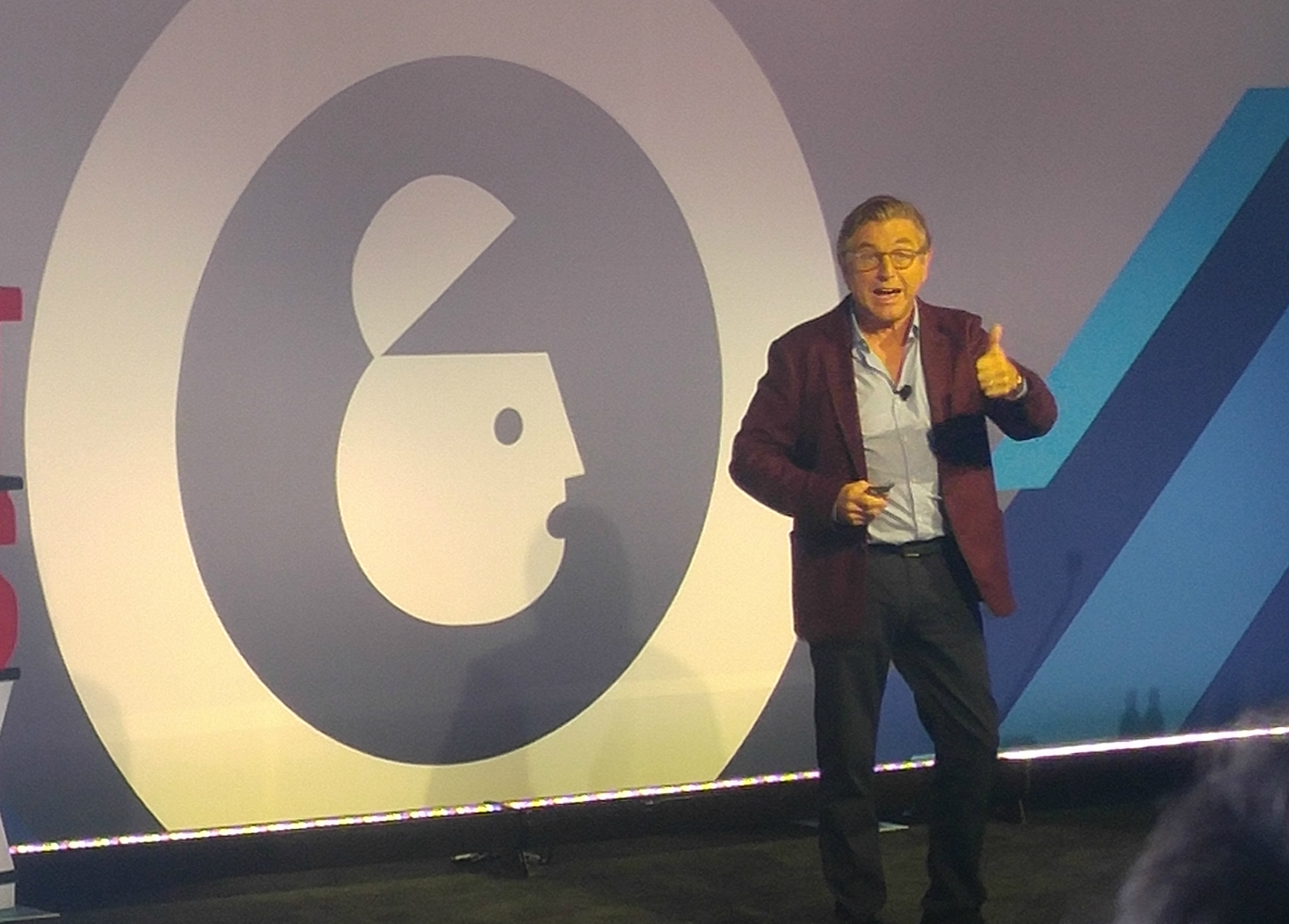 Here's a way to make the wrong impression on a guy who runs the second biggest ad budget in the world: Hit him when he's jogging. In an Advertising Week keynote, Unilever Chief Marketing and Communications Officer Keith Weed, an avid runner, recounted recently installing a running app he declined to name.

"There was an advertiser in the U.K. – I won't say which one – that advertised in the middle of my run" interrupting the app experience with a complex questionnaire, Weed says. "Who would not only advertise in the middle of a run but also give you a five-point question? We all need to think as advertisers a little more about where people are when we advertise to them."

Weed, sporting a burgundy jacket for his first of three appearances at the event, says 600 million people globally have installed ad blockers, and seemingly with good reason. "If you have a rubbish experience, they will indeed move away from your advertising," he says.

The alternative is developing content people seek out, Weed says, and Unilever has tried to move away from content that's "just bad advertising." But he acknowledged that there's a "sea of content out there, and we've all developed these marvelous bullshit filters." 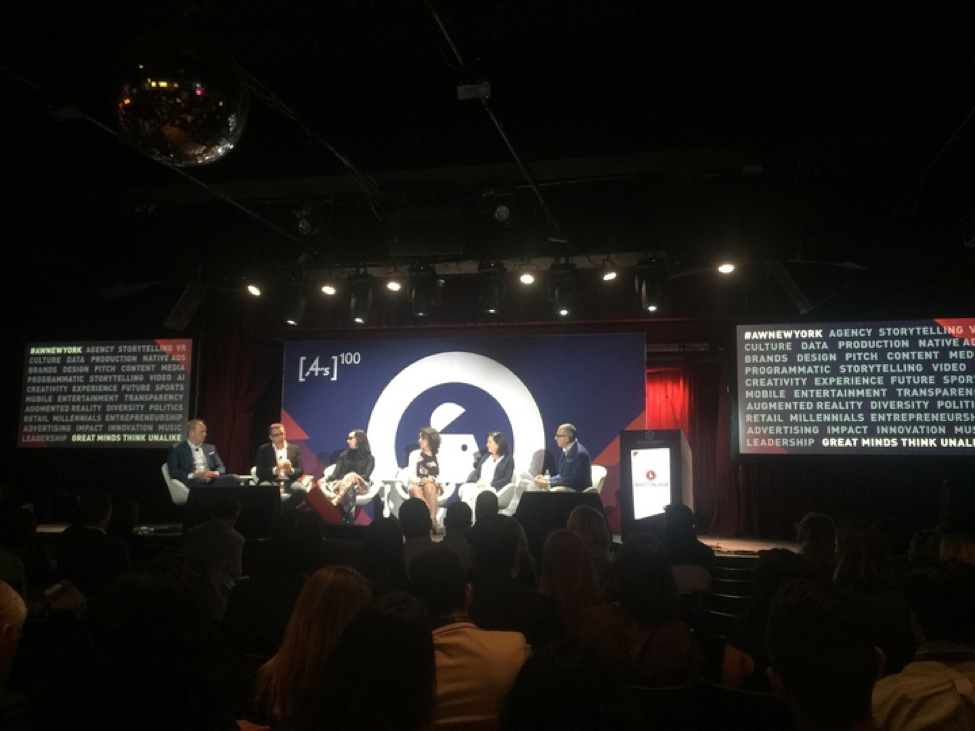 Adapt or die was the theme of the day for Andrew Bailey, North America CEO and partner at The & Partnership. He discussed the future of agencies on a panel with leaders from IBM iX, Accenture Interactive, Ai Media Group and Wavemaker.

"The agencies that are in this room today, I think they'll be lucky to be around in five years, much less 10, unless they radically transform the way they go to market and the things they do to serve clients," he said.

"We want to grow our share of problems we're solving that we're good at," he said. "From the agency perspective, everybody is putting up a consulting shingle, (but) what can you do well?" he said.

Mike Paul, president and founder of The Reputation Doctor, stopped by the Waze booth to jam out and let the company know he uses the GPS app globally.

Facebook's Carolyn Everson reminded everyone at her Advertising Week talk to start thinking about next year. (Oh God, we have to do this again next year?) She asked Ben Lerer, CEO of Thrillist Media Group and the newly formed Group Nine Media, what to expect the next time the ad world floats through Times Square. Lerer's answer: "Unfortunately, probably the same stuff."

Not that Advertising Week is repetitive (though it is) but the group spent some time on the slow-pace of change in advertising in general. Companies like Facebook and Group Nine will likely still be pressing the point to advertisers that they have to devote more spend to mobile and digital video, and that the space is underrepresented in advertising considering the amount of time spent there.

"We have to shake a little of those TV dollars out," Lerer said. "The consumer moves a lot faster than advertising."

"The question will be, as we start working with brands in this environment, how do we start understanding what success looks like there," Lerer said. "And what does branded content look like versus mid-roll [commercials.] We're eager to start doing more of that."

When it comes to believing that the advertising industry is taking a proactive approach to ensuring gender equality and diversity, younger women are more optimistic about the future than older women, according to the second annual Foresight Factory and Advertising Week New York survey.

Half of the women surveyed between 18 and 29 agree that the industry is proactively making change, while 28 percent of women 45 years and older feel this was true. On the men's side, 50 percent of both age groups surveyed remain optimistic about gender equality.

Out of the 256 executives surveyed online for the study (72 percent female and 28 percent male), only 7 percent of women agreed that it's "generally best for kids if moms stay at home rather than work," which is probably because the majority (58 percent) believe their job is important to their identity. Women surveyed also want longer paid maternity leave, with 89 percent - up from 87 percent last year – saying the U.S. should follow markets such the U.K. and Scandinavia in adopting countrywide policies that encourage longer maternity leave and/or shared parental leave.

More broadly, the gender pay-gap is still a cause for concern in the industry, with 18 percent of women thinking they received equal pay to their male counterparts, compared to 23 percent in 2016.

Tweet
Share
11:51 a.m. ET (Though it would have been earlier if Wi-Fi had been working)
Agency leaders on working with in-house agencies 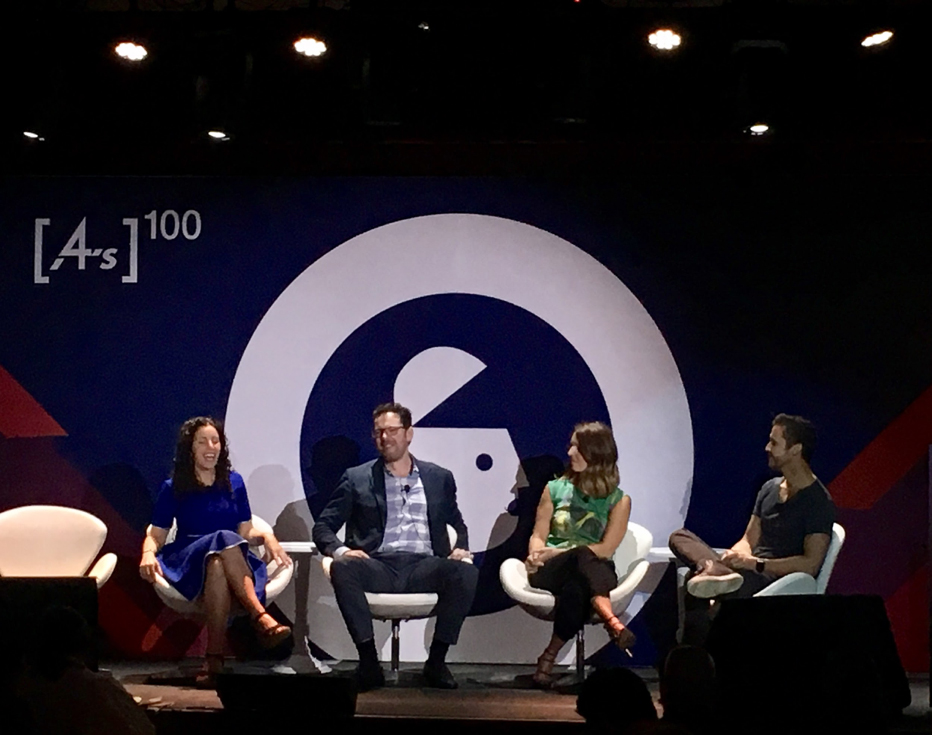 During the "Leadership & The Agency of the Future" panel on day one of Advertising Week, Sean Reardon, CEO of Zenita USA, Moxie and MRY, discussed the comparative merits of internal and external agencies. The main thing that matters -- regardless of which route a brand goes -- is whether or not a client's business is growing.

"It's about the right balance," Reardon said. "There's enough to go around and there's plenty for everyone to do."

Reardon said that the internal agency can sometimes provide perspectives on internal data and company heritage, while outside agencies can give a fresh look at a brand. "Agency leaders better keep moving and they have to share control," he said, adding that clients are now part of the agency ecosystem.

Anomaly Global Talent Director Allison Sabol said working with in-house agencies is about knowing where your skill sets lie and who is going to the do the best job for a particular task. It's about having a true and honest partnership, she said.

Sarah Hofstetter, CEO of 360i, said her chief concern is that a client is progressive – it doesn't matter what industry they're in. She said 360i focuses on knowing the client's mindset and where the client is looking to go in the future in order to form the best relationship and deliver innovative work.

Marketers can get too deep in the weeds of technology and really just need to understand what they're buying, says Mukul Deoras, global chief marketing officer of Colgate-Palmolive Co.

He's been publicly mum on transparency issues up to now, unlike counterparts at Procter & Gamble Co. or Unilever. But speaking Monday at the Modern Marketing Summit, a sideshow to Advertising Week, Deoras appeared unconcerned if his media agency is acting as an agent or a third-party reseller of inventory as long as he knows which it is. By comparison, Procter & Gamble Co. Chief Brand Officer Marc Pritchard earlier this year said his company was shocked to learn of an instance where one of its media agencies was acting as a third-party reseller, in keeping with the contract but not P&G policy.

The more important aspect of transparency is from media players like Facebook and Google "ensuring our ads are seen by the right people at the right time in the right place," Deoras says.

He also believes the agency of the future might not be that different from his agency of the present – WPP's Red Fuse – a collection of more than 100 people from throughout the holding company. "They don't work for anyone else," Deoras says, "and we don't work with anyone else." Deoras agrees with a statement last year by Pritchard about agency complexity: "It's not the client's problem to coordinate across agencies," he says.

And he thinks agencies will move beyond messaging and media to "brand experience" that includes products and retail environment.