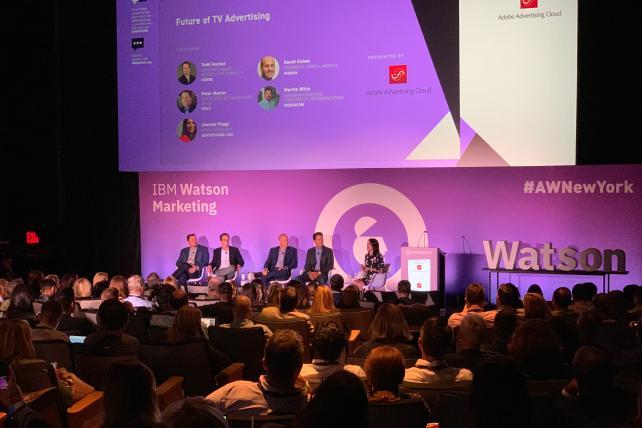 You probably weren't wondering, but here's how our heads feel this week

If anyone was wondering what the @advertisingweek head looked like if you closed the lid ... #AWNewYork pic.twitter.com/FTla5JJKfU

Stat of the day
According to The Female Quotient CEO Shelley Zalis, who also helps lead the #SeeHer initiative, 85 percent of consumer products purchases are influenced by women, yet 40 percent of women do not identify at all with the women they see in advertising. -- Megan Graham

Recency bias
Streaming music listeners are less inclined to rock out to the classics. About half of all music being streamed on digital subscription services was recorded in the past three years, according to Barak Moffitt, evp of content strategies and partnerships at Universal Music Group. The music label is having a hard time getting streamers to listen deep into the catalog, just one of the challenges in the digital music era.

Moffitt was speaking on a panel called "Driving the Future of Voice Activation." One of the benefits of voice-activated speakers is they are easy to use, meaning even technically-challenged people can ask Alexa to play hits, including those more than a few years old.

But listeners also often ask voice assistants to set the mood, not to play a specific artist, and don't always even think about who comes on. Universal is rethinking how it inputs metadata to solve some of the problem, Moffitt said. Songs and artists can improve their odds of appearing in a computer-generated playlist by making sure streaming services have the right keywords to go by. Brands might want to learn a few things from bands when it comes to the voice-activated future on the invisible shelf. -- Garett Sloane

Crowd management was obviously the idea, and a good one given the vertical layout of the AMC Lincoln Square 13 movie theater where Advertising Week sessions are taking place. In the end, this session was only about half full—the left half. -- Nat Ives

Clash with the consultancies
"The agency landscape is changing," said Kate MacNevin, Global President of MRM/McCann during a panel with Bobbi Brown and SoulCycle CEO Melanie Whelan. "We are facing a lot of competition from consultants. So I think the agility and velocity of agencies to change their offerings to compete against consulting — things like embedding, MRM Inside [the agency's method of embedding resources at clients], being in your client's organizations and having those relationships at a different level — is also a big area. How do agencies evolve that offering to meet the needs of today's clients, today's brands?" -- Megan Graham

Perfection eludes us
Artificial intelligence continues to reap a storm of over-excited publicity, but the worst may actually be over.

"We are not on the peak," said Dmitri Tchikatilov, head of worldwide business development for advertising at Amazon Web Services, invoking the "Hype Cycle" proposed by the research firm Gartner. The model describes five stages, including an initial burst of speculation, a "peak of inflated expectations" and then disillusionment and more realistic views.

"We are going down into reality," Tchikatilov said.

Tchikatilov and other panelists talking about how machine learning can "make human creativity better" also agreed that AI can't come up with big ideas. They suggested, however, that people still need help.

Comparing ads' content with their performances taught the hospitality conglomerate IHG that it needs to test and optimize its creative, said Michael Menis, senior VP for global marketing services. "It is impossible to get creative right," he said. -- Nat Ives

Navigation, part 2
Hope you wore your walking shoes, folks: Advertising Week this year is not for the faint of heel. Case in point, some of the panels held on the second floor require attendees to go out the back staircase and out onto the street — meaning you have to circle the block and re-enter at the front. Then there's another trek up the (broken, as of Tuesday morning at least) escalator before you run to your next session. At least I'm getting in my cardio. -- Megan Graham

Check your (computer's) privilege
A tale of narrowly averted disaster from the "Making the Case for Infusing Diversity in Design" panel:

Software that renders virtual environments includes avatars of people, useful for populating a mock-up of a building for a client to see, said Wesley Crosby, principal and interior design director at architecture firm Populous. But two designers working last-minute presented a mock-up of an event where all of the attendees were represented by white avatars and all of the servicepeople and staff were people of color. The designers hadn't done it intentionally—those were the default selections in the software.

Luckily, Crosby caught it before a client saw it. -- I-Hsien Sherwood