For nine years, Advertising Week was just a New York thing. But in 2013, it arrived in Europe, marking the start of an aggressive global roll out wound up taking the event to Asia last year.

Latin America is scheduled for fall 2017, then Australia in 2018. Beyond that, Africa will be the next stop in world domination -- if organizers have their way.

The ambition of Matt Scheckner, executive director of Advertising Week, seems stoppable only by major world events. Last year, Advertising Week Cuba was all set to go, with Tiger Woods and Jessica Alba booked to appear, when Fidel Castro died.

"The country shut down for nine days," Mr. Scheckner said. "We had two Jet Blue planes ready to leave. I was heartbroken." Asked if there are plans to resurrect Advertising Week Cuba, he said, "I think the moment may have passed. I was a big advocate for it."

London, host to Advertising Week Europe, is now getting ready to stage the event for the fifth time, starting on March 20. Heavier on substance than flash this year, Advertising Week has dialed down the celebrity factor in favor of politics, which, along with AI, VR and transparency are the big topics for 2017.

Mayor of London Sadiq Khan will take the stage at an event on March 23. "Sadiq embodies a lot of values consistent with our values, like being inclusive and open for business," Mr. Scheckner said. "Juxtapose those with our president's [values], and they are more important than ever before."

There will be two seminars in London led by speakers from Nigeria and South Africa, showcasing the African mobile story. The African delegates are also here for another reason: as part of a move towards making Advertising Week Africa happen. "Our best way forward is to come and see it and participate," Mr. Scheckner said.

Advertising Week's international events feed into each other. "Town Hall" style debates were introduced in Tokyo last May, and the genuine argument and analysis they introduced made them so popular that they were featured in New York in September. This month, the Lyric Theatre in London has been secured as a venue for "Town Hall" debates at the Europe event.

Now that Advertising Week has grown into such a large-scale global operation, local teams in each location, including the content review committee in New York, are "the secret strength of the whole thing," Mr. Scheckner said. 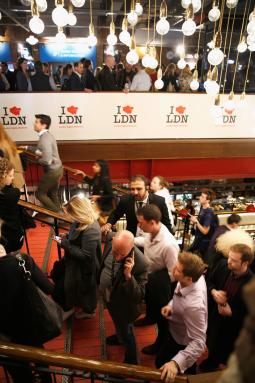 An event in London during last year's Advertising Week Europe.

But the series is only as good as its last event. "We've done 18 of these between New York, London and Tokyo," he said. "If the 19th doesn't sit so well we may not be back for the 20th. We live in public, in a very transparent way."

So what keeps him awake at night during the hectic Advertising Week schedule? "I don't sleep a lot but I sleep pretty good," Mr. Scheckner said. "I draw tremendous energy from the events and from talking about challenging issues. Not everything is great in the [advertising] business, but you have to keep a positive spirit."