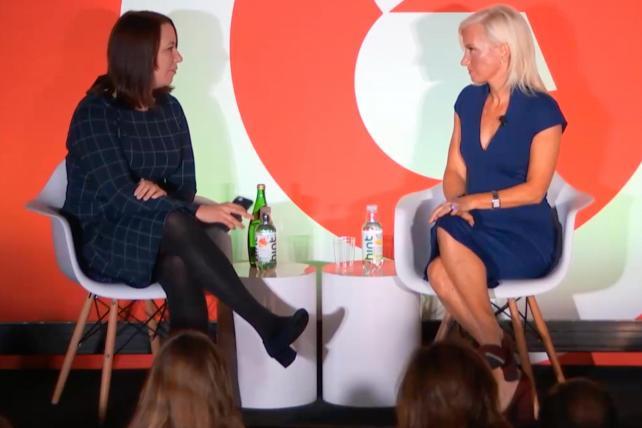 Diversity and inclusion were dominant themes of the opening day of Advertising Week, as they likely will be for its entirety. But that wasn't the only story on stage, or between events.

Gender balance, part one
I'm moderating five panels during Advertising Week, and of the 15 speakers on those panels (not counting myself), just two are women. Interesting considering there are more than a half dozen panels on Monday alone focused on gender equality, diversity and inclusion. -- Jeanine Poggi

Warby vaper
Brands know the typical cannabis consumer is hardly Cheech or Chong, but less than 2 percent of cannabis retail experiences reflect that, according to a panel sponsored by Prohbtd, a marijuana-focused media company. Players in the space should consider designing brick-and-mortar outposts as modern and experiential as those by direct-to-consumer brands like Allbirds and Warby Parker, panelists said.

"If I had a pack of joints in my purse that was beautiful and nicely designed, you might think twice about what that product is and the status," said Shannon Belisario, director of brand development at Prohbtd.

Turns out Advertising Week attendees like weed: "I was hoping they'd give out samples," one woman said after the panel. -- Adrianne Pasquarelli

Editor's note!
You wouldn't have noticed a blip in the programming at the "Culture" stage today, which is a testament to the AV team's professionalism. But ahead of the Prohbtd panels this afternoon, a mouse ran amok in the sound booth, causing no small amount of consternation. AMC staff was hailed; AWNY goons conferred. Ultimately the rodent couldn't be located. Perhaps it found its way to the The Walt Disney Company Stage? Squeek. -- Brian Braiker

Vertigo
The goal of moving Advertising Week to Lincoln Center from Times Square was to reduce its sprawl. But it's also made it more ... vertically integrated. The escalators at the AMC Lincoln Square 13 movie theater, where all the daytime programming has been concentrated this year, were consistently swarmed to the point of claustrophobia. Also: only one sink worked in the ladies room on the fourth floor. -- Judann Pollack

A tale of two testimonies
"Women often have an entirely different perception of what the fuck just happened," Wieden & Kennedy President Colleen DeCourcy said during a panel called "The Girl Gaze," referring to the conflicting stories of Brett Kavanaugh and Christine Blasey Ford. "When women's voices are absent, we're missing an entire angle on what's going on. Truth needs a lot of points of view before it can be trusted by everyone."

There needs to be a multitude of underrepresented voices, said GirlGaze Founder Amanda de Cadenet, recalling photos of Ford staring down an all-white, all male Senate panel. "It's not an honor to be the only woman. I want to have peers," she said. "I want shared experience. I want more people in the room."

That's the danger of letting one story define an entire community, said Natasha Alford, deputy editor at The Grio. As a beat reporter years ago, "when it came to black and Latinx communities, it was often stories of crime, of poverty that I was being assigned to tell," which pushed her to leave local news for digital outlets that were better equipped to tell more inclusive stories.

But even successful women who can speak up on their own terms need to be prepared for backlash from people who want to silence them, de Cadenet added. "Get used to not being liked." -- I-Hsien Sherwood

What's up
Carolyn Everson doesn't seem impressed with privacy martyrs Jan Koum and Brian Acton, the WhatsApp co-founders who sold their invention to Facebook in 2014 but have lately become publicly critical of their owner.

"Brian and Jan sold the company for a lot of money, $19 billion," Everson said on stage. "They both did very well," she said. "I would love to hear them talk more about their philanthropy."

Everson was responding to a recent Forbes article in which Acton lamented selling out WhatsApp's users for Facebook riches. WhatsApp, which now has 1.5 billion monthly users, was built as a free service. Its founders have always hated advertising, and they claim Facebook promised not to move too quickly to squeeze revenue from their messaging users.

While Everson seemed to suggest that the WhatsApp founders should concern themselves less with Facebook and more with how they spend their riches, both Koum and Acton appear to have some philanthropic endeavors, with both funding charitable foundations. (Koum and Acton did not respond to requests for comment on Monday.) -- Garett Sloane

Say cheese (or biscuit?)
At SXSW for years, the celebrity to line up for was Grumpy Cat. At Advertising Week, it's Bullseye, Target's mascot dog. Lines to get pictures with the miniature bull terrier were so long that it was tough to get into the Target Media Center Stage for programming. Did anyone ask him how he felt about his face paint? -- Judann Pollack

Netflix ads
The economics of streaming video-on-demand platforms like Netflix don't work in the long-term without ads, according to Brian Lesser, CEO of Xandr, AT&T's advertising and analytics division said in a keynote address on Monday. "The SVODs can't pay for all the content without some advertising model," he said, predicting that Netflix will eventually sell ads.

Lesser, who joined AT&T from GroupM exactly one year ago yesterday, is looking to build out a programmatic exchange for TV inventory, but doesn't expect the very best stuff to be sold in a biddable environment any time soon. When will marketers be able to use ad tech to buy commercials in the Super Bowl? "Who cares?" Lesser said. "That sells itself. It is everything else that's undervalued that we can help with."

Lesser also predicted that advanced TV will get multiple "currencies," or measurements brands and their buyers will use to make deals. But he doesn't want measurement in TV to look like one of the big measures in digital. "I hope it doesn't look like last click, because last click is garbage."

Perhaps the biggest obstacle to Lesser's effort to build a more targeted and efficient TV ecosystem is the people, he said. "The industry is fraught with egos," he said. "Thankfully I have low self-esteem so I work well with these people." -- Jeanine Poggi

Gender balance, part two
"The days of women stepping on each other's backs is past," Walrus CEO Frances Webster said at a "Run It Like a Girl" panel sponsored by her agency. Of course, women could also use some male allies. While Monday's panel was packed with women ("Go ahead, ladies," said the male usher taking tickets), men were few and far between. -- Adrianne Pasquarelli

The gender pay gap robot being put in the closet is the best metaphor I can think of. #AWNewYork pic.twitter.com/2gq8HgZ4Tw

Hat's off
R/GA wants you to know that it really knows transformation, hosting a panel of five R/GA executives called "Transformation at Speed," all about the "briefs that every brand should be tackling to transform their business, customer experience and marketing," and including agency founder Bob Greenberg. "When we fully transform," R/GA exec Barry Wacksman joked, "Bob will switch from a black beret to a MAGA hat." -- Judann Pollack

Fair isn't fair for everyone
Time's Up Advertising announced the creation of a women-only "safe space" for agency employees coming soon to Fishbowl, the professional networking app. The "bowl" will host AMAs (online Q&As), post polls and act as a support network with privacy settings and private direct messaging capabilities, they said during a panel that was a follow up to the group's first meeting, in May.

The panel also addressed some of the complaints about that May meeting. A Q&A system let women in the room then vote suggested questions up to be answered before others, an approach intended to be democratic and fair. But women of color in the room saw their questions drop to the bottom of the pile and go ignored. Those women included Kai Deveraux Lawson, project director at Mission, who brought the issue to the group's attention, and discussed the situation Monday.

The situation was ironic, said Time's Up Global Chief Marketing Officer CMO Rachel Terrace. "Every woman has felt the way you felt that day, but in different rooms" that were run by men. -- I-Hsien Sherwood

A different echo chamber
Panels held in the 4th floor IMAX theater suffered from a little too much legroom. Even with 100 people in attendance, the venue felt cavernous and empty. The space would have been better utilized as a showcase of work. Hell, put case studies on a loop so attendees can kill some time between sessions (or catch a quick nap in the dark). -- I-Hsien Sherwood

Brands in command
"How can you reach the consumer if you're not representing who the consumers are?" Interpublic Group CEO Michael Roth said on a panel about diversity and inclusion. "If 80 percent of the consumers now making decisions are women, if you don't have women sitting on your creative teams, your strategic planning teams, you're not going to have the insights that are necessary to develop messaging that relates to the consumer. So if you don't have it, clients won't do business with you." -- Megan Graham

Don't fit in
Things got personal at a panel on redefining bravery moderated by DeCourcy (who seemed to be everywhere Monday). P&G Chief Branding Officer Marc Pritchard, who only recently revealed that he is half Mexican, said his dad had told him he would get worse jobs if he called himself anything but "Caucasian." Pritchard called it a "lesson in privilege."

Keith Cartwright, exec creative director at 72andsunny and a founder of Saturday Morning, said the tendency in a room full of people who don't look like you is to try and fit in. "What you need to find a way to stand out," Cartwright said, prompting the room to burst into applause. -- Judy Pollack

CORRECTION: An earlier version of this article erroneously identified the director of brand development at Prohbtd as Shannon Bellsario. Her surname is Belisario.