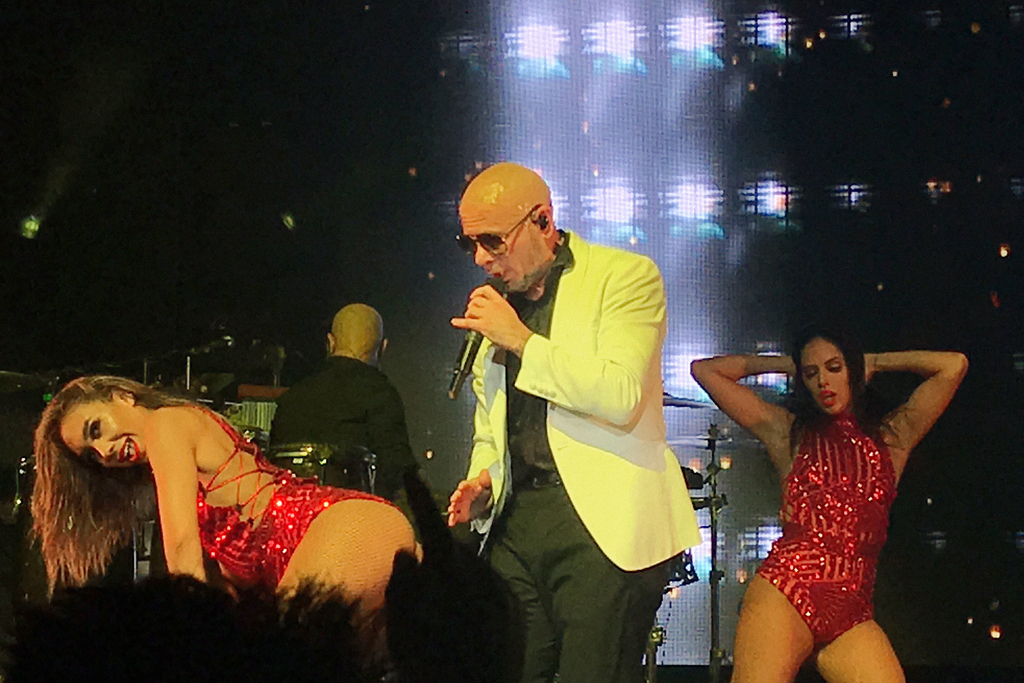 In an industry that has long battled sexism, Advertising Week made a concerted effort in its programming this week to address issues of equality and parity. There was an entire track Thursday called "Future is Female," with seminars titled "Fighting Bias" and "The Business Case for Female Inclusion." Another track on Monday was devoted to "Diversity and Inclusion."

So many industry execs were surprised and even disappointed with Advertising Week’s choice of selecting Pitbull as the headline act on the closing night of the event.

The audience at the packed concert venue at Webster Hall on Thursday night might have enjoyed the flashy spectacle (and open bar), but stepping back from the glitz and confetti, advertising industry professionals are saying Advertising Week was a bit tone deaf, and lacked introspection. Pitbull, flanked by backup dancers wearing sparkly red thong one-pieces, performed choreography full of booty-spanking and objectifying gestures. Many say it was a performance at odds with the many of the conference’s panels in the days leading up.

“Advertising industry closes week of diversity and equality panels with an empowering display of twerking and booty-slapping,” wrote Matt MacDonald, group executive creative director at BBDO, in response to a video Ad Age shared on Twitter of his performance of “I Like It.”

The conference, in its 16th year, is meant to be a celebration of the industry and its successes. One panel was called “Corporations & Compassion: A Discussion on Masculinity." The “Gender Parity–It’s Complicated” panel which revealed new research from She Runs It that shows a decline in women leaders. After all that, Pitbull’s performance seemed to undermine the entire week.

“In an industry that sells first and foremost to female consumers, but continues to be male-dominated and massively power-imbalanced when it comes to women … and to talk gender equality, diversity and inclusion but spectacularly fail to deliver on it, it is wholly inappropriate to feature a closing Advertising Week musical act that objectifies women,” says diversity advocate Cindy Gallop, former exec at BBH, founder at MakeLoveNotPorn and board advisor at We Are Rosie, in a statement.

You know what the advertising industry REALLY needs? More examples on how objectify women!

When you realise that all the awards for exceptional women in the industry, the diverse panels, the many many many articles in trade magazines may not have actually made a difference... What a shit way to end the week. https://t.co/PJ9De19ChK

Some wondered how difficult it would have been to hire a female performer who embodied some of equality themes of the week. Pitbull himself, however, was at the conference for a panel called “Reinventing Storytelling for Multicultural Audiences.” He had been on hand to announce the news that his new multicultural agency, 305 Worldwide, created with Horizon Media, had taken on its first client: Boost Mobile (Ad Age spoke with the rapper ahead of his concert on Thursday). The idea of hiring him as a headliner may have been an afterthought on the part of Advertising Week.

Advertising Week has not responded to a request for comment.

Others commented with some snark that the choice of Pitbull was outdated. Pitbull, whose songs include "I Know You Want Me" and "3 to Tango," got his start in the 2000s, and his debut album “M.I.A.M.I” came out in 2004. Nearly 20 years later and the superstar is still performing, and announced a new album at the performance. But, for many, his heyday has passed.

Just like the ad industry that does shit outdated af.

For observers who feel pushback against Pitbull is much ado about nothing, Gallop says, hold on.

"For anybody leaping to Advertising Week's defense on this front, for the women in our industry, it's not just 'this one thing', it's the cumulative effect of so many things like this," she says.

Pitbull himself managed to work a message of inclusion into his act. “Music brings everybody together," he said from the stage. "It has no barriers. It has no boundaries. It definitely has no borders. And it has no limits."