Harris Diamond and Mark Penn square off at Advertising Week 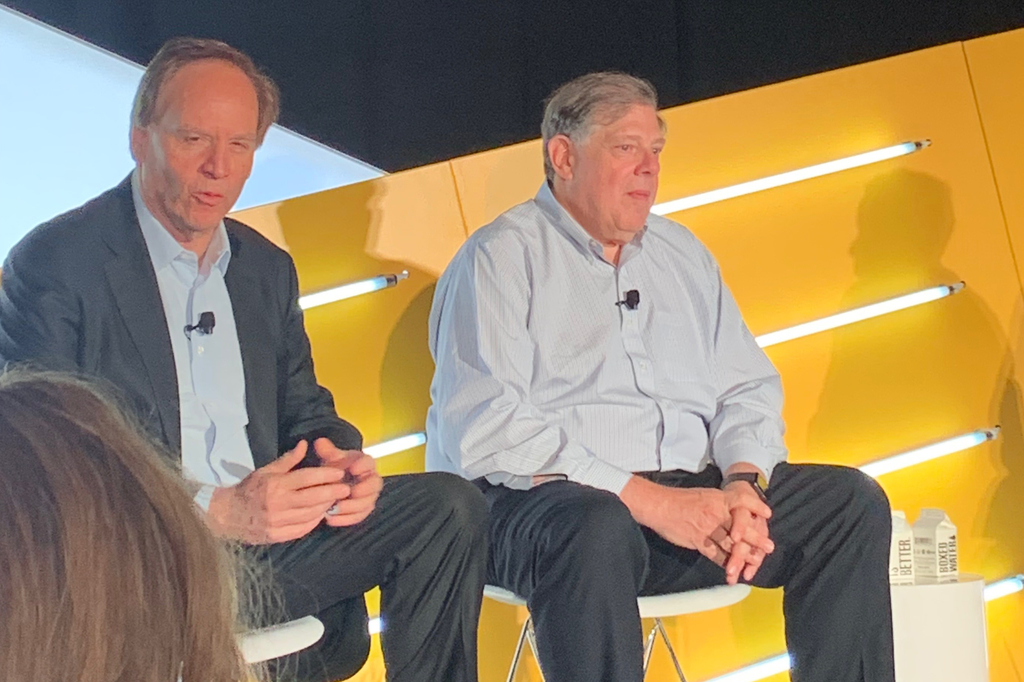 An Advertising Week discussion on political marketing fittingly turned into a bit of debate as Harris Diamond, chairman and CEO of McCann Worldgroup, squared off with MDC Chairman-CEO Mark Penn over the coming election and what role marketers should—and should not—play in it.

Penn, who is also president and managing partner of Stagwell Group and who spent much of his career as a political consultant, urged caution for brands who weigh in on the election and social issues. Diamond, while generally agreeing that marketers need to pick their spots, was more of mind that consumers today expect—even demand—that their brands take a stand.

It can be risky. The problem with going negative, says Diamond, is that “politicians have leeway to do it. We don’t like them.” But when corporations do it, consumers are likely to say, “Now, I don’t like you either. It’s a dangerous thing for corporations to follow politics too closely.”

The discussion began with political spending and how more d-to-c style marketing is seeping into politics. Both cited Elizabeth Warren as an example of a politician who is running a grassroots campaign in that mode with rallies and selfies with supporters. Or, as Penn says, she’s gathering “first-party data.” Neither felt candidates will lack for financing. Penn said in the past, his candidates were jealous of budgets for hamburger chains, but today the candidates have “$2 billion to spend and a major factor driving up media prices” this cycle will be political ads that winnow inventory.  “Money today is no longer an issue” in the election, agrees Diamond.

Penn says there will be “100-percent saturation” of political ads leading up to 2020. Diamond interjected that it will be “100-percent negative.” And that, he said, will force a retreat among marketers. “We have seen marketers step up bravely and take positions on policy and get lauded” for it, particularly among millennials, he says. “Once these negative campaigns start, I think we will see a retreat into a quiet murmur.”

On that point, Penn demurs. “You have to be careful not to over-read these studies,” he says, noting that consumers, when asked whether they prefer to buy from a socially responsible company, are not going to say no. So they might not be as anxious to see a brand take a stand. And if you do, and that stand is not consistent with your brand, “you can fracture it,” he says.

Harris, on the other hand, argued that liberals with high education are looking for brands to take positions on social issues. He says that doesn’t necessarily mean they will buy more, but that they will like a company more. Citing Walmart’s recent decision to discourage open carry of guns in its stores, he noted that it was a decision “uniformly approved” by the American public.

Penn fired back: “The best thing you can do is take a brave position that is also supported.” He added that brands need to vet a position before they take it. “Don’t suddenly launch into this pond. Politics is hard enough for a politician. When marketers get involved you really have to be careful to do it right.”

Penn advocates raising a caution flag before brands take on a cause. He says that while say 90 percent of people say they support fixing climate change, when you get down to tactics—like a carbon tax—the percentage of supporters decline. Still, he says “that doesn’t mean you shouldn’t be part of the sustainability movement.” He drew a laugh recalling his work with BP in this arena, “until a plant blew up and they had to change their strategy.”

Penn, pollster that he is, cited a string of statistics about how many Americans are unfavorable to Democrats and Republicans. “The American public now likes no one,” he says, noting it’s like choosing between two bad products.

But when it comes to brands, Penn thinks going negative can be a good thing. “If you are up against a company with an inferior product,” he says, you should say that to consumers because “nobody else is going to tell them.”

“Corporations should do more comparative advertising,” says Diamond, but they should talk about things like the science behind them or their ingredients. “Don’t just go out and say the other one is a piece of garbage.” He says in this litigious age brands can expect a letter from the rival’s attorney, which gives pause to some marketers, “but I argue that they should do more.”

The difference between brands and politicians, says Penn is that “Every politician wants 50 plus one” percent of the votes. But corporations want “99 plus one. We want everybody to buy our product.”