The Ad Age slack has been rife with complaints about spotty Wi-Fi and long lines and, well, spotty Wi-Fi for the past couple days. In any event, we may have struck upon an idea that spares attendees inconvenience … and makes a little money for Advertising Week! 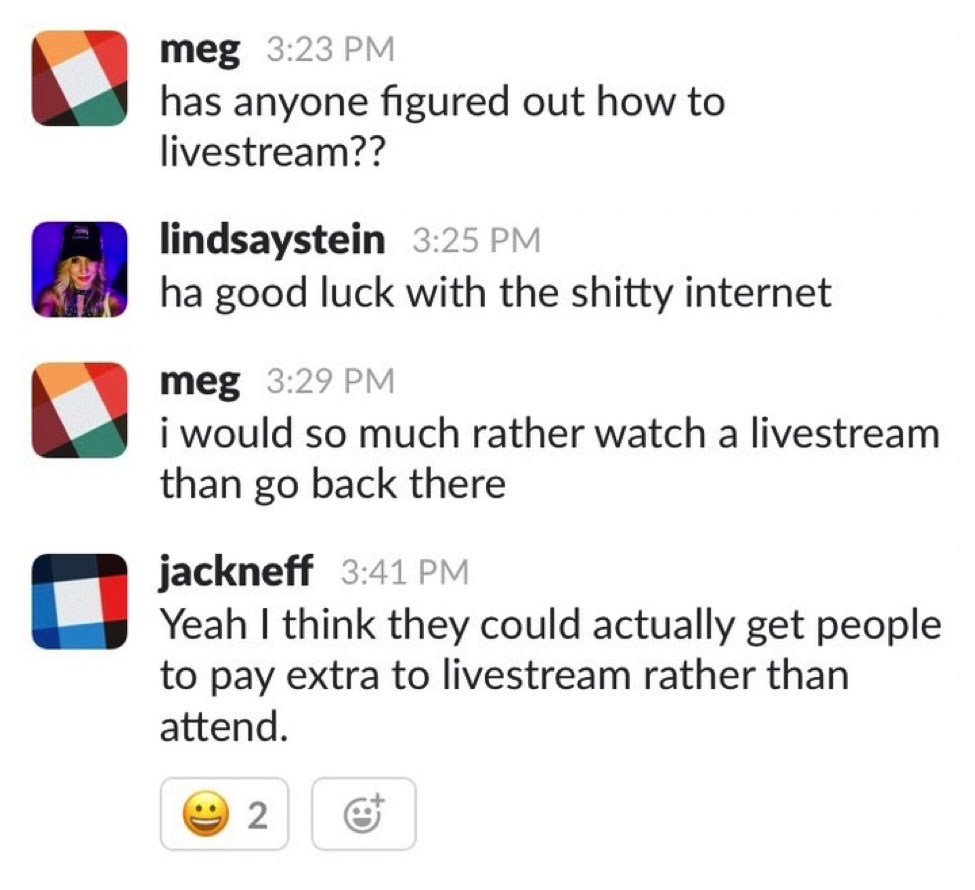 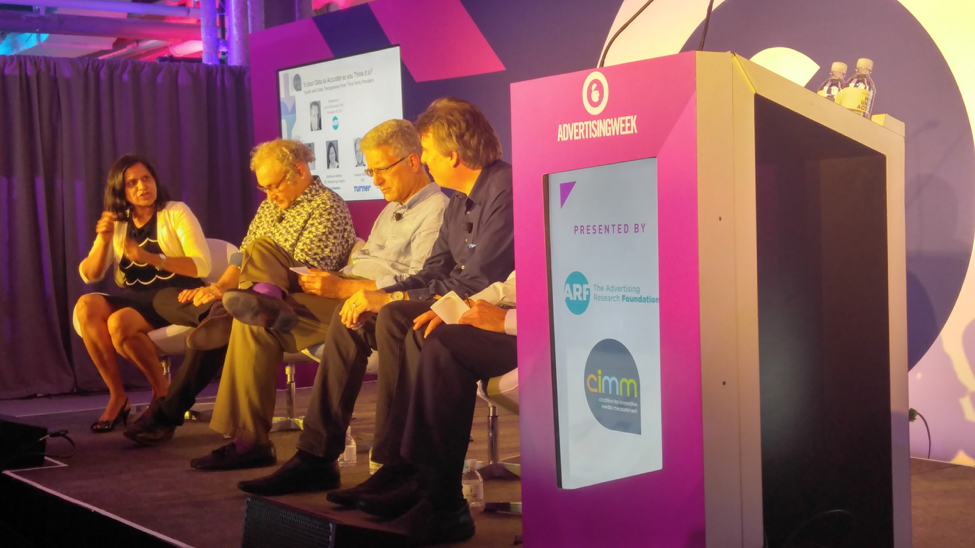 Not every Advertising Week panel is devoid of diversity. Market research and data analytics might seem like a white-guy-intensive side of the industry, but a panel on Tuesday led by the Advertising Research Foundation and Coalition for Innovation in Media Measurement did have two women out of 10 total panelists (in two waves). They were Abhilasha Mehta, senior VP of marketing insights and media analytics of Bank of America, and Jane Clarke, CEO of CIMM. They were joined by Louis Jones, exec V of media and data of the 4A's, an African-American executive. And, contrary to Cindy Gallop's observation regarding some thinly attended diversity panels, the room was packed.

China's internet giant Tencent sponsored two Monday sessions that started with lengthy sales pitches by Tencent execs, and ended with panels that included a few other people, who mostly praised the company and its products like the ubiquitous WeChat app. (From Bonin Bough: "If you're not doing WeChat in China, you're wasting your life.")

Advertising Week has been criticized for lack of diversity, and yet the great majority of Tencent's audience was Chinese, many of them students. They probably understood a TripAdvisor case study video, which was shown in Chinese rather than English.

In addition to Monday's fare, Tencent commandeered a two-and-a-half hour programming block to present sessions including "Winning With Tencent and WeChat" and "WeChat Pioneers" on Tuesday.

If you learn nothing else at Advertising Week, remember this: 58 percent of all the time Chinese spend online is with Tencent products. And marketers like L'Oréal and McDonald's love them. Just ask Tencent. 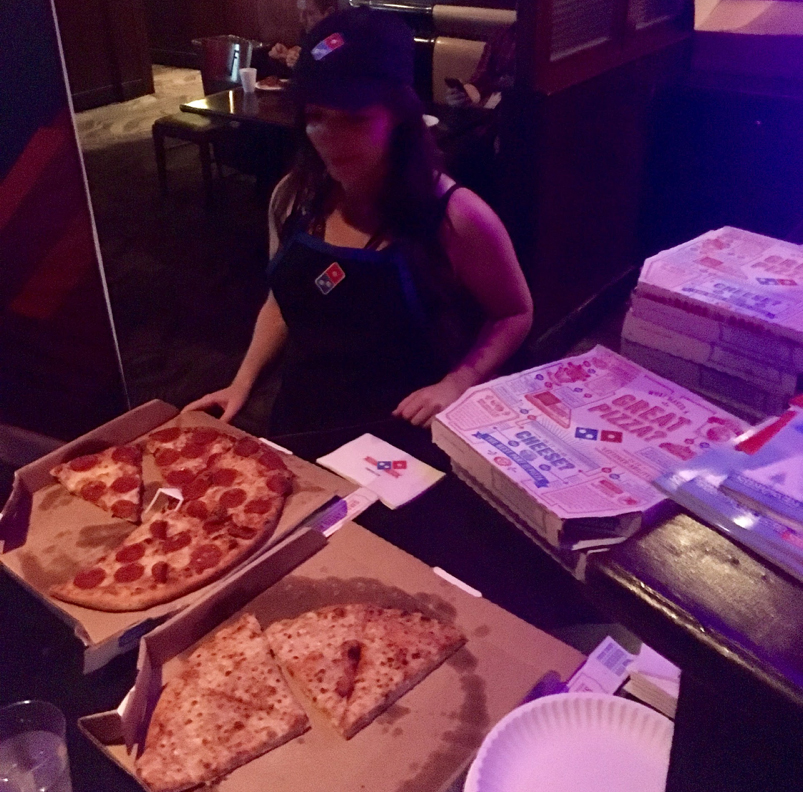 Here's one way to get people to come and stay for your entire Advertising Week session: Feed them.

Domino's and CP&B catered 15 pizzas for the audience during its panel Tuesday afternoon about their long-term relationship. The pizza chain recently re-upped its agreement with CP&B through the end of 2020 after already working with the MDC agency since 2008. The pair discussed their shared values as well as some of their hit campaigns over the years, such as the "Pizza Turnaround" initiative in which the chain admitted its pizza wasn't great and replaced its recipe with a different one that won people over. The effort, which launched in December 2009, led to major same-store sales gains. And yet, there was still pizza left after the discussion was over -- which speaks either to the popularity of the pizza or the slim attendance at the panel. We report, you decide!

Brand America has suffered at the hands of of Donald Trump, said Lucie Greene, worldwide director of The Innovation Group at J. Walter Thompson. She was on hand to discuss a recent Pew Research Center study done in 37 countries this year.

Only 22 percent of respondents expressed confidence in Trump doing the right thing in world affairs. That's barely a third of the 65 percent who expressed confidence in former President Barack Obama in a previous survey. And the number of international visitors to the U.S. in the first quarter of 2017 fell by 4.2 percent, or 700,000 people, from the same period last year, according to the United States Department of Commerce.

In JWT's own research of 3,000 consumers in six countries, more than 40 percent of respondents from the U.K. and Mexico have a negative view of America, due mostly to the recent actions of the U.S. government, Greene said.

On the plus side, consumers don't seem to be blaming American brands. Approval ratings of U.S. brands range from 78 percent in the U.K. to 93 percent in India and China, and haven't changed since 2012, indicating that consumers distinguish between Brand America and American brands, according to JWT's research.

"I was surprised it didn't carry over to brands, but that made me feel very encouraged," said JWT CEO Tamara Ingram.

At an event about storytelling and selling in a mobile-first world Tuesday, executives on a five-man panel called "Where Storytelling Meets Selling in a Mobile First World" highlighted the importance of billboards, even as digital gains ground.

24 Hour Fitness, a gym chain with over 400 locations, uses out-of-home as part of its larger marketing strategy. The ads introduce new fitness programs or activities that the marketer then supplements with more digital or radio marketing to explain in greater detail the new offering, Tom Lapcevic, executive vice president and chief marketing officer at 24 Hour Fitness, said.

"When we integrate out-of-home and radio, coupled with highly targeted segmented communications, there's a significant difference," he said.

Andy Stevens, senior vice president of research and insights at Clear Channel Outdoor, noted that, "Out-of-home is one of the few channels where there's no way to block it, apart from closing your eyes."

Stevens also copped to using an ad-blocker on his desktop computer. As a subscriber of Netflix, Spotify and mobile news, he is basically the embodiment of industry's worst nightmare. 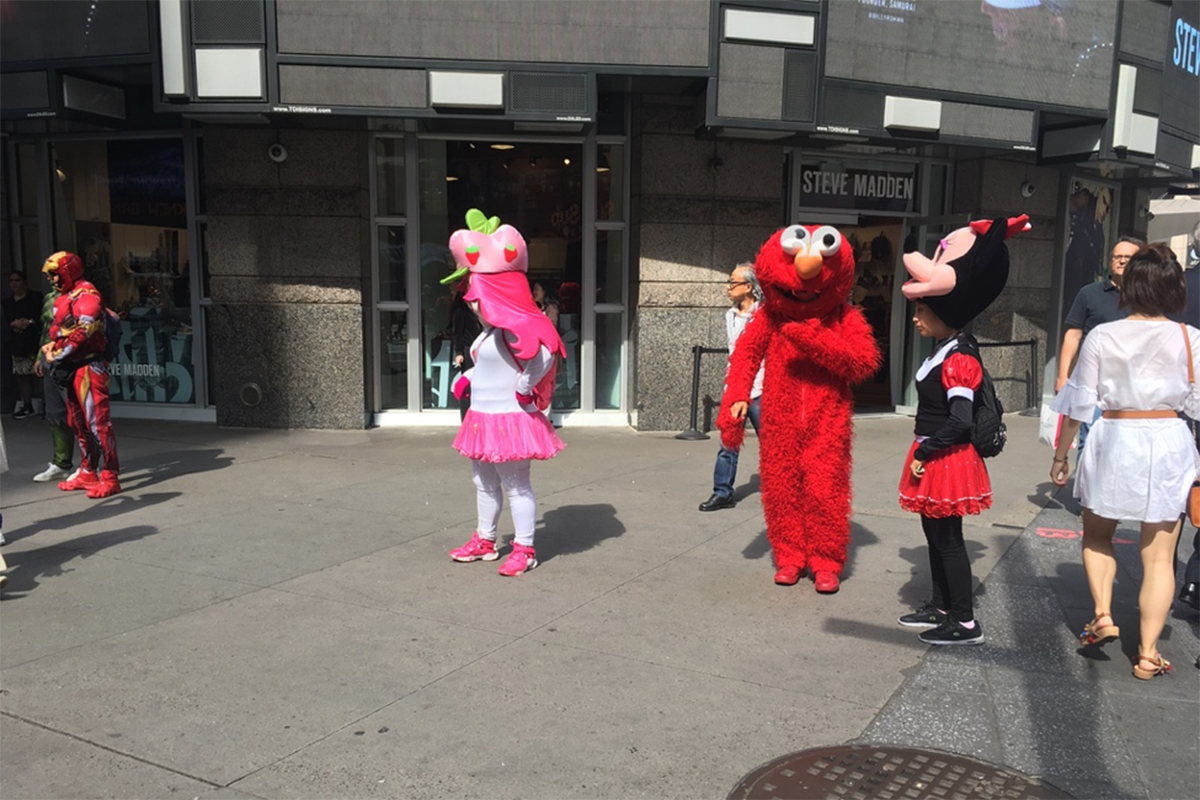 Here it is: The most diverse panel at Advertising Week!

Ad Age editor Brian Braiker moderated a panel on "The Next Era of Programmatic" with executives from OpenX, The Washington Post, Pandora, Adobe and Nielsen Marketing Cloud earlier this afternoon.

The discussion ranged from best fixes for last-click attribution to viewability standards to the risk of latency when it comes to data-driven creative served programmatically.

On brand safety, which has been a particular headache this past year as brands have found their ads popping up against unsavory content, the panelists agreed that transparency is critical to future success.

Panelists also touched on the question of whether "winter is coming" for adtech and martech companies as mergers and acquisitions in the space reach a fever pitch.

Cadogan said what's to come will be much more "like a British spring."

"The days are longer, you're getting some sun" but you're still getting some squalls, he said. There's enormous potential in the space: The industry is growing strongly — and, he said, it's likely to become the default way digital media is transacted. 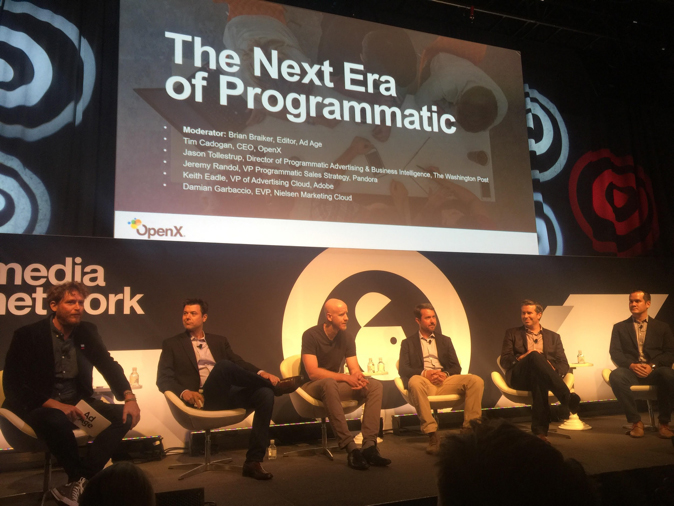 On a not-entirely related but still somewhat-related note: Look at all those white dudes! Good thing this wasn't a panel on diversity. With so much of Advertising Week spent discussing -- and discussing and discussing -- diversity, this was not the greatest look. Nor did it speak highly of organizers that the panel lost sound for a solid five minutes. Talk about disruption! OK, I'll stop here and go to another panel maybe. 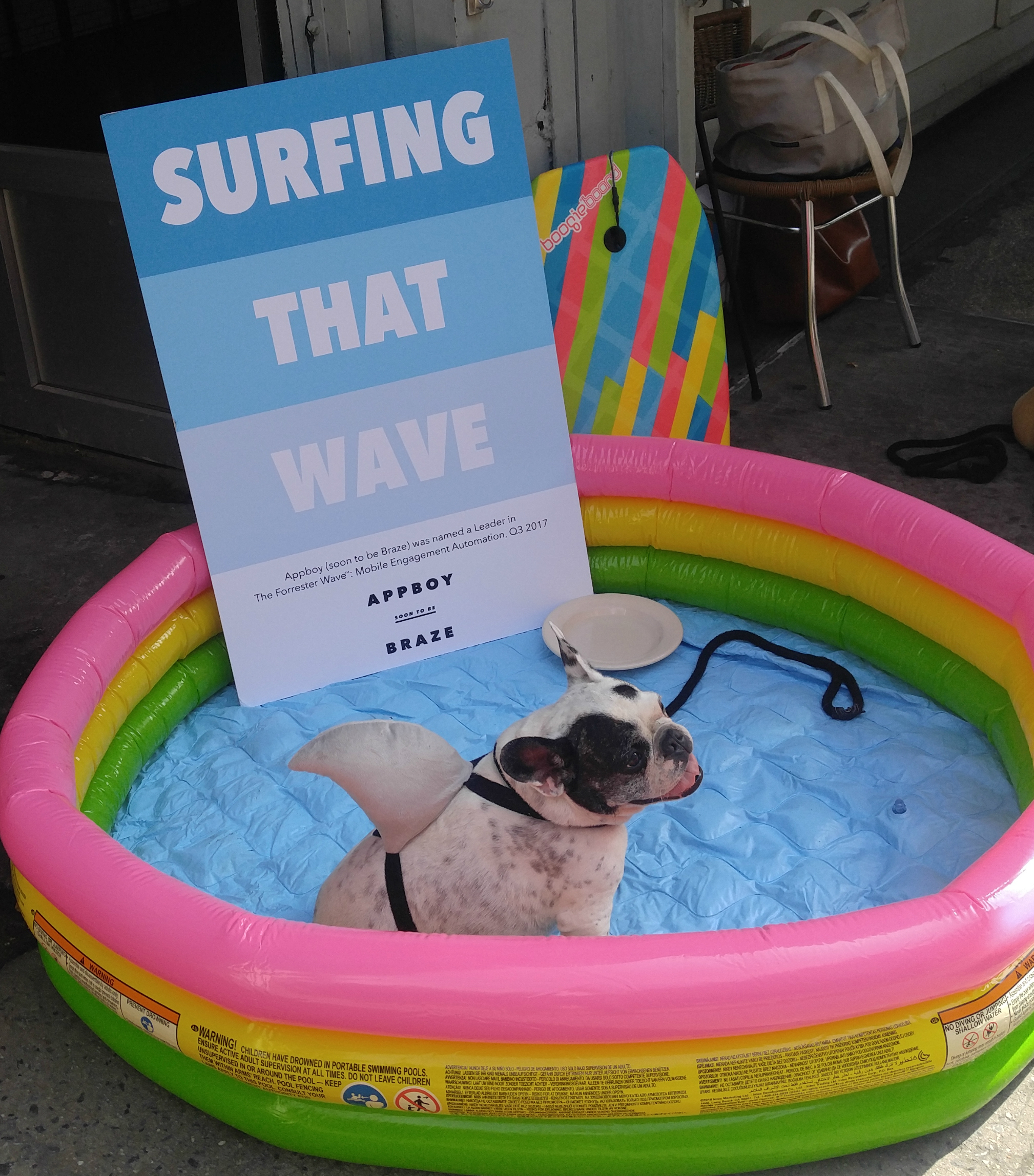 We're not sure what dogs with fins in a wading pool without water have to do with marketing, or for that matter with Appboy, "soon to be known as Braze." But we do know that you can never go wrong with dogs in marketing, including the marketing of marketing. So Appboy-Braze, has some winning experiential marketing going down just outside the Mobile Marketing Association's SM2 Innovation Summit, which is yet another sideshow to Advertising Week. It's in Greenwich Village, mercifully far from the main Times Square events. And the Braze dogs were attracting attention of passersby, including one with a pug of his own.

According to its website, Appboy-soon-to-be-Braze joins "data, technology, and teams together to deliver brilliant messaging experiences at every turn." And dogs with fins in dry wading pools.

Ad Age caught ColorComm Founder Lauren Wesley Wilson outside of the Girls' Lounge at Advertising Week and chatted about what she likes and dislikes about the week-long event. Her least favorite part is, shockingly, not the spotty Wi-Fi or long lines. Maybe we were just projecting.

Things have been a bit fraught between Google and marketers over such issues as brand safety and fraud refunds. But Unilever Chief Marketing and Communications Officer Keith Weed wanted to show a continued close relationship in his second Advertising Week appearance, this one alongside Google President-Americas Allan Thygesan.

"I talk about the industry publicly, but have my scraps privately," said Weed, breaking with his traditional sartorial flair as he sported a burgundy jacket for the second consecutive day. Weed reiterated his contention at Cannes that Unilever hadn't suffered the extent of brand-safety problems that other marketers had, in part because it used the "guardrails" Google had provided, but said he had worked with Google to help establish some of its added controls, such as letting videos accumulate more views before monetizing them.

Weed also claimed to have been coiner of the "grading your own homework" epithet now so widely used by others, such as WPP CEO Martin Sorrell. And he gave the industry on F on the subject of providing a common measurement standard across media. Thygesan believes there's a solution to that latter problem that involves Google Analytics, though he acknowledges privacy issues in sharing Google data across other platforms. And then, of course, there might also be that issue of Google grading its own homework.

Tweet
Share
7:00 a.m. ET
The best part of Advertising Week's first day had nothing to do with advertising

Last night, Advertising Week kicked off in earnest with its opening gala, a "VIP event of the Week at the Showplace of the Nation, iconic Radio City Music Hall." If you weren't invited then you clearly aren't, per the website, a "PLATINUM DELEGATE."

Dear reader, we were there for you. There was a speech, yes! We missed most of it, though, because it was a convenient time to slip on over to the bar. Mention was made of the origins of the Rockettes. And also of Advertising Week.

Regardless! There was a brass band and they were great. They entered, perfectly, with their cover of "Ffun" by Con Funk Shun (neither of which are typos). They segwayed into The Bar-Kays' "Soul Finger," shown here. Step. Touch. Repeat.

The good news about all of this: The funk always finds a way in.

Keep this page locked and loaded for updates throughout day two of Advertising Week. Here's what you missed yesterday.

What we're looking forward to today: PSFK discusses its "Future of Advertising" report at Anomaly's Soho offices in New York, Gen Z whisperers will explain why the Latest Generation doesn't care about your brand, Domino's will deliver their recipe for digital disruption, and more!