But Yahoo did kick off Advertising Week with an announcement that it was entering into a digital alliance with ABC News. In a live announcement outside in Times Square on Good Morning America, ABC's George Stephanopoulos provided some details of the agreement, including the launch of GoodMorningAmerica.com, which will be part of the Yahoo network. 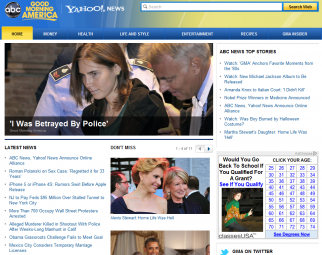 The deal gives ABCNews.com the reach of the still-giant Yahoo audience, while providing Yahoo with some broadcast star power and additional original newsgathering resources.

"We think we can revolutionize the ... digital news landscape," Mr. Levinsohn said at an indoor press conference following the outdoor festivities.

The group also announced the launch of three new, video series that will air online ahead of on the air. One series, called "Newsmakers," launches this afternoon with a Stephanopoulous interview of President Obama that will stream live on Yahoo and ABCNews.com. These series will be a collaboration between both companies, the executives said.

Mr. Levinsohn said that the deal "gives us an innovative way to go to market with traditional and digital advertisers."

He said Yahoo would utilize the strengths of ABC's sales teams in selling upfronts, but that sales units from both companies would work on monetizing content associated with the alliance. He refused to comment on financial terms of the deal, including any revenue-sharing agreements around advertisement.

For ABCNews.com, the deal marks an attempt to increase its online positioning, where it has struggled against its network competitors. It did not have many other choices for big-audience partners.

"There's no chance ABC News can do a deal with MSN and Google News is not playing any favorites," said Bernie Gershon, the former ABCNews.com GM who is now a digital strategist. "And AOL is dying, so doing a deal with Yahoo makes sense but it's also the last life vest on the titanic."

Mr. Gershon said the deal sounds in some ways similar to a content distribution deal he orchestrated in 2000 with Yahoo, which he called "lucrative for both parties." He said the collaboration lost steam because of debates over editorial independence.

The announcement comes amidst turbulent times at Yahoo. Carol Bartz, the embattled Yahoo CEO, was fired last month and rumors have been swirling of various bids to buy the 17-year-old company. A few days ago, Jack Ma, founder of Alibaba.com, of which Yahoo owns a stake, said at a conference that he was interested in purchasing Yahoo. Mr. Levinsohn refused to comment on possible acquirers or whether he was interested in the CEO position.

"Yahoo, despite all of their turmoil and the fact that they don't have a CEO, they are still a powerful driver of traffic domestically and internally," Mr. Gershon said. "That alone makes it a smart move for ABCNews."

Stephanopoulos was flanked this morning by Diane Sawyer, Barbara Walters, Katie Couric, among other on-air talent.