Revamped Omnicom Unit Has Turned Its Fortunes Around to Do Impressive Digital Work for McDonald's, Lipton
READ THIS NEXT
Enter Ad Age's A-List & Creativity Awards before the pricing goes up

HONG KONG (AdAge.com) -- In a remarkable turnaround, DDB Group China, one of the country's smallest and least-respected ad agencies only a few years ago, is now one of the hottest. Revenue at the shop grew 27% in 2010, and pre-tax profit was up 151%, said Dick van Motman, president-CEO for DDB Greater China.

"DDB bears little resemblance to the agency we used to know five years ago. It's now a truly integrated and digital-led offering, with scale and confidence," said Beijing-based Greg Paull, head of marketing consultancy R3. DDB Group China, which reports into DDB Greater China and is a division of Omnicom Group, includes agencies DDB, Tribal DDB and Rapp.

The Shanghai agency's clients include McDonald's Corp., Volkswagen, PepsiCo, Unilever, Philips and Huawei Technologies -- it even created the first brand campaign for the People's Republic of China to improve the country's overseas image. But 80% of DDB's clients are multinational marketers eager to expand in the mainland.

"China is a key market for Volkswagen," said Paul Hu, VW's head of brand marketing in China, who is based in Beijing. "We have a big product portfolio and need to position models for very different customer groups. DDB understand this."

In June 2010, DDB won a Gold Lion at the Cannes Lions Festival for the Green Pedestrian Crossing campaign for the China Environmental Protection Foundation -- only the second Gold Lion ever awarded to an agency in China. While that public-service campaign was a big winner at international festivals, the agency has earned praise for traditional advertisers, too.

Last summer, McDonald's wanted to win over Chinese consumers to its chicken wings, a tough challenge since rival KFC has nearly twice as many stores and is the market leader. Tribal DDB capitalized on the popularity of coupons to generate buzz for the fast-feeder. McDonald's pledged to honor coupons for chicken wings from any other restaurant toward discounted McDonald's wings via a social-media campaign that spread swiftly online. Three million videos were viewed, and McDonald's increased sales by 30%. "It was a controversial campaign," recalled Phyllis Cheung, McDonald's Shanghai-based chief marketing officer for China. "Tribal DDB are very brave about advocating things like this we should try." 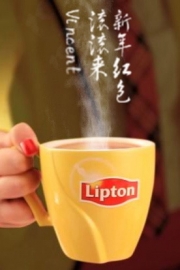 Lipton CNY 2010 campaign in China.
For Unilever's Lipton brand, DDB, along with AKQA, Shanghai, tapped into family celebrations leading up to the lunar new year with a digital campaign called "Cup of Greetings." Consumers sent online greetings that arrived as a steaming cup of Lipton milk tea that friends could blow on using a computer mouse. The steam formed a personalized greeting built around the Chinese character for steam, qi, which can be combined with other characters to create phrases related to good luck, prosperity and popularity.

In a sign of the agency's impressive transformation, major advertisers such as Pepsi are handing DDB extra business that goes beyond core global relationships. "The team is extremely attentive. Even top management pay particular attention to the details of our business," said Richard Lee, chief marketing officer for China in Shanghai. Five years ago, "Pepsi didn't work too much with DDB."

Back then, the mainland was booming, but with only 32 staffers, DDB Group China was not. Omnicom Chairman John Wren appointed Michael Birkin as the holding company's president-CEO, Asia/Pacific, with a do-or-die mandate to fix China. It was a daunting assignment. In 2005, Omnicom's most profitable operation there was PR agency Fleishman-Hillard. Among Omnicom's three ad agencies, TBWA was the biggest player, and DDB's reputation was in tatters.

Those moves paid off, and today the group has about 320 employees in China and 160 in Hong Kong. Staff turnover fell from 35% in 2009 to 18% last year, a very low figure in China where job-hopping is rampant.

Mr. van Motman's challenge for 2011 is finding people who understand branding and technology to help DDB cope with a shift in ad spending toward digital media. The group's three divisions operate through a single profit-and-loss line, a decision made early on by Mr. van Motman, who jokingly calls his management style a "guided democracy."

DDB accounts for half of the group's China revenue, followed by Tribal DDB with 30% and Rapp at about 17%. But Mr. van Motman predicts revenue from DDB and Tribal will reach parity within two years. "Online media is measurable and data-driven. Once clients wake up to that and realize what they want and know how they want to measure it, then digital will really explode."