In Its 10th year, Argentina Shop Finds the Secret to Its Success Is Simply Blending Sharp Creative With Perfect Strategy
READ THIS NEXT
Amp spotlight: A-List & Creativity Awards and Cannes Lions 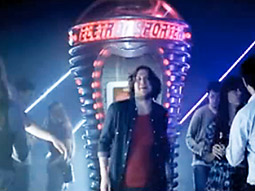 The agency's fiercely loyal clients embrace its offbeat but riveting ideas, such as a Teletransporter for local beer brand Andes and Cadbury's Chocolate Meter for measuring men. And years of experience doing international work for Procter & Gamble has given Del Campo the credentials to reel in multi-country assignments last year from Coca-Cola and Sony's PlayStation and Cyber-Shot digital-camera divisions.

"We're as creative as a hot shop but as strategic as a network," said Pablo Del Campo, the Buenos Aires-based agency's charismatic CEO. "We play both games."

Del Campo just celebrated its 10th anniversary with a bash that included the Latin American cast of the musical "Rent" re-enacting some of Del Campo's best commercials. ("It was like onstage advertising," Mr. Del Campo said.)

It was a far different story when his agency opened in 2000 amid an economic collapse that was devastating even for Argentina -- a country prone to economic and political upheaval -- that has shaped the company's philosophy. "We are survivors," Mr. Del Campo said. "We're scared about the future all the time. Life is unpredictable, and we're insecure about the future. So we always take advantage of the opportunities."

About 85% of Del Campo's revenue now comes from regional business, and the rest is from local work. The agency ended the year with a mountain of international creative awards, 15% revenue growth and a final big win: Coca-Cola moved its Argentina agency-of-record assignment and other Latin American business to Del Campo without a pitch, which will add about 20% to the agency's revenue in 2011.

In one of the most talked-about campaigns of the year, Del Campo invented for Anheuser-Busch Inbev's local beer brand Andes a booth called the Teletransporter that the agency lugged around to different bars in the city of Mendoza. Guys can enjoy an Andes beer or two with their friends after ducking into the Teletransporter booth and selecting the appropriate background that lets them call wives or girlfriends and pretend to be detained in some innocuous place that isn't a bar.

A talent for that kind of nontraditional marketing is exactly why the brewer hired Del Campo, said Ricardo Fernandez, general manager of Andes parent and InBev subsidiary Quilmes. "Del Campo knows how to interpret how media is evolving to generate relevant ideas for brands."

Teletransporter won a Grand Prix at the Cannes Lions Festival and, more important for Mr. Fernandez, bumped brand preference for an already dominant local brand Andes up another 10 points. He's also pleased that Del Campo quickly came up with a follow-up called Friend Recovery in which a guy can send a robot version of himself to the bar while he stays home in front of the computer experiencing a beer version of virtual reality.

Sebastian Scasso, Kraft Foods' category leader for Latin America, liked Del Campo's creative work and planning skills (still a rarity in Argentina) so much that he hired the agency without a pitch and hasn't looked back. He said, "You explain a brief and you don't just feel they understand what you want, but their eyes light up."

Mr. Scasso wanted to transform Cadbury chocolate from a product perceived as an English brand mostly bought at the airport duty-free shop to a more frequent treat for women, who tend to be more passionate about chocolate, but he didn't know how to reach them. "The insight was that sooner or later a man will disappoint you, but chocolate won't," he said. "And that led to: A man will never be as good as a whole Cadbury bar."

The resulting Chocolate Meter commercials -- each rating men's female-pleasing behavior in a relationship by awarding or taking away squares of a chocolate bar -- led to a 50% increase in Cadbury chocolate sales, and a 10% market share, Mr. Scasso said.

It all began with Procter & Gamble, and the brands that helped Del Campo develop the planning, creative and strategic thinking that other international clients now clamor for."The agency knows how to connect with the needs of the consumer in other countries and immerse itself in cultures as different as Mexico's to find relevant local insights," said Jorge Meszaros, VP-fabric care for Procter & Gamble Latin America.

As the regional agency for Ariel detergent (the non-U.S. version of Tide), Del Campo did a spot for Mexico's bicentennial celebration last year. More relevant for the brand than the bicentennial itself was the idea of getting ready for the celebration with impeccable clothes, especially in a country like Mexico that has more celebrations than anyone else, Mr. Del Campo said.

Mr. Meszaros also lauds the deep creative bench that includes executive creative directors Mariano Serkin and Maxi Itzkoff at an agency headed by Mr. Del Campo, one of the most renowned creatives in the Spanish-speaking world. "There's a very high level of creativity even three levels below Pablo," Mr. Meszaros said.

Watch: The biggest news and trends from the 2021 A-List & Creativity Awards

Gut trusts its intuition and works ‘at the speed of indie’