Carat Is Ad Age's 2014 Media Agency of the Year

Increased Revenue 20% and Reeled in Talent to Stay on Cutting Edge
READ THIS NEXT
Amp spotlight: A-List & Creativity Awards and Cannes Lions

Carat could have been forgiven if it was a little distracted last year.

The media arm of British conglomerate Aegis was in the thick of work for its massive General Motors account. It pivoted in numerous directions to get up and running on other new accounts and it moved in with the parents -- taking up office space at the headquarters of Japanese ad giant Dentsu following their big merger.

But Carat kept its focus, increasing revenue 20% in 2013 and reeling in new talent to stay on the cutting edge.

After winning so much business last year we could have gotten distracted by trying to absorb the business and being too internally focused," said Carat Global President Doug Ray. The goal was to avoid distraction by hiring and "scaling operations."

In 2013, Carat was a star on the new-business circuit, winning work from Macy's, Dannon, Staples, Burberry and adding more Sony business. Parent group Aegis even won the Reckitt Benckiser business.

It also attracted talent such as Robert Hannan, head of operations, and Mark Mylan, head of new business. Additionally, it grew its data and analytics group about 30% and restructured to put analytics, strategy and research capabilities under one department led by new chief strategy officer, Michael Epstein.

Clients say a collaborative culture is the secret to Carat's success; rather than trying to be a jack-of-all-trades, the agency knows when to lean on sibling shops within the Aegis network. Those resources include digital shop Isobar and out-of-home specialists at Posterscope. It's working more closely with Dentsu agencies like McGarryBowen and 360i, too. The result is a shop that tailors solutions for clients looking to break through the cluttered media landscape.

Their operating model allows us to be really agile," said Megan Stooke, director of global marketing at General Motors. "A great example is the ability to access a specialist brand like The Story Lab to help us with content strategy and creation." 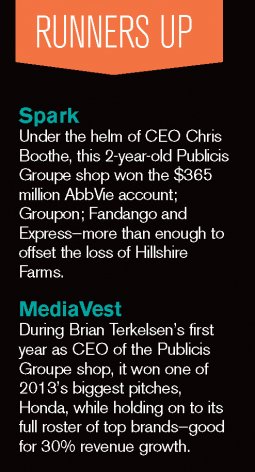 Despite numerous challenges, Carat's GM relationship is strong. The agency was brought aboard in 2012 by the automaker's polarizing former CMO Joel Ewanick and weathered the Facebook advertising storm, convincing the client to revisit the social network. "Our role is that of a strategic partner," said Mr. Ray. "Facebook is an important partner for GM."

Meanwhile, CCS, the shop's proprietary survey tool, is proving an invaluable resource for clients like Red Bull and Macy's. In late 2012, the shop created a YouTube channel to stream the energy-drink brand's Stratos stunt, in which Austrian skydiver Felix Baumgartner jumped from the edge of space to set a world record. Carat wanted to continue generating buzz for Red Bull through media. So in 2013, the agency used its CCS tool to help shape a media plan around the Rihanna's chart-topping song "Stay." For the two days following the single's live debut at the Grammy Awards, Red Bull owned the online video release of the track and capitalized on mass press coverage.

"Their proprietary study, CCS, has provided an invaluable level of consumer insight," said Macy's SVP of Media and Marketing Effectiveness Tony Giannini, in a statement. "We are stepping up support of digital channels, including audio, video, social, mobile and tablet based on research and future-forward initiatives Carat has brought to us."

Watch: The biggest news and trends from the 2021 A-List & Creativity Awards

We Believers wins over clients with extraordinary ideas and commitment

Burger King changes the world, one cow fart at a time