72andSunny Is No. 5 on the Ad Age Agency A-List | Ad Age
Skip to main content

72andSunny Is No. 5 on the Ad Age Agency A-List

It's not every day that an agency's work gets the attention of both the Vatican and the White House. 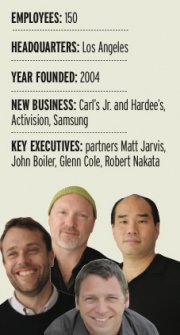 But it happened to 72andSunny in November, when client Benetton unveiled its arresting "Unhate" campaign featuring images of world leaders known for their tense relationships smooching passionately. Among them was Pope Benedict kissing a Muslim cleric and President Barack Obama locking lips with Venezula's Hugo Chavez.

As intended, the ads sparked debate, even outrage, among world leaders in Washington and Rome. They also reversed a trend of dwindling relevance for Benetton, which has built its brand on espousing ideals like peace and tolerance, and got people talking about the Italian retailer again.

"The most valuable thing you can do in marketing is get your clients and brands into a cultural conversation," said Matt Jarvis, partner and chief strategy officer at Los Angeles-based 72andSunny. "We're not the only people doing it, but I think we're particularly good at it."

Eric Hirshberg, CEO of video-game giant Activision, agreed. "They have a talent for doing work that is unignorable, and a stop-what-you-are-doing-and-shush-the-room quality to their creative," he said. The agency was behind the big-budget campaign for "Call of Duty Modern Warfare 3," with a live-action trailer starring actors Sam Worthington and Jonah Hill -- an unusual pairing designed to attract experienced gamers and novices alike.

Such work is proving that 72andSunny, founded in 2004 by a group of former Wieden & Kennedy executives, is just as creative as it was a few years ago, when it took home top honors for a Nike campaign at Ad Age 's first Small Agency Awards.

The 150-person shop, which MDC Partners bought in 2010, is also proving that being owned by a holding company doesn't mean you have to stop taking risks.

"That's a little bit of a fallacy," said Mr. Jarvis. "We're not going to stop being us and doing the types of things that have made us successful."

That's echoed by 72andSunny's first client, Madeleen Klaasen, chief marketing officer at Bugaboo. "The guiding principles for the brand they developed years ago are so relevant, and we still use them," she said. "They really built our global brand with us."

The agency's approach is far more democratic than that of most agencies, and an understanding prevails that a great idea can come from anywhere, not just the creative department.

"We're living in this modern era, where people move laterally and are good at a lot of different things," Mr. Jarvis said. "But as an industry we are remarkably siloed; we take these hybrid people and ask them to do one thing."

By contrast, his agency seeks out hybrid talent who are just great problem solvers and thinkers. "It's great for talented people, because talented people like to exercise all their muscles," Mr. Jarvis said.

People at 72andSunny "speak in an integrated and holistic way when they're presenting ideas, and the campaigns play that way when they're presented to consumers," Mr. Hirshberg said. "We've got the majority of business with them now, and it didn't start that way. When I first got there we gave them a small project, but they did a great job and earned everyone's trust."

In a similar manner, 72andSunny went from having a toehold in Carl's Jr. and Hardee's restaurants to getting the entire account late last year.

The agency ended 2011 with billings up 25% and 17% growth in gross revenue, a fifth of which it attributes to digital work.

The shop is "at that moment where they are ready to explode," Mr. Hirshberg said. "They have enough infrastructure and enough scale to compete, but they still have something to prove, and that 's a great place to be."