Edelman Is No. 8 on the Ad Age Agency A-List | Ad Age
Skip to main content
Sign In Register

Edelman Is No. 8 on the Ad Age Agency A-List

Celebrating a Year of Breakthroughs in Crisis PR, Digital and Social, Agency Giant Shows No Sign of Falling Anytime Soon
READ THIS NEXT
Enter Ad Age's A-List & Creativity Awards before the pricing goes up

Most established agencies endure peaks and valleys; some years are marked by a wave of account wins and others by losses and layoffs.

In that regard, Edelman remains an anomaly. Despite its massive size, the client-retention rate is second to none -- it lost only one top-50 retainer client in 2011, Burger King -- and its year-over-year growth and strong relationships can turn any shop, not just those in the PR space, green with envy. 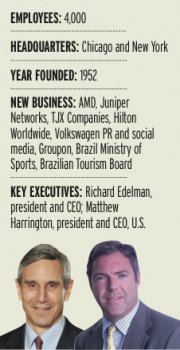 All that has the industry scratching its collective head, wondering when the giant will stumble.

Not anytime soon, judging by 2011 performance, which included new accounts such as Groupon and Volkswagen, and growth from existing ones such as Dove, SAP and PepsiCo.

That it counts work for edgy brands such as Trojan among its PR efforts and is increasingly trusted by tech darlings such as Groupon is a point of pride. It even briefly worked with Twitter last year, a sign that the agency, while a mainstay, isn't staid.

"We want to represent those kinds of companies because they drag us forward, so I believe that what we're learning on Groupon we can apply to GE," said the independent firm's CEO, Richard Edelman.

Brands have long turned to Edelman for its consumer PR prowess, but it's slowly earning its stripes in the lucrative crisis-PR field. When Edelman got the call to handle communications surrounding a crisis threatening to topple one of the world's largest media organizations -- the hacking allegations aimed at News Corp.-- more than a few eyebrows were raised.

Last year was also a breakthrough in the digital and social spaces. Digital billings now account for almost 15% of Edelman's revenue in the U.S.; that practice grew more than any other, at 28.3%.

Mr. Edelman said in 2011 the firm reaped the fruits of getting its digital infrastructure in place. "We're designing and building more than social," he said. "We created a new ecosystem for how we operate. We get it now."

That assertion has been validated by its competitive set. It won the Volkswagen social-media account after pitching against digital and social-media firms.

Gary Sheffer, GE's head of communications, lauded the agency's work to create a digestible microsite and infographics that leveraged GE data, positioning the company as a leader in air traffic and aviation.

"They helped us cross-pollinate thinking across consumer, corporate and public affairs," said Mr. Sheffer. Through its growing research capabilities, Edelman helped GE think about "some of the challenges we face this year around issues management, such as the nuclear industry related to Japan and the political situation in the U.S," he added.

Everywhere-at-once Edelman was even behind the PR push for Starbucks' rebrand. Corey Dubrowa, Starbucks' senior VP-global communications, said the firm was aware of the critical environment in which the new logo would appear -- Gap, for example, had gotten skewered for its logo refresh just months before. "So," Mr. Dubrowa said, "one of the key conversations with Edelman early in the process was around using the digital tools we have at our advantage to tell the business story and [provide] the context behind the business rationale."

Mr. Dubrowa credits Edelman with giving Starbucks the confidence to roll out the campaign on a global scale.

The agency supported the brand's recent launch in India, which led to 150 hires in the country and a boost in market share in Asia. Edelman has seen double-digit growth in BRIC economies such as China, where Regional President Mark Hass has doubled business in two years with clients such as HP and Starbucks.