With Populations in Every Demographic Online, Marketers Are Using Data Scaling and Geotargeting to Get to Those Hard-to-Reach Audiences
READ THIS NEXT
How restaurant chains are duking it out to be the best in their categories

It's hard for marketers to reach Dale. After the planting and harvesting on his Montana wheat farm comes the hauling to market -- 60 to 70 trips into town, at 900 bushels a trip.

His farm in Teton County is so remote that it gets postal service just three times a week, so circulars don't have the same impact.

"I don't get the Sunday paper until Monday, and it always sucks when Monday is a holiday," Dale said. "Then I'll get Sunday's, Monday's and Tuesday's paper on Tuesday."

But brands have a new way to reach Dale, who's sure to check Facebook a couple of times a day. 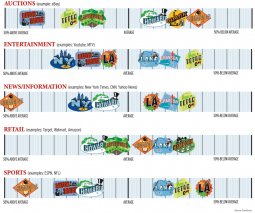 Which types of websites are most popular
in the areas Ad Age is tracking.
Pin It

Time spent online varies widely by location, according to an exclusive set of data provided by ComScore for the American Consumer Project.

People in large urban areas such as Manhattan (Patchwork Nation's Industrial Metropolis and Esri's Solo Acts segments) can spend 30% more time online than those in rural areas such as Teton County (Tractor Country/Factories and Farms). People with farm or factory jobs aren't sitting at a computer eight hours a day, and they probably don't have great cellular coverage.

The ComScore data also reinforce what common sense tells us: High-income suburbs such as Howard County, Md., (Monied "Burbs/High Society) overindex on time spent online and on most categories of sites we reviewed. They are voracious consumers of both traditional and digital media, from the printed page to their iPads. They're prototypical multiscreen households.

Facebook is the great equalizer. The index values show only a few points of variation, making it the most evenly used site of more than 2,000 tracked in the ComScore data.

"We're at a point where the [social-media] market is pretty mature," said Andrew Lipsman, VP-industry analysis at ComScore. In just a handful of years, social media -- and Facebook in particular -- has grown to track with search in its ubiquity among all demographics.

In October alone, Americans spent 136,000 cumulative years on Facebook. Each of the 11 households we're tracking use Facebook, most of them daily.

Basha, a 75-year-old computer-phobic empty nester with an AOL.com email address, uses the social-networking site to check in on her grandkids. Michael, an affluent African-American in New York County (Manhattan), is the only one without his own Facebook page, but his "friends" have connected through his partner's account. Michael checks it more than his partner does.

It's logical, then, that marketers are using Facebook to reach both broad and extremely targeted audiences.

When the Communications Workers of America wanted to get its message in front of Congress, it worked with Blue State Digital to use publicly available information to target policymakers' profiles. It's not hard to do. Targeting has gotten that good.

"Five years ago the walled gardens were the richest sources of information," said Theresa LaMontagne, managing director-analytics and insight at MEC. "Now data is scaling so much that you are able to do it outside."

Whether it's the Zappos ad that follows people around the web because of a product they recently searched for or the Groupon banner that calls out a viewer's hometown, ads targeting consumer behavior and geography are gaining prominence.

"We try to mix network-type buying that has a geographic filter on top of it," said Blue State Digital's Media Director John Simpson. "That's going to allow us to get scale with a certain geography."

There's a sweet spot between these targeting types. The American Consumer Project is looking at each U.S. county through two lenses: Esri's Tapestry framework and the Patchwork Nation. The combination, geography tied to characteristics such as economic and demographic profiles, is proving predictive and illustrative.

For instance, counties like Teton can be found throughout the U.S. They tend to underindex on real-estate sites, which makes sense with so little resident turnover in these areas. But they overindex on many commerce-driven categories, including auctions, retail and automotive.

Dale is always checking auction sites for deals on farm equipment and spare parts. Over the holidays a friend with Amazon Prime talked him into making his first purchase -- a percolator coffee pot -- on the site. He's not hooked, partly because he perceives it would be a hassle to return anything.

Geotargeting has made reaching these areas much simpler. Ms. LaMontagne said that planners can bypass local media websites, which are often thin on content, for mainstream sites such as Yahoo and AOL.

The ComScore data have also uncovered interesting correlations. Areas that index high on The New York Times sites don't tend to shop at Hot Topic. FoxNews.com readers visit Forever21.com and underindex on Amazon and Abercrombie & Fitch. Overtargeting has its dangers, of course, as most marketers aren't interested in reaching an audience of one.