ANA CEO: 'Marketers Must Take Their Industry Back' 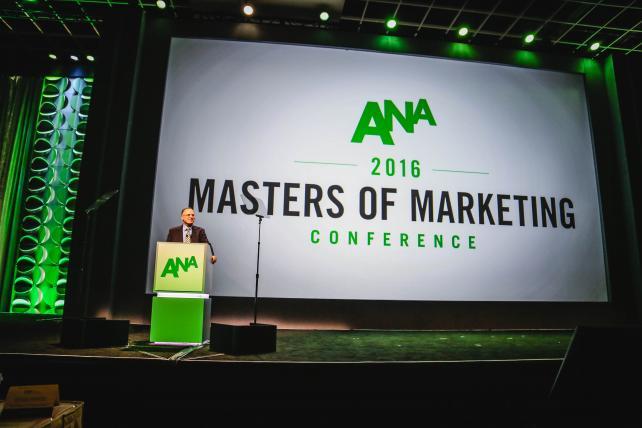 Marketing executives have lost control over their own industry, and chief marketing officers must take a greater role in solving problems such as ad fraud, viewability, transparency and a strained and undertrained workforce, the leader of the Association of National Advertisers said Thursday.

"What we have must change. Our current situation is undesirable, unproductive and unsustainable," ANA CEO Bob Liodice said as he kicked off the association's annual Masters of Marketing Conference in Orlando, Fla. "It is time for marketers to lead," he told the audience of 2,700 industry leaders, including 1,500 ANA members. Marketers "command the marketing decision-making process but they are not sufficiently engaged or leading the industry's agenda. It's abundantly clear: Marketers must take their industry back."

"CMOs can no longer let others do the heavy lifting," he said. "If they want something, they have to lead the way."

In that spirit, he unveiled a new leadership alliance called the "ANA Masters Circle." Membership is open to all CMOs, whether or not they are ANA members. The program has a broad agenda with four main objectives:

Media: The group will "lead the way in an industry-wide call for a strong, transparent and highly productive media supply chain that is free from fraud, is highly viewable, can be measured and accredited, and has data and analytics at its core," according to an ANA statement. This includes taking leadership roles in existing programs including the Trustworthy Accountability Group, known as TAG.

Responsible Marketing: This includes tackling issues such as gender equality, multicultural marketing and diversity, as well as "efforts designed to protect the wellbeing of children such as The Partnership for Drug-Free Kids."

Regulation: The Circle will support self-regulation efforts and "push back against overreach from the Federal Communications Commission and Federal Trade Commission."

Talent: This includes development of a diverse talent base, as well as urging "all CMOs to aggressively upgrade the training and development of their own staffs, particularly in the area of digital communications and technological advancements."

Mr. Liodice did not outline exactly how the new program will operate. But the move seems to be an attempt to spur greater involvement from CMOs in pushing the ANA's agenda. That agenda has become increasingly aggressive under Mr. Liodice's relationship.

For instance, the ANA has been embroiled in a year-long fight with the ad agency's leading trade group, the 4As, over transparency issues, including alleged media rebates. The ANA issued transparency guidelines earlier this year in the wake of an investigation it oversaw to examine allegations that agencies were collecting rebates from U.S. media-buying deals. The 4As has instead pushed its own guidelines for maintaining transparent agency-client relationships.

Mr. Liodice did not mention the dispute during his presentation. Instead, he spent much of his presentation outlining a litany of issues affecting the industry. "There are legitimate systemic concerns that permeate the marketing business model," he said, including a talent pool that is "overworked and undertrained."

Addressing measurement challenges, he critiqued a "lack of common currency" and "marketing mix models that are not up to date." On privacy issues, he said: "Our industry has the FCC and FTC as well as public policy groups hovering over us. They demand changes to the way we do business and threaten our industry with consequences of stiff regulation."

"And of course we could speak for eternity to address the consistent and resource-draining challenges of fraud, ad blocking, viewability and transparency," he said.