Ten Most Important Mobile Moments of the Year

Foursquare partnered with AmEx; Shopkick went with the CW. Location-based companies proved great at raising capital but not so great at getting a mass of consumers to check in to locations on an ongoing basis. Two of the leading players wisely evolved their strategy. AmEx now rewards Foursquare check-ins at participating merchants with Rewards Points, a more appealing prospect than being the mayor of a coffee shop. Shopkick, which initially required users to turn on the app when entering a store to get points toward merchandise, now rewards people for pointing their phone at the screen while watching TV ads from participating merchants. Consumers can wallow in the smartphone-driven plots of "Gossip Girl" and get points for focusing on the ads.

According to mobile ad network Millennial, Android drove the biggest volume of ad impressions in mobile media in January. By October, 56% of all ad impressions running through its system came from Android devices, compared with 28% from Apple devices. Just a year before, the two were neck-and-neck. It all proves that open systems, great prices and broad availability can flip the tables on an established leader.

An Apple Device Gets Metered

Even closed systems sometimes open doors, at least in mobile. In January, Nielsen began metering smartphone activity on iOS platforms. We now know just how often people access weather and play "Angry Birds" -- and we hope the industry will stop using downloads as a measure of consumer engagement.

QR codes are too often ill-conceived and badly promoted, delivering a less-than-optimal first-time experience. Macy's put the codes front and center for its spring and fall "Backstage Pass" promotions and did something fun with the codes: Get a coupon, get style tips, watch someone like Martha Stewart do a demo, or let Jessica Simpson show you how to work a pair of skinny jeans. Macy's planned the promo so well that it included in-store WiFi to ensure that the codes would work.

Considering the gorgeous, high-res palette offered by iPads, the ads are coming up distinctly short. My kid loves The New York Times iPad app, especially the science and auto sections, but even he notices the lack of ads. Wired kind of gets it with its app, but even then most of the ads are clickable static images. The Westin ad that arrived with the relaunch of the Weather Channel app in September actually exploits the fact that you interact with the content by swiping. If your weather forecast says snow, the screen becomes covered in snow that you can wipe away to reveal a warm getaway destination. Bring on more iPad ads that fit the content and involve some kind of aesthetics. 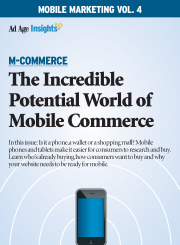 Ad Age Insights' Mobile Marketing quarterly series explores how location-based services and couponing can enhance mobile marketing, how to use the metrics currently available to figure out a mobile strategy and best strategies for mobile commerce. Buy the series, or just one of the issues, at AdAge.com/whitepapers.

Though people in New York and San Francisco may not believe it, not everyone wanted to pay a data-service fee to go online from their phones. But by midyear, ComScore was reporting that more smartphones than standard had been sold. How app-tastic.

Every quarter, I check ComScore's nice pie chart, which has a grandma slice of "just talkers." By August, the piece was down to 25%, and using the phone for mobile media (apps plus the web) had blown past 50%.

Starbucks may be the gateway drug for getting Americans hooked on the idea of using their phones instead of a debit or credit card for purchases. In June, Starbucks went national with its app, which hooks into its loyalty program and allows scan-and-pay. It falls short of Google's ambitions for a mobile wallet, enabled by near field communications, but still increases line speed for that mochachino.

In October, eMarketer revised mobile-device ad spending estimates upward, to $1.23 billion. It's a drop in the ocean compared with the $31 billion projected for online-ad spending but still a significant milestone.

PayPal Mobile announced a 511% increase in global mobile-payment volume from Thanksgiving 2010 -- the peak payment period in the U.S. was 3 p.m. to 4 p.m. ET -- just after the pie was served.