Burnett Shop Picks up Hardware at Cannes in Radio Category
READ THIS NEXT
Salesforce’s Stan Sugarman on driving business values, breaking down silos and hiring for attitude

The radio spot mimics the sound of battle by choosing the names of food that can be pronounced or chanted to suggest soldiers marching, artillery fire and aircraft taking off, and ends with the tagline "For the cleaning battle in the kitchen, choose Bounty."

Lapiz created the spot in Spanish and English versions, to run on Spanish-language and bilingual radio stations.* The English-language spot starts with the words "jam, jam, jam, jam" chanted to sound like marching feet. The word "pizza" whizzes by like a missile, and there is the "rat-a-tat-tat" of ratatouille and the whining sound of aircraft taking off for wine.

"The strategy is Bounty is a strong towel," said Laurence Klinger, exec VP-chief creative officer of Chicago-based Lapiz. "The strategy is the same for TV and print, but this kind of execution is made for radio. It uses peoples' imagination and uses battle sounds, but they're the sounds of food." 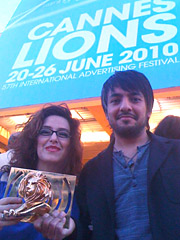 Maria Bernal and Jose 'Pepe' Funegra with their Gold Lion.
Mr. Klinger said the two associate creative directors behind "Battle," Maria Bernal and Jose Funegra, spent a week in Buenos Aires producing the Spanish-language spot, recording lots of different words to see how they sounded. In the Spanish-language version, "flan" substitutes for "jam" as the marching feet. Then the same thing was done in Chicago, where hundreds of words were tried out for the English-language version. Ms. Bernal said that a few food names worked in both languages, such as "pizza" and "ketchup," which represented the sound of loading a gun.

Ms. Bernal and Mr. Funegra had just several hours' notice to hop on a plane in Chicago and fly to France to collect their Gold Lions at the Cannes award show. The same spot was awarded two Lions because it was a winner in both the sound design and the household categories of the radio contest. Ms. Bernal said Lapiz entered the English-language version to give "Battle" a better chance of winning with an international jury.

So far Lapiz is the only Lion winner from the U.S. Hispanic market, although LatinWorks, Austin, Texas, has three spots on the TV shortlist for Cine Las Americas. The spots for Austin's Latin American film festival continue with a new twist on last year's award-winning theme of reproducing crazy but true things said by Latin American leaders to deliver the message that, if that's reality in Latin America, just imagine what the cinema is like.

~ ~ ~
CORRECTION: An earlier version of this story incorrectly stated the spots appeared in the Hispanic and general market.