'Replay' Is the Top Campaign of the Promo and PR Categories
READ THIS NEXT
Zoom juries, digital networking, and 'deep dives' into the work: Lions Chair Philip Thomas on what to expect at virtual Cannes

CANNES, France (AdAge.com) -- As predicted, the first two awards handed out at the 57th annual Cannes Lions International Advertising Festival today set the stage for Omnicom Group's TBWA/Chiat/Day, Los Angeles, to be a big winner in 2010. "Replay," a campaign for PepsiCo's Gatorade brand, netted not one but two Grand Prix trophies in the promo and PR categories. 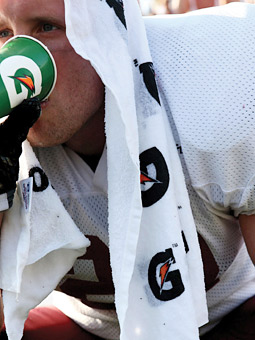 Gatorade wants to be at the point of sweat.

WHAT IT IS: "Replay" saw Gatorade and TBWA reunite two high-school football team rivals 15 years later. The agency followed players for four months leading up to the game, with documentary episodes appearing online and the game airing on Fox Sports Net.

WHY IT WON: Using descriptors such as "authentic," "real," "true" and "not contrived," the judges seemed to like that "Replay" created a lasting conversation around a big brand idea for Gatorade rather than being a one-off execution.

CONTROVERSY OR CLEAR WINNER? There appeared to be little disagreement among members of the juries in deciding the Grand Prix winner. While the PR jury's decision was not unanimous, "Replay" carried a "very strong majority" of votes, Mr. Taaffe said.

TOTAL NUMBER OF LIONS AWARDED: 55 for promotion and activation; 44 for PR. "Replay" was the single Grand Prix winner in the promo and PR categories. Though TBWA was responsible for both, Paragon Marketing Group pitched in for the promo win. The promo category gave out eight Gold Lions, 20 Silver Lions and 26 Bronze Lions. The 2-year-old PR category saw a 32% increase in the number of entries this year, and as a result the festival decided to give out Gold and Silver Lions for the first time. In addition to the Grand Prix, 11 Gold Lions and 32 Silver Lions were awarded. "We tend to allow the category to grow before we expand the metal," festival CEO Philip Thomas remarked during the press conference, suggesting perhaps next year Bronze Lions will be doled out too.

WHO ELSE DID WELL? Other campaigns that performed well on the first day of awards included BBDO, New York's work for HBO, which historically has done well at Cannes and once again netted several Lions in the promo category, as well as a Heineken beer campaign by JWT Italia in Milan that took home a gaggle of promo and PR trophies. The PR jury joked that winners in the category were a "little bit like the World Cup ... the small countries are giving the larger countries a run for their money." Entrants from Spain, Sydney, Sao Paulo and Sweden did particularly well. One campaign out of Brazil referred to as "pee in the shower" -- promoting urinating while in the shower to save water -- was one of the most compelling entries. It made the shortlist, but ultimately won no Lions because the judges were unable to determine the effectiveness of the work -- and thank goodness for that.

WHAT THEY DIDN'T LIKE: The entry that most antagonized the PR jury was one in which the agency and client stated that "we had no money, so we turned to PR." (Despite the best efforts of the press, the jurors wouldn't reveal who was responsible.)

LOOKING TO NEXT YEAR: Judges predicted that traditional PR firms will fight back next year against advertising agencies that are entering and prevailing in the PR category. Still, they seem to now favor earned media that is spread via peer-to-peer sharing rather than paid advertisements that are then promoted ("Replay" was also a winner earlier this year in the International Andy Awards' new earned media category).