For the second year in a row, an ad agency -- not a PR shop -- took home the Grand Prix for PR at the Cannes Lions International Festival of Creativity as Clemenger BBDO Melbourne won for its "Break Up" campaign for National Australia Bank. 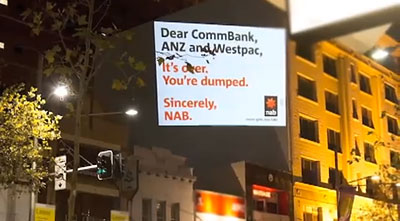 What it is : National Australia Bank is one of Australia's four big consumer banks and it wanted to differentiate itself from the other three, as big banking had gotten a bad rap in the recent economic meltdown. So it staged a public "break up" with the other three through a 24-hour PR blitz. The blitz actually kicked off a few days early with a tweet meant to look accidental, suggesting that NAB was "stressed" and weighing an important decision.

Why it won: This campaign did superb job of positioning its concept as a bank while de-positioning its competition, said Mr. Senay. He also praised the sophisticated use of Twitter to launch the product, playing on the often inadvertently embarrassing and accidental nature of that social-media channel. "The first reaction of that tweet by the competition was 'Oh goody,' Mr. Senay said. "It happened on a Friday and percolated over the weekend, then on Monday came this huge offensive move to declare a breakup. 'Dear other banks, I'm very sorry to tell you we are going to break up.'"

He described the campaign as "sort of like a conceptual jujitsu. Take the power of the competition and use it against them." The jury also appreciated the integrated aspect of the campaign, which involved paid media, earned media, shared media and owned media.

Controversy or clear winner? Not so clear cut -- it took two rounds of voting to settle the Grand Prix winner. Adding to potential controversy, this is the second year in a row that a traditional full-service ad agency won the PR Grand Prix -- last year TBWA won for Gatorade's "Replay." When asked about that two-year trend, Mr. Senay said the jury went into the competition with the belief that "excellence and creativity in public relations doesn't have an address. We're in an era where the labels matter less and less." Still, he said, this may serve as a wake-up call to the PR industry. "There's a certain amount of isolationism in our industry," he said and the winners will be the ones, no matter what their label, who "reach across the disciplines and grasp hands."

Total number of Lions awarded: Of the 819 entries -- up more than 40% from last year -- 39 were awarded Lions. This is the third year Cannes has offered the PR Lion.

Who else did well: Several other campaigns were praised during the press conference. Christopher Graves, CEO of Ogilvy Public Relations, praised work that had distinctive results, such as "Shine a Light on Opportunity" for Durand Academy by Political Lobbying & Media Relations (PLMR), London.

Richard Millar, CEO of Hill & Knowlton, London, praised ideas rooted in a brand story or truth, such as Gold Lion winner "Tram a Benz" from Jung von Matt, Hamburg, Germany. The client was Mercedes-Benz and the agency organized a campaign in which a man hitchhiked across Europe by only getting into Mercedes-Benz vehicles and telling the stories of their drivers. "It supported the brand proposition of 'the best or nothing,'" Mr. Millar said.

And Karl-Heinz Heuser, CEO of Burson-Marsteller, Frankfurt, Germany, talked of a strong crisis-communication entry, "The New Voice of Aflac Duck" from Kaplan Thaler Group, which won a Bronze. "We had discussions of whether crisis could be solved by a piece of humor and ultimately we decided, yes," he said. "Maybe something we've learned from the advertising industry."

What they didn't like: "We saw far too many entries that begin and end in the results section with publicity and ad value, as if that was it," Mr. Senay told the media during the press conference this morning. "That's the lowest-common denominator among all awards here." He then unfolded a giant piece of paper on which the jury had drawn a pyramid. At the top was behavior change, which he said was the most important effect of a campaign. In the middle were attitude and belief change through some form of engagement. At the bottom were the words awareness and publicity, which were important, but can't be the ultimate end goal. "I'd like to see more of [behavior change], in terms of bottom line of results," Mr. Senay said.

Looking to next year: Watch for more entries from corporate categories, after a plea from the jury. "Entries from corporate categories, which are the bread and butter of many PR firms, were weak," Mr. Senay said. "Public affairs, crisis issues ... I know there's better work out there, I've seen it in other competitions, regional competitions, but you have to enter to win."