Burger King May Be Cannes' Wackiest Marketer of the Year Yet

Burger King will be honored as the Cannes ad festival's Creative Marketer of the Year this week on the strength of that took a lot of risks -- and, sometimes, bizarre turns.

Flame-Grilled Restaurants
Seems Burger King's grills may have worked a little too well in these ads from David. They showcase photos of BK restaurants in Italy, Oregon and Pennsylvania that, in real life, went up in flames -- with the tagline "Flame grilled since 1954." 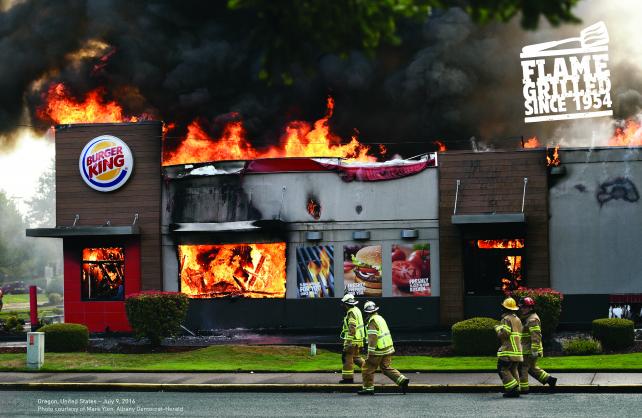 Los Parillas
In Argentina, people with the surname Parrilla have it tough. The word translates as "grill," so those with the moniker suffer taunts like "This wiener is for your grill" or "Take care of my meat." Burger King, along with agency David, showed empathy for the Parrillas of the world with a campaign that tried to make up for their suffering -- with free Whoppers for life.

Adult Meals
Because grown-ups need their fun too, BK and Leo Burnett Israel created a special meal for them. The Valentine's Day promotion was available only after 6 p.m. to folks 18 and over. It came with grub and an adult toy.

Burger Clan
Because gamers can hardly be bothered to pause for a pee, much less to pick up a phone, Burger King Spain teamed with Sony PlayStation on a service that let players order Whoppers or Chicken Fries from inside their game. The "Burger Clan" activation from Lola MullenLowe sneaked pro gamers into online games, where they helped amateur players complete their missions and took their BK orders too. The food would then arrive via the restaurant's real-world delivery service, Burger King en Casa. According to the agency, the program led to 1,200 new registered home-delivery users, and it's now rolling out in Germany, Italy and Austria.

Crackling Christmas Jumper
And just when you thought the ugly Christmas sweater couldn't get any uglier, Burger King, Buzzman Paris and apparel company Rad.co introduced a wondrous creation: a jumper with a fireplace that lights up with "flames" from your smartphone screen. (Samsung was not a co-sponsor.)