Although the Cannes advertising festival was already in full swing by the time Sterling Draper Cooper Pryce opened its doors back in the 1960s, we've yet to see the boys from our favorite fictional ad agency sipping rose on the Carlton Terrace or leering at the leopard skin-clad mother-daughter prostitute combo. So, until the new Jaguar ad gets nominated for a Lion, we'll have to settle for an actual visit from Jon Hamm, who swung by an intimate cocktail party that New York agency McGarryBowen held on the roof of the JW Marriott here. 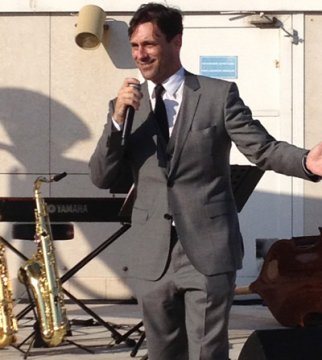 Despite a blazing Mediterranean sun and the heavy breathing of a few dozen ad folk (and Ad Age reporters) lining up to meet him, Mr. Hamm was natty -- and curiously unsweaty -- in a three-piece gray suit that could have been pulled from the "Mad Men" wardrobe closets.

It was his first trip to Cannes for the ad festival; he's been to the film festival, naturally. He shook hands. He posed for pictures. He sipped on Budweisers. He even talked a little shop, making some remarks after an introduction by the agency's co-founder, Gordon Bowen. Mr. Hamm, who will begin shooting the show's sixth season in a few months, explained some of the key differences between him and his character, Don Draper, noting that unlike Draper, he is not a philanderer and has been in a very long relationship (with actress Jennifer Westfeldt). He joked that , at most, he is a semi-alcoholic. He often has to remind people that he is not really an ad executive but only plays one on TV, but he does feel like he's absorbed a bit of Madison Avenue thanks to role.

Mr. Hamm was enormously affable, observing that there are worse things than being the center of attention on a beautiful evening in the South of France.