Google won a second Grand Prix on Tuesday, sweeping the media Lions contest with a Google Voice Search campaign whose medium for the high-tech service was the very low-tech billboard in the U.K. The top media winner at the Cannes Lions International Festival of Creativity was created by Manning Gottlieb OMD in London. 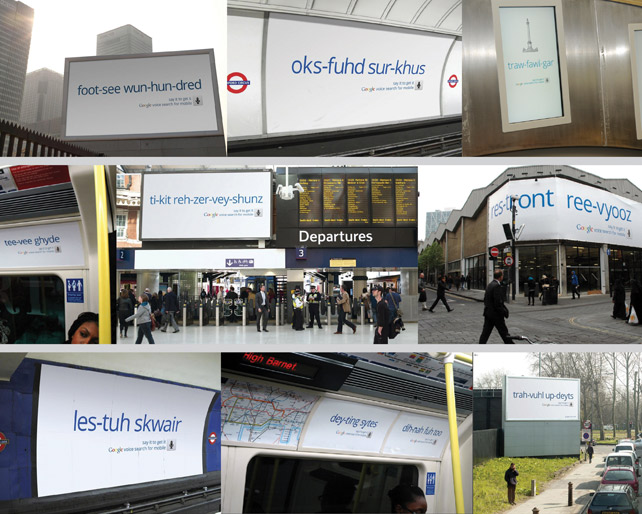 WHAT IT IS: Google wanted to change consumers' behavior, and inject some wit and romance in a Google service that could feel cold and distant. The solution: hyper-relevant context. Google identified London landmarks, and placed relevant billboards nearby in a total of 150 different creative executions around the city. For example, a billboard that said "Sherlock Holmes" was placed near Baker Street . Because the service is voice search, the words were written phonetically, drawing further attention. Voice search in London more than doubled.

WHY IT WON: Jury President Mainardo de Nardis, CEO of OMD Worldwide, described this year's mantra for the Grand Prix as "the three fundamentals of our industry: technology, analytics and storytelling."

"One thing we all particularly liked [about the Google entry] was technology driving targeting driving briefing and strategy and eventually creative," he said. "That's the reverse order from what one usually sees and I found that fascinating."

The work appealed to judges on several levels. Steven Piluso, exec VP-chief strategy officer of PHD in the U.S., said that many entries this year relied on social media measures such as shares, likes and tweets and were "not necessarily correlated to business results. Google had real tangible business results ... and it was delightful."

Another judge, Gabi Attal, CEO of ZenithOptimedia in Israel, felt Google was sending a strong message by using a very traditional medium. "It's great that Google is using old media to advertise," he said. "Everyone talked about digital, online, startups [in their entries], and Google used outdoor to get their message to the target audience."

THE JURY: Thirty-one judges judged more than 3,000 case studies over six days, including "one that was memorable because it was 17-and-a-half hours; we didn't set out to break the [festival] record," Mr. de Nardis said.

Of the 12 Gold Lions awarded, about half were public service or charity ads, which aren't eligible for the Grand Prix. The jury watched the remaining five Golds again, and each judge voted for his favorite. That narrowed the choices for Grand Prix to two, and in the second and final round the vote was split 60-40 in favor of Google. The close contender was an offbeat Belgian campaign by Antwerp agency Dallas for obscure local radio station Joe FM called "The National Surprise Party," in which the entire country conspired to throw a surprise birthday party for one unwitting citizen. The man's wife, who was in on the plot, dragged him off to a remote spot in Egypt with no internet or cellphone service for a week's vacation while radio, TV, outdoor and online messages invited all of Belgium to help throw him a surprise birthday party. Returning to Belgium, he was driven from the airport to the gigantic party, still blissfully unaware he had become a celebrity.

HOT TOPIC AT PRESS CONFERENCE: Two debates of previous years -- over the media jury not having enough time to thoughtfully judge all the entries and the dominance of creative shops over media agencies in the media category -- were muted. The festival had added a sixth day to the previously five-day judging process -- although that didn't stop them from working 17-and-a-half straight hours to finalize the shortlist. And a media agency, after all, won the Grand Prix.

TOTAL NUMBER OF LIONS AWARDED: Out of 3,247 entries, the media jury gave out 107 Lions, including the Grand Prix and 12 Golds (counting the Grand Prix, which is also a Gold), 28 Silver Lions and 67 Bronze Lions.

WHO ELSE DID WELL: Belgium! Mr. de Nardis commented that a remarkable 3 of the 12 Gold Lions came from tiny Belgium. In addition to the "National Surprise Party," another Antwerp shop, Duval Guillaume Modem, won Gold awards for Carlsberg beer and Turner Broadcasting System. That's three times as many Gold Lions as the U.S. won, with a single Gold, for Mediacom New York and Canon USA's digital SLR cameras.

WHAT THEY DIDN'T LIKE: Given the large number of Gold Lions for charity and public service campaigns, some judges complained about the festival's prohibition on such ads winning a Grand Prix.

LOOKING TO NEXT YEAR: "Some great ones were disqualified," said Sunni Boot, a judge and CEO of ZenithOptimedia in Canada. "I'd argue for next year [that rule] should be cast aside."