Barbarian Group's Open-Source Platform Wins Lion in the Ad Fest's Newest Category
READ THIS NEXT
Zoom juries, digital networking, and 'deep dives' into the work: Lions Chair Philip Thomas on what to expect at virtual Cannes

The Cannes Lions International Festival of Creativity on Tuesday awarded its first Grand Prix in the innovation category, which was just introduced this year. The category was created to honor pioneering forms of technology that have made ideas possible, and the top prize was awarded to Cinder, a software developed by Cheil-owned digital agency The Barbarian Group.

What it is: "Cinder" is an open-source platform for creative coding. It's free to use, and so is the recipe that makes it. Created for "hardcore developers," it runs on Mac OS X, the iOS and Windows, and was originally created to serve the VFX industry. It is a "toolbox" that lets you program graphics, audio, video, networking, image processing and computation geometry.

See more from the International Festival of Creativity.

The jury: The jury was chaired by David Droga, founder and chairman of Droga5. He said that the group of jurors, who represented a broad cross-section of the industry, understood "what's at stake when you introduce a new category, especially when it's something as broad as the innovation Lions." Mr. Droga also added that the category had created a "new format of judging." It required shortlisted entrants to make an in-person presentation in front of a live audience, which included the jury, earlier this week. That made the process more genuine, said jury member Emad Tahtouh, director-creative technology at 37Degrees. "After judging based on case studies before, and making quite a few of them myself, it's so easy to hide something in a case study," he said.

Why it won: Mr. Droga said that what made Cinder worthy of earning the first Grand Prix for innovation was that it was something that "was not only gaining momentum, but has contributed to maybe 20 to 30 entries here at the Festival." The guiding principle for the jury was to find something greater than a campaign idea, that was something that wasn't just "limited to what it is today, but could move other things and competitors forward." 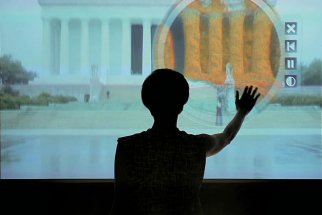 Among software developed with Cinder: a rear-projected interactive screen made of switchable glass, featuring the full history and portfolio of The Mill.

Total number of Lions awarded: There are no Gold, Silver or Bronze Lions in this category. Instead, three other pieces of work won Innovation Lions. They were: "Two Screens Are Better Than One," a new type of phone by YOTA Moscow that was a smartphone on one side, and an e-reader on the other; Thunderclap, by De-De New York, described as a "social media amplifier"; and MasterCard Display Card by the Getin Noble Bank in Warsaw that combines a card with a screen. In all, there were 25 finalists hailing from 15 countries. The U.S. and the U.K. led the pack, each with four shortlisted projects, while Japan and Brazil followed with three each. Poland followed with two shortlisted projects.

What they didn't like: Entries that felt like they could be for any category and ones that weren't fully developed. Mr. Droga said that in the shortlist, there were things the jury loved, but weren't in the right category. Also there were ideas that he said were "simply too premature."

Advice for next year: The format for this award could change in its second year. The jury discussed possibly creating two streams of judging that will lead to perhaps two Grand Prix winners: one for a technology and one for a product. Mr. Droga said that the jury asked whether it was "fair" to judge both together, and whether it was like comparing "apples to oranges." Mr. Tatoueh said that while that was something he thought about as well, "there is something nice about bringing everything to the same level and judging everything on how innovative it is." However, this is only "year one," said Mr. Droga. "We are as much about trying to celebrate this work than to look forward to next year."

Go here to keep up with all the goings-on in Cannes.