What's Next for Cannes in 2015: More Categories -- or Less? | Ad Age
Skip to main content
Sign In Register

Another Cannes, another category. As the sprawling event wrapped up last week, the Cannes Lions International Festival of Creativity was already looking at what's next: possibly adding a data category in 2015.

"We're very seriously considering it," said Cannes Lions CEO Philip Thomas. "We're talking to people about whether they believe there's something in data and analytics and customer insight that's building a bridge to great ideas. The industry is telling us it's an important element," he said. "The question is: Can data drive creativity?"

The industry seems to be clamoring for more categories while complaining that the existing 17 are too many. The festival encourages agencies to enter everything everywhere -- resulting, for example, in McCann Melbourne's "Dumb Ways to Die" winning five Grand Prix last year and Intel/Toshiba scooping up three.

One British ad exec unwittingly illustrated the industry's paradoxical thinking: "They need to drop some categories. But they should add shopper marketing."

"I've been lobbied for shopper marketing and music and b-to-b," Mr. Thomas said. "It's the industry coming to us. And people at the other end of digital say, 'You should make a statement and get rid of Press.'" 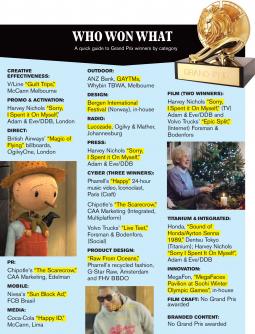 Although a data category may be introduced next year, music and b-to-b, if added, are more likely to be embedded within existing categories, he said.

Unlike last year, the 2014 festival wasn't dominated by a few blockbusters. Outside of U.K. department store Harvey Nichols and Adam & Eve DDB taking four Grand Prix in Promo & Activation, Press, Film and Titanium & Integrated, it was mostly one or two Grand Prix per customer. Chipotle Mexican Grill's "The Scarecrow" film from Edelman and CAA Marketing, for example, won PR and Cyber.

Keeping up with the Kardashians
The biggest global ad event is beginning to look like the film festival. "Her" director Spike Jonze was asked which brand he most admired. Kanye West, he told Ad Age. His brand crush was at the festival -- along with a tranche of celebrities (including Kanye's wife, Kim Kardashian, and mother-in-law, Kris Jenner). Stars who took the stage at the Palais des Festivals or after-parties included Courtney Love, Jared Leto, Rob Lowe, Bono, Shaun White, Robin Thicke, Mariah Carey, Patrick Stewart and Sarah Jessica Parker. And, of course, where there's celebrity, there's Page Six -- the New York Post distributed a special edition that gave the boldface treatment to a few ad execs, including BBDO New York boss John Osborn and Annalect CEO Scott Hagedorn.

But while the stars added style, there was some grumbling among attendees that they contributed little substance.

Not all celebs were there just for the parties. Pharrell Williams was involved with two Grand Prix winners, in Cyber for his 24-hour "Happy" video, and in Product Design for a fashion collection he curated that is made from recycling plastic debris that litters the ocean.

Also in the limelight was John Mescall, the exec creative director of McCann Australia who was the force behind last year's super-viral "Dumb Ways to Die." On Monday, McCann Melbourne won another Grand Prix with "Guilt Trips" for regional transport authority V/Lines in the Creative Effectiveness category.

"By Monday, McCann Melbourne had another Grand Prix to add to the collection, and by Wednesday morning I had a cool new job to look forward to," said Mr. Mescall, who just heard he is moving to New York as McCann's new global exec creative director. "Thank you, fickle ad gods."

Adding more categories with their own quirks could prove tricky given the results at the Cannes Health Lions festival. The new festival had two juries but generated only one Grand Prix, for Dentsu's "Mother Book" in the Health and Wellness category, but the Pharma jury chose not to award the top prize.

That decision sparked debate among senior health-care-industry execs over whether creativity in the pharmaceutical industry should be defined differently from creativity at the main festival, due to discrepancies in regulations across global regions and the sensitive nature of the industry.

There was no consensus. Some said that not winning a Grand Prix is a lesson that pharma players need to be more creative despite regulatory hurdles. Others felt that the Cannes Lions and the way the festival defines creativity are not the right setting to judge pharmaceutical work targeting health-care professionals, as the creativity is often less obvious.

What health-care executives did agree on was summed up neatly by Jeremy Perrott, Pharma jury president and global creative director for McCann Health: "We don't believe we're quite there yet."