Cannes Day Two: Boys Night Out and Eric Schmidt vs. the Terminator

Also: A Disheartening Press Conference
READ THIS NEXT
Salesforce’s Stan Sugarman on driving business values, breaking down silos and hiring for attitude 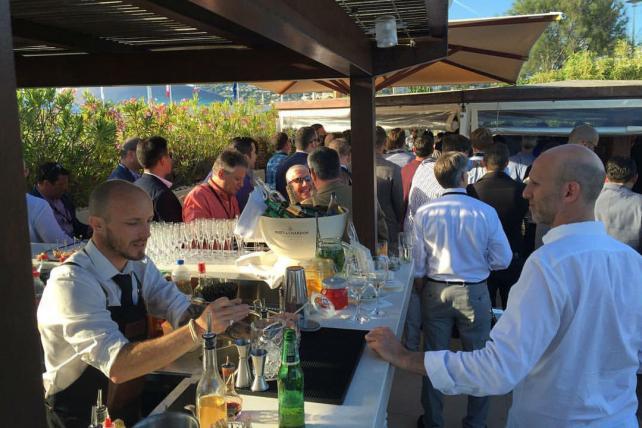 Since it's my first time at Cannes, Monday was a day of firsts, as one would expect. First press conference, first news story written about Cannes, first presentation called one thing, but entirely about something else.

I also squeezed in my first run in France, a three-miler along the waterfront. As sure as I am that you'd be fascinated by my morning musings ("It's not so hot out here. OK, maybe it's hotter than I thought. Damn, I need water."), I'll skip that part. I'll note, though, that I was surprised at the number of go-getters out and about with their Cannes delegate badges on at 8 in the morning. I thought surely everyone would be sleeping it off. Shame on me for assuming no one has self-control.

After a shower and my hazing at a French café -- I made the rookie mistake of asking for a menu and was put in the cone of invisibility -- I headed down to a press conference.

For those not in the know, Cannes holds press conferences early in the day at which the media is told the winners who will be announced at that night's award presentation. In exchange for getting access to the jury presidents and jury and being able to write up stories in the bright, sober light of day (rather than 9:30 at night), we all agree to keep it under embargo until after the show.

My first press conference was a two-fer, where the media were told the winners of the Print & Publishing category and the Radio category.

It was mildly depressing, but interesting because of that.

But unless I was reading the room wrong, there wasn't a great deal of enthusiasm about the situation. During the Q&A period, the reporters in the room basically had to be guilted into asking any questions about radio.

And print? Hoo-boy. As a print veteran, I hate hearing the phrase, "Print is not going to die." First of all, it's not really true. Secondly, there's always a "but" that follows. As there was in this case. According to Print & Publishing Jury President Joji Jacob, group executive creative director of DDB Group Singapore, print isn't going to die, but it's going through an awkward phase, "trying to finds its feet" in an "age of distraction." Further, he said even the best work in the category could have been better with a little more effort. 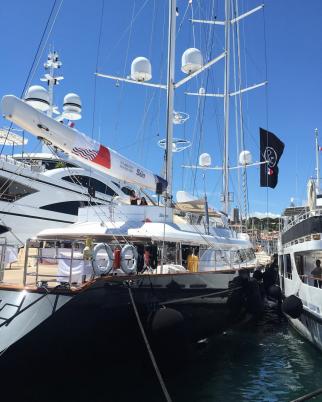 The Sun's yacht at Cannes.

To clear my head, I took a stroll down yacht row. I'd hear a lot of buzz about The Daily Mail yacht, apparently the biggest one taken over by a brand this year. And it is. But I preferred the boat rented by The Sun, docked right next to The Daily Mail giant, because it had sails. (By the way, what does it say about print that these guys are having a boat-off?)

Later in the day, after an unfortunate incident in which I accidentally drank Mojito-flavored 7Up, I lined up to catch an IPG Mediabrands' presentation called "Why Dynamism Is the New Creativity," featuring Wharton professor Dr. Jonah Berger and Alphabet Executive Chairman Eric Schmidt and moderated by New York Times Co. President-CEO Mark Thompson.

Why is dynamism the new creativity? Partly because IPG was publicizing the fact that it tapped Mr. Berger to come up with a new ranking based on dynamism, the D100, and Cannes is a good place to publicize that sort of thing. There are actually other good reasons, having to do with the value of brand change and consumer perception and the like. But the good professor didn't get to spend more than 10 minutes on the index.

It seemed that Mr. Thompson saw a chance to have a one-on-one conversation with the former leader of Google -- which is No. 1 on the D100, for what it's worth -- and ran with it. For the next 45 minutes, it was Google, Google, Google, with talk of video and mobile and millennials and authenticity and innovation. Basically it was Generic 2016 Advertising Talk. I'm pretty sure that Mr. Berger didn't say more than two words the entire time. The one mildly interesting moment was when Mr. Thompson asked Mr. Schmidt, during a tangent about artificial intelligence, if Google worries at all about a Terminator scenario -- you know, the rise of the robots.

"We're not anywhere near that," said Mr. Schmidt, who seemed to consider such movies silly but entertaining diversions rather than prophecies. He seemed particularly peeved that in these movies the humans never notice the computers and robots plotting and scheming over time.

At any rate, if there's one takeaway from Cannes, it's that Google has reassured us that robots will not rise up and enslave us all.

I capped off the evening with something called Boys Night Out, hosted by Michael Kassan and the merry gang from MediaLink, with an assist from Hulu. The mere mention of a Boys Night Out probably has some balling up fists or taking up torches to rampaged against the patriarchy. But if the Girls Lounge can go all week, there's no harm in the guys going out for a few. Besides, Mr. Kassan's Boys Night Out is an outgrowth of his business partner Wenda Harris Millard's Girls Night Out. So everyone just calm down.

The Boys Night Out was not an all-night affair involving many questionable locations, but rather three hours at L'Ecrin Plage under a beautiful full moon. Mr. Kassan and team were there, of course. As were Time Inc. CEO Joe Ripp, Sysomos CMO Mark Young, Clear Channel Outdoor Americas CEO Scott Wells, TrueX Senior VP-Marketing Christian Borges, Sawhorse Media CEO Gregory Galant, a couple of hundred other industry heavy hitters of the male gender and Snapchat star YesJulz, who is, yes, a woman.

YesJulz was on hand to help Muzik hand out the swag bags for the party, which contained a set of Muzik headphones. As a highly principled and ethical journalist, I'm not allowed to take swag bags that have swag one would actually want, just the kind filled with coupons and books no one will ever read. And people really wanted these headphones, which apparently are the first smart, connected headphones. You can not only tweet that you're listening to Milli Vanilli, but also turn your lights on and off. It was a bit odd to see power players clamoring for free swag, but they did seem cool -- and they won't be available nationwide until next month, according to Muzik Founder and CEO Jason Hardi.

Thankfully, there was another brand on hand trying to make a name for itself: Micther's. The spirits company is trying to beef up its export business in Europe, which worked out in my favor. One of the new friends I made at the party, who shall remain nameless, talked the Micther's representative into letting go of a few bottles and a duffel bag for the walk home.

So my second night in Cannes ended not with rosé but with sharing bourbon from the bottle and smoking a cigar (my only real regret of the evening) while walking the croisette.