Nicholas Ross and Nicole Hamilton From U.S. Hispanic Shop Dieste Brought VR to Their Design
READ THIS NEXT
Zoom juries, digital networking, and 'deep dives' into the work: Lions Chair Philip Thomas on what to expect at virtual Cannes

When Ad Age invited young creatives around the world to design the cover of our Cannes Issue with a visual that captures the essence of the creative process today, it was clear from the submissions that some find the creative process agonizing, as with one entry that showed a hand dripping blood.

But Nicholas Ross and Nicole Hamilton's winning design is joyous and engaging. And, for the first time at Ad Age, our cover is way more than a cover. The two digital junior art directors created an immersive virtual reality experience that can be accessed by turning our cover into a viewer and adding your smartphone. The result, "A Window Into the Creative Process—a 360 Experience," invited us into their kaleidoscopic imaginations.

(And if you don't have a copy handy of Ad Age's print issue with the VR viewer, see the video at adage.com/coverexperience) 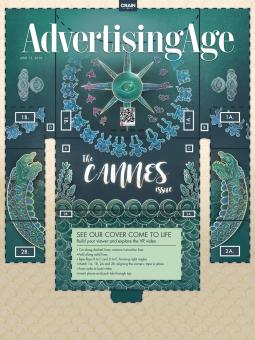 Ms. Hamilton did the animation and illustration, assembling a tool kit of software including Mettle SkyBox Studio and a 360 video metadata tool. "There is a zoetrope thing going on," she said. "There are six cameras. Usually there's one, but the software we have lets you split into six cameras, and stitches it together into one long video. The concept came from the aesthetic that you're in the woods, staring at nature and imagining things, and stuff keeps popping out at you."

Mr. Ross did the concept and design, meticulously piecing together the viewer so that the user's forehead wasn't so close to the phone that it was impossible to watch the video. "I went through 10 different versions of the viewer," he said.

Mr. Ross, 25, and Ms. Hamilton, 26, work at Dieste, Omnicom's U.S. Hispanic shop based in Dallas, doing digital and social media for the agency's AT&T account, among other things. As winners of our seventh annual Young Creatives Cover Competition, their prize is a free trip to the Cannes Lions next week. This is the second time a U.S. team has won the cover contest, and the first time the winner has been from an Omnicom agency.

See a slideshow of our 11 cover contest finalists here.