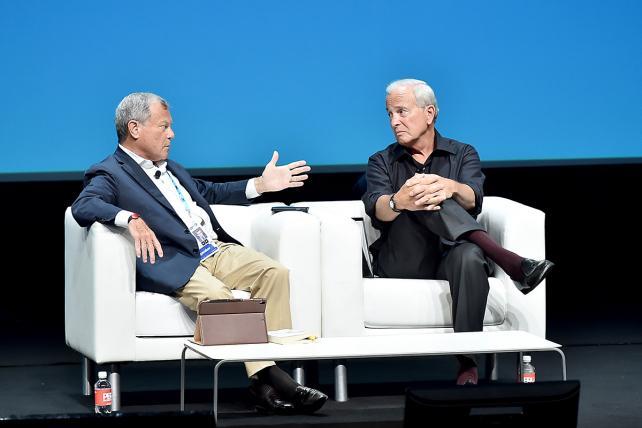 Departed WPP CEO Martin Sorrell wrestled New Yorker writer Ken Auletta for control of an onstage interview Friday at the Cannes Lions International Festival of Creativity, where their wide-ranging touched on the allegations surrounding Sorrell's exit from WPP and the new company he quickly started afterward.

Though Auletta is the journalist, Sorrell spent a large portion of the session posing the questions, interrogating Auletta about his new book, "Frenemies: The Epic Disruption of the Ad Business (and Everything Else)." Auletta eventually managed to ask about The Wall Street Journal's report that WPP investigated whether Sorrell used company money for a prostitute, and a Financial Times article depicting "brutal and inhuman" behavior toward his assistants.

Sorrell said he had "strenuously denied" using WPP funds for a prostitute. "It's not true," he said.

Sorrell also addressed the reports of cruel behavior. "Am I an easy person to deal with? No," he said. "Am I demanding? Yes. I don't think that was fair."

Sorrell also touched on the "leak" to the Journal about WPP's investigation.

"When you have leaks of that nature, of the highest levels of the company, it's a very difficult situation to maintain," Sorrell said. "I think relationships come under a lot of pressure in situations like that."

"To my knowledge, despite asking for an investigation into the leak, nothing has so far happened in relationship to that," Sorrell added, though he said he'd received some indication that WPP was considering investigating that leak.

Sorrell also discussed the 2016 investigation by the Association of National Advertisers and K2 Intelligence that claimed undisclosed rebates and "non-transparent practices" were pervasive in the U.S. media buying ecosystem, to the detriment of marketers.

"The puzzle that I have with all this is we've never seen any specificity at all—it's just been general innuendo," he said. "And I think actually that has been to the detriment to the industry, and it has harmed ... client/agency relationships. But I think unfairly so. There's nothing that has been proven in the U.S."

The end of horizontality

Last week at WPP's annual general meeting, leaders said the company would be retiring the term "horizontality," which it uses to describe collaboration among its agencies. Sorrell said the term had been "obliterated."

"It has been eradicated from history now," Sorrell said. Auletta joked: "You have been."

To audience laughs, Sorrell said, "Well, I have been. And so has horizontality."

Sorrell discussed S4 Capital, the new advertising, marketing services and ad-tech company that he's plotting. CMOs have a mixture of asks for their agencies, Sorrell said.

Asked if that's what Sorrell plans on promising, he said he's not promising anything yet. "But who knows what might happen. I think that is where it's going." He has also said the company will be more focused on digital.

As for his venture competing with his former company, Sorrell repeated his recent remark that S4 is a "peanut" in comparison to WPP. "But I have to admit that some people have peanut allergies," he said.

The future of agency holding companies

Asked about the future of holding companies, Sorrell said they will survive and prosper, but "whether there will be six of them is another question."

He said Havas has an interesting model, working on "advertainment" as part of Vivendi. That "may well become a more and more significant idea. The lines are getting blurred."

He said it's tough to discern differences between individual agencies within holding companies from the outside.