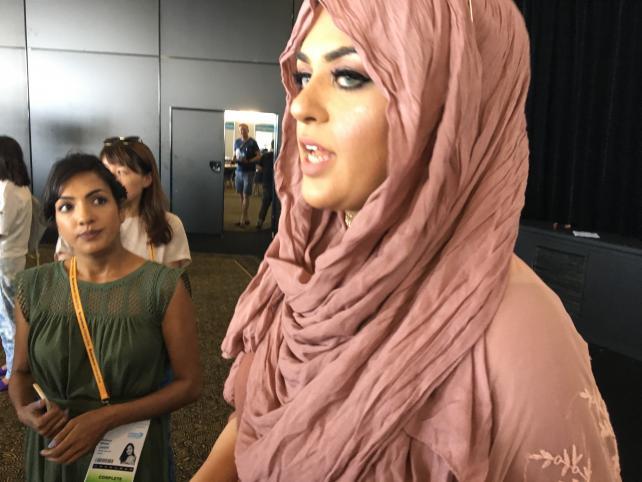 Amani Al-Khatahtbeh came to Cannes from New York to judge female-empowerment advertising as part of the Glass Lion jury. But she said she spent her first hours in Nice being harassed by airport officials who demanded she remove her headscarf upon entry to the country.

Al-Khatahtbeh, who is Muslim, is the editor and founder of a website called muslimgirl.com whose mission is to correct misconceptions surrounding Islam. She said she has hired a French lawyer and plans to file a lawsuit.

"I went to get my passport stamped and they refused to stamp my passport with my headscarf on," said Ms. Al-Khatahtbeh, who arrived on Friday at the Nice airport. "I wear a headscarf on my passport photo so there was no security issue or identification reason," she said, speaking after a press conference in which jury members discussed the Glass Lion award winners.

An official kept saying, "This is France, here you have to show your hair," she added, saying he threatened to send her back to New York. "He kept on saying things that were borderline sexual harassment, like I want to see your hair," she said. Al-Khatahtbeh responded that she would only remove her scarf in front of a female officer. So officials took her to an isolated office, she said. "It was very dehumanizing," she said.

After she removed her headscarf, she got her passport stamped and was allowed to leave. But upon exiting she decided to write down the badge number for the officer, which she said angered the officer.

"He got extremely hostile, extremely aggressive. He said 'You are taking down my identification, I am going to take yours,'" said Al-Khatahtbeh, who says she is a U.S. citizen. The officer, she said, began arranging for her deportation back to the U.S. and called her a troublemaker.

Then she told him she was a journalist and jury member for the Cannes Lions festival. "I have a platform and people here will hear about what you are doing to me right now," she told him. Then officials brought in a female Delta airlines employee to mediate, she said.

"She kept telling me 'Keep your mouth shut, don't say anything, let him say what he wants,'" she said. "Meanwhile, the police officer kept provoking me." He told her she had two choices: to stay quiet or be sent back to New York, she said. She eventually left the airport, but said she plans to press her case in the courts.

A Delta spokeswoman declined comment, referring inquiries to airport and immigration officials. Ad Age sought comment from a Nice airport spokeswoman who referred the request to an airport email address, which did not immediately respond.

"It is necessary to see this through because this is the type of discrimination and extreme hostility that Muslim women in France are entering every single day," Al-Khatahtbeh said.