Across from the Palais at the Cannes Lions International Festival of Creativity this year, an IBM billboard read as follows:

AI was the topic of many presentations, talks and panels at Cannes this year. In the not-too-distant future, many contend, artificial intelligence will be central to creativity and the creation of marketing content.

AI and its subsets of machine learning, deep learning and neural nets, are really just about the recognition of patterns and behaviors. That's the explanation "for dummies," present company included. It's essentially just a program that can perform complex tasks at speed, with the added twist that the more it observes, the better it gets at being accurate. It "learns." And at a pretty rapid pace, this next generation of "programming" is burrowing into our daily lives, from basic autocorrect on our phones to voice or face recognition to self-driving cars. It's pretty rad. And it's going to make a lot of previously impossible things possible.

There, too, will likely be a host of applications for it in advertising. For instance, image searches will be made easier; it will relieve much of the grunt work done in Photoshop; and it will allow for personalization at scale. The go-to example is video content. It can now be personalized, edited automatically and then vomited out in large volumes. Many in the ad-tech community, including the retargeters, optimizers and programmatic buyers, go on to say that AI can also now create. They say AI is the future of creativity.

It's that last bit that the creatively driven among us, while hesitant to sound traditionalist, really want to call bullshit on. Also, for an industry already trying to keep programmatic buying, retargeting, six-second ads, banners and a whole host of other ad "innovations" from making advertising more annoying than it already is, this seems like yet another cross to bear.

The debate about what's good advertising and what's bad advertising is age-old, of course. Right-brained vs. left-brained advertising. Is it art, or is it science? Effectiveness vs. creativeness. Someone remarked onstage at Cannes this year, "It's no wonder people hate advertising. At the most famous show in the world celebrating the best the industry has to offer, I woke up to a big banner that hung across my hotel, blocking views and saying nothing of consequence." AI is just the latest episode in this saga.

Marshall McLuhan said that we shape our tools, and then eventually, they shape us. As AI becomes more powerful and a bigger part of our business, we need to make sure we don't lose sight of what we really do in advertising. To keep our industry alive, thriving and valuable, we, as creators, need to remain distinctly human in our thinking.

AI by definition looks backward for things—it's not creative; it's derivative. The new and different in how something might be done are what drive human creation. Humans might look at the impossible and think it's maybe not so impossible. AI does not compute.

Machine learning is designed to be decidedly unoriginal. It looks at what has been successful and then tries to do that over and over again. It tries to be perfect. Creativity is anything but that. In fact, the number of creative people whom I've heard stumble into a "happy mistake" that transforms something from mediocre to magnificent is many. A great stat surfaced at Cannes that eight of the top-ten-grossing movies last year were sequels—a disturbing trend down a not-so-creative path. In advertising, if left unchecked, AI will only accelerate this lazy drift from originality—mashups, remixes and reruns are going to be more and more in our future.

It's AI's distaste for risk, though, that is probably its most uncreative quality. It doesn't make inspired leaps, and it can't embrace counterintuitive thinking, because it's generally programmed do the opposite. For us agency types, swinging for the fences or trying things that make no (logical) sense at all are the stuff disruption is made of. "Here's to the safe ones" just doesn't have the same ring to it. Weirdly, the tech kids should know this better than anyone else. They literally created the idea of moonshots. To say that AI is the future of creativity is to turn around and quash dreamers everywhere.

Creativity is fueled not by bits and bytes; it's powered by things like storytelling, emotion and humor. It makes people look at things in big, new ways. It doesn't just dust off the small, old things and serve them up more efficiently. AI is a tool, and like all tools, it can be dangerous if not used responsibly. Our industry has its share of bad ads—it's a big reason why Cannes has the draw it does for people. We come to remember the power of great work and to be inspired by the idea that home runs are still possible.

Artificial intelligence is just that: artificial. Perhaps artificial creativity would a better label for it. True creativity is still done by us humans. 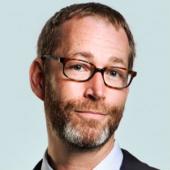