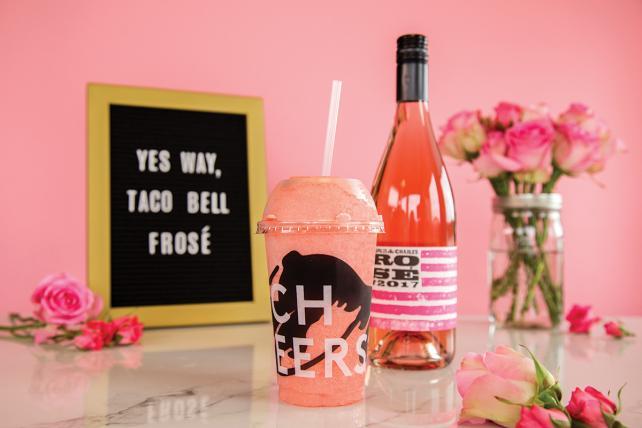 Do you want rosé with that Doritos Locos Taco? That's a real question at a couple of Taco Bell locations this summer, offering more evidence that the pink drink hasn't just entered the mainstream but is getting ready to jump the shark.

But for now, there's no slowing down the demand. U.S. rosé sales jumped 64 percent in the year ending May 19, according to Nielsen. In the ad world, rosé has, of course, long been linked to Cannes, carrying with it a bit of French sophistication. But with rosé flowing so freely in the U.S., it hardly seems like a unique drinking experience anymore (though that won't stop Cannes-goers from downing plenty of it this year).

In the U.S., "the trend caught on starting with French rosé really in the Northeast and now the category is being democratized," says Emily Pennington, managing editor of Wine & Spirits Daily. "Every few years, we have a new gateway wine. It was moscato, then it was prosecco, now it's rosé."

Taco Bell got in the game this year by selling the Berry Frosé Twisted Freeze at two Taco Bell Cantinas, one in Newport Beach, California, and one in Chicago. It's like a rosé Slurpee. The Cantinas sell regular Taco Bell food, but with booze. You'll also find plenty of rosé at discount-minded mass retailers like Target, which in February was the exclusive launch partner for a brand called Yes Way Rosé.

Rosé is so hot that other kinds of alcohol are using it as a flavor. Hard ciders Angry Orchard, Crispin and Strongbow are selling rosé versions, which is boosting total cider sales.

There's even the Rosé Mansion, a two-story, 14-room venue in New York City dedicated to the wine. Attractions include a bar filled with hot-pink sand, a bathtub full of roses and a "blending lab" where drinkers can customize their own rosé. The experience—organized by Morgan First and Tyler Balliet, who specialize in pop-up wine-tasting events—opens July 12 and runs through Oct. 7. Tickets cost $35 to $45, which is a lot cheaper than a trip to Cannes.