The audience at the Lumiere Theater at Cannes today might have expected another presentation of creative in the session "Sex, Lies and Advertising." Instead, they got a moving and brutally personal story of how the campaign's creator lost her children and parents in a fire and how that helped spawn an effort to halt objectification of women in advertising. 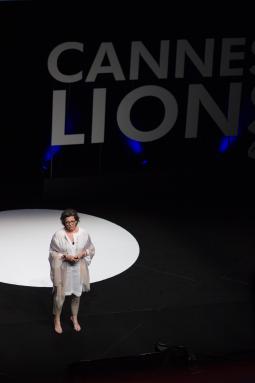 Clad in white and standing alone onstage in a spotlight, the co-founder of Badger & Winters told her story very simply, beginning with her youth in Newfoundland, Canada, and her wish to grow up to be in advertising, just like confident woman in the Charlie perfume campaign of the 1970s.

Ms. Badger talked about her first break at Calvin Klein, where she worked on the Marky Mark and Kate Moss campaigns, before leaving to form her own agency at 30. Her children were born, first Lily and then twins Sarah and Grace. Then the story turned dark.

"After extensive interior renovations, my children and I moved into a beautiful Victorian; there was still scaffolding because it was winter. It was Christmas Eve and I had stayed up late wrapping. The children were asleep on the third floor" and her parents were also in the home and sleeping.

As she continued, you could hear a pin drop in the silent theater.

"There was smoke in my room. I woke up gasping for air and crawled out the window onto the roof of the porch that stretched across the front of my house. I ran to the far end and looked down to the left and I could see sparks where the electric meter was. " She tried to rescue Grace, and was able to open the window but not enter. "I could not get in, the smoke was thick as a grave and flames as hot as flames from hell. My body would not allow me to get in," she said, her voice quivering with emotion.

"My neighbor came over, and I screamed 'Where are they? Where are they?' because I kept thinking that any minute they could come from behind the house and it would all be O.K. It went in really slow motion; in reality it was only minutes but it seemed like an eternity. My three daughters died that night and my parents died and I lived."

She added: "I lost everything, but I did not lose my mind, no matter how many times I wished I had."

"I felt like I was blown to bits. I had been blown to bits. I had nothing and felt like nothing and wanted to be nothing. I begged God to please take me too, but he or she wouldn't. I thought about killing myself many times, but was too afraid that if I got to the other side and there is another place for people who kill themselves, I would not be able to find my little girls."

She said, "I can feel my children. I am still connected; their love keeps me going. This connection is different than the one we had when they were here, but it is just as strong, and some days it seems even stronger, though I know this does not seem possible."

After taking a moment to collect herself, Ms. Badger talked about going back into advertising and becoming business partners with Jim Winters. "He kept the company going so I could have a place to come home to," she said. "I worked. I worked hard. I have always worked hard. It gave me a sense of dignity I could see the part of me I had lost."

Then came the epiphany. "Now I have a reason to be here, I need to make a difference in this world." From there was born the #WomenNotObjects campaign.

"We Googled objectifcation of women and what came up? Advertising. This is when I knew I had the power to make a difference when I found a purpose and the agency's purpose," said Ms. Badger.

She then showed the audience the original #WomenNotObjects film and the follow-up film that carries the hashtag #iStandUp. And when the latter hashtag flashed on the screen, something amazing happened -- the entire audience stood up and applauded. An emotional Ms. Badger, who was speaking on her birthday, said "I have dreamt about this for so long, coming to Cannes and talking with the most powerful people in advertising. For that to happen is the greatest birthday gift I could ever have had."

She then appealed to them to join her effort, after premiering a third film in which children react to objectification of women in advertising. Their responses ranged from "I don't like that, seeing that is disgusting" to "It makes me feel bad for my body," and simply "I don't want to look at this picture anymore."

She ended with asking advertisers and agencies not to use women as props, not to simply use female body parts or show women ridiculously Photoshopped in ads. Ms. Badger also asked them to employ empathy, asking themselves how they would feel if the model were their mother or child.

She then discussed how Badger & Winters has linked with The Girls' Lounge and ABX Advertising Benchmark Index to quantify how objectification of women actually harms business. "It had a negative effect on every KPI across every consumer group. It is disastrous to your brand reputation and extremely damaging to purchase intent," Ms. Badger said. (Afterward at a press conference, Badger & Winters released figures saying that when ads portay women as "whole, human and strong," purchase intent rises 35 points and brand reputation rises 83 points.)

In closing, she said, "It is certainly a miracle that I am here and that we are all here... Real change happens when people come together to take a stand. We have the power to stop objectification of women." She said that if everyone in the audience signed the pledge on the #WomenNotObjects page "it would be a miracle, and I'm a big believer in miracles."