Things Are Looking Up for Female Chief Creative Officers 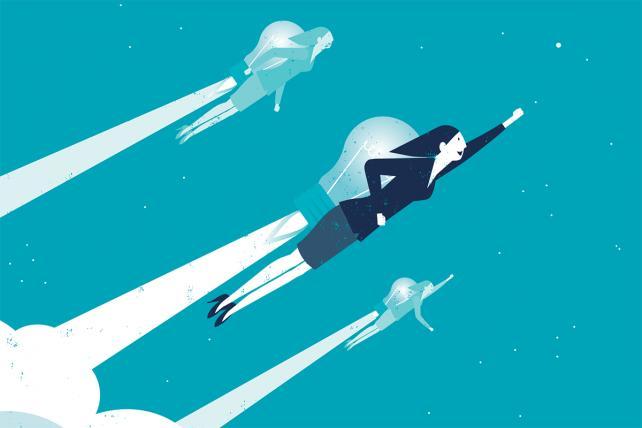 "I never aspired to be in charge of the creative department because of the men that ran them," said Vicki Maguire, who was recently promoted to joint chief creative officer at Grey London alongside Caroline Pay. "I don't get in the way of people's work in progress. I don't give people ideas and tell them to go away and write them. And I would never have a row of five junior creatives waiting in line outside my (nonexistent) office waiting for me to get back from lunch at the Ivy."

And yet, she says, these are all indignities she's endured at the hands of male superiors.

Advertising may still be a boys' club, but creative departments—often seen as the most misogynistic part of the agency—are on the cusp of change after an unprecedented number of women stepped into the role of chief creative officer within the past year. Wieden & Kennedy has just promoted Susan Hoffman to global chief creative officer, joining Colleen DeCourcy, who became the agency's first chief creative officer last October and continues in that role as partner with Hoffman. Other recent chief creative appointments include FCB's Liz Taylor and Margaret Johnson at Goodby, Silverstein & Partners last August; Robin Fitzgerald at BBDO Atlanta in July; BETC London's Rosie Bardales and Grey London's Maguire and Pay in March; and Chloe Gottlieb, who was promoted to R/GA's U.S. co-chief creative officer alongside Taras Wayner just last month.

The new chief creative officers are trying to change old mindsets and behaviors. After Maguire's appointment, she said an "older U.K. adman" approached her at a conference and told her it was a very "brave" move. "He said it could alienate new business prospects," she recalled.

W&K's DeCourcy advocates a hands-on approach, even as a global chief creative officer. "I will go to an office and work on projects with people," she said. "It's not about floating through each office with fanfare."

The work itself also needs to see change, the executives believe. Jaime Robinson, founder and chief creative officer at New York's Joan, says one of her missions is to create work aimed at women that is as creative and funny as work aimed at men. "The best briefs are always for young male products, and both female and male creatives want to work on those," Robinson said. "But we need great work aimed at women too."

Goodby's Johnson points to her focus on "campaigns that do good in the world," such as the agency's recent "Unacceptable Acceptance Letters" campaign about campus sexual assault.

But above all else, female CCOs underline the importance of being a role model and recruiting more women into the creative department, with its reputation for long hours and machismo.

This month at Cannes, Johnson will host a panel titled "Daughters of the Evolution," moderated by director Lauren Greenfield. Daughters of female chief creative officers, including Johnson's own 9-year-old and the daughters of Judy John (Leo Burnett) and Pum Lefebure (Design Army) will speak about their mothers' careers, including the best and worst parts of their jobs. "We hope it will be incredibly inspiring to people who think, 'Gosh, I can't do that job and have kids,' " Johnson said.

W&K's Hoffman said agencies must think about keeping women engaged and happy. "Particularly if they want kids, it's a balancing act," she said. The agency tries to support families with four months of paid leave for new moms and two months for new dads, a food stipend for families with new babies and a work-travel companion program to help mothers keep breastfeeding.

She and DeCourcy also emphasize getting women's work seen and awarded. "We need to get more work into their books that can get them promoted, and not just pro bono projects," she said. Joanna Monteiro, promoted to chief creative officer at FCB Brasil in 2014, says she makes a point of showing women's work around the agency, and making sure their voices get heard.

Some of the chief creatives have observed a similar influx of female leadership on the marketer side. "Many of the CMOs and marketing directors I work with right now are women," BBDO Atlanta's Fitzgerald said. "I walk into our meetings with a high level of respect as I understand how hard they've worked to get where they are. When they see a woman in the C-suite role at their agency, I sense the same recognition."

And there are marketers, like Airbnb's high-profile CMO Jonathan Mildenhall, who have put out the message that they want to speak with female creatives at Cannes.

But some countries and sectors are more progressive than others. In Brazil, where she is still the country's only female chief creative officer, Monteiro has observed that there's been mounting pressure client-side to appoint women into creative leadership roles. Many senior marketers in Brazil are now female, even in traditionally male sectors like beer and cars, yet "we still aren't seeing enough women promoted into top creative roles," she added, pointing out that the economic climate there makes it harder. "The decision makers are still men, and they still see appointing a woman as a risk."