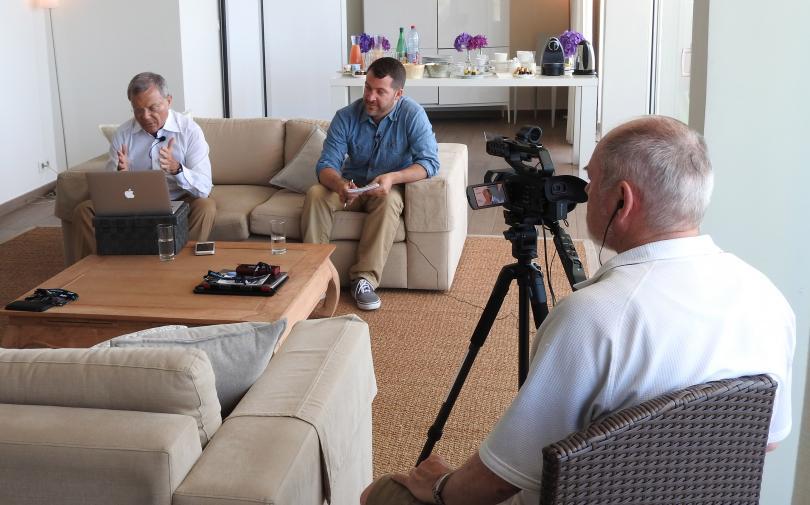 Martin Sorrell and Ken Wheaton during an interview in Cannes on Friday morning.
Credit: Patrick Denton

Martin Sorrell was juggling two video interviews at once Friday morning at the Cannes Lions ad festival when he learned, via a Skype interview with Sky TV, that U.K. Prime Minister David Cameron had announced his resignation in the wake of the country's shocking vote to leave the European Union. "This adds even more to the uncertainty," said the WPP CEO, who said he had "nailed my personal flag to the mast of 'remain.'" 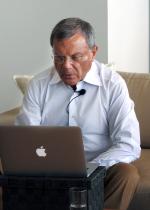 Sorrell gets update on Brexit vote

"In the short term, WPP may actually benefit from market fluctuation," Mr. Sorrell said. And 90% of the agency company's revenue comes from outside the U.K., he noted.

But that uncertainty "is not good for clients," Mr. Sorrell said. And, he added, "In the long term Britain will suffer."

The British ad industry, which was overwhelmingly in favor of staying in Europe, campaigned hard to persuade the country to remain part of the European Union, but on Thursday 52% of voters opted for Britain to go it alone. Mr. Cameron, who campaigned to remain in the EU, shortly afterward said he will step down in October, and the country faces an uncertain time as it negotiates an exit after 43 years.All week at the Cannes Lions International Festival of Creativity, over glasses of wine, Brits who mostly voted absentee before leaving London opined that the vote would be close but ultimately in favor of Europe. Many Cannes attendees, already suffering festival fatigue toward the end of a week crammed full of meetings after too little sleep, were stunned to wake up Friday morning to the news that their country had voted to exit the EU.

"I was really shocked," said one Cannes judge from a London agency that was involved in the campaign. "It's not the outcome we expected. I genuinely don't know what will happen. I'd like to think that the strength of our relationships with key clients means it won't have a big impact. But the uncertainty is possibly the most damaging part."

An American judge from a major network said "I'm glad I'm not our global CFO."

Roberta Medina, a judge in the new Lions Entertainment for Music category and VP of Brazil's international Rock in Rio music festival, said that although England is a strong enough country to withstand fallout from its EU exit, her main worry is that other, more economically-fragile countries will follow the Britain's example and suffer greatly. Her own company, for instance, stopped doing its music festival in Spain because of that country's economic plight.

Fenez Media President Marcel Fenez, who was having a meeting in the lobby of the Majestic Hotel Friday morning, described the outcome as "disastrous" and said "There could be a lot of regret over the decision."

That may already be happening. U.K. TV has interviewed some horrified voters who cast a vote to exit in what they regarded a token protest, assuming that the majority would vote to stay in Europe.

The Cannes festival, based in London, has a foot in both the U.K. and the EU, where the festival in the south of France is held. "Cannes Lions is an international event owned by a business that trades in 150 countries, and we don't anticipate any impact on the business," said Cannes Lions CEO Philip Thomas.

Back in the U.K., Tim Bell, now chairman of Bell Pottinger and the man largely credited with former Prime Minister Margaret Thatcher's three successful election campaigns, led the communications industry's effort to get Britain out of Europe through the group Communicator for Britain. Commenting via email, he said only, "I feel very relieved and very excited."

Moray MacLennan, worldwide chief executive of M&C Saatchi, helped run the "Remain" campaign for the "Britain Stronger in Europe" coalition, led by Mr. Cameron. "It's not what we hoped for as a business and not what most businesses hoped for," Mr. MacLennan said, speaking in Cannes. "But it has happened and it needs calm and rational thinking. [Britain's leaders] need to map out the next two years to cause the least disruption."

"When you get a setback you have to look for the opportunity," he added. "We have to embrace the change and look for good to come out of it. It will be very important to maintain good relations with Europe."

In a formal quote via email, Mr. Sorrell said: "Very disappointed, but the electorate has spoken. The resulting uncertainty, which will be considerable, will obviously slow decision-making and deter activity. This is not good news, to say the least. However, we must deploy that stiff upper lip and make the best of it. Four of WPP's top ten markets are in Western Continental Europe and we must build our presence there even further." 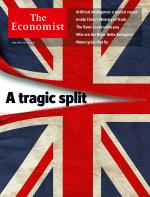 In the U.K., media reaction ranged from The Economist tweeting its latest cover -- a torn British flag and the caption "A tragic split" -- to The Times taking down its paywall until midnight tonight to let everyone immerse themselves in the U.K. paper's coverage. The pro-exit Sun's headline was "See EU Later," while the pro-remain Mirror printed a photograph of a somber child's face painted with the Union Jack and the caption "We're Out."

Initial official reactions were more subdued, and appeared to be crafted at least in part to avoid panic.

ISBA, the U.K. advertisers' association, said in a statement: "First, this is a decisive result reflecting a call for change. Secondly it is not clear what change will look like in the short term or the final new relationship with Brussels … We now start a two-year period whilst we agree with Brussels what our relationship will be. There will be a great deal in terms of advertising and consumer law that came from the EU that will remain in U.K. law. It is business as usual, we are in the EU for at least two years and maybe longer. Rash decisions in business or politics rarely pay off."