Sub-Festival Defines and Refines Categories in 2016

Two Grand Prix were awarded in Music's inaugural year. One went to "Formation," Beyonce's controversial music video that dropped the day before her 2016 Super Bowl performance and pushed the conversation on race relations and perceptions of women with its images of police brutality and female empowerment. It was directed by Melina Matsoukas and produced out of PrettyBird, last year's Creativity Production Company of the Year.

A second went to another controversial work, Jung Von Matt's heart-rending ad for German supermarket Edeka, in which an elderly father finally succeeds in getting all of his family from around the world to come home for Christmas -- by inviting them to his (fake) funeral. It featured an original composition, "Dad," from German singer Neele Ternes.

The top prize in the Entertainment Lions went to the New York Times' VR experience "The Displaced." Produced out of VRSE Works, directed by Imran Ismail and Ben Solomon and creative directed by Chris Milk and Jake Silverstein, the experience immerses viewers into the experiences of refugee children pushed out of their homelands. Part of its promotion was the delivery of more than 1 million NYT-branded Google Cardboard headsets to Times Subscribers. Within three weeks of the New York Times VR app debut, it became the most downloaded app in the publication's history. The prize was The New York Times' second Grand Prix of the festival. Earlier in the week, the VR platform nabbed the top honor in the mobile category. 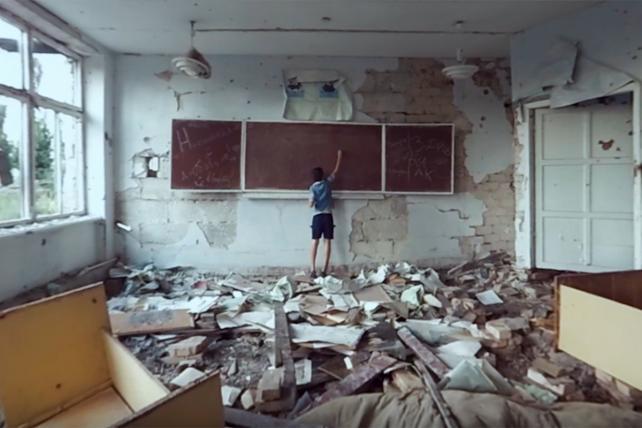 According to Music Lions Juror Marcie Allen, president and founder of Mac Presents in the U.S., both Grand Prix winners were selected for being "conversation starters."

When the Edeka ad was released at Christmastime last year, it rivaled big Christmas players such as John Lewis and inspired passionate audience reactions, ranging from tears to consternation.

In the case of Beyonce's video, "We didn't select Beyonce because she's the biggest star," said Ms. Allen. "We selected [her] because of the conversation. She could have continued to go along and do 'All the Single Ladies' and songs that didn't really move the needle and the conversation with race. And because of everything going on in America right now, the jury felt it was very important that we take a stand to say that even though something is controversial and uncomfortable to discuss, because of its creativity and the conversation, we picked it."

For Lions Entertainment, Jury President Jae Goodman, chief creative officer and co-head at CAA Marketing, noted, "This is a piece of entertainment content that moves the brand and a business forward. You have to experience this to understand why it won. If you haven't, it will be perspective-shifting when you do." He said that the idea was a real business-driver and helped "catapult the Gray Lady 100 years forward."

In the Music Lions' first year, Jury President Josh Rabinowitz, SVP-director of music at Grey Worldwide, said the jury judged such a range of work it was like deciding "between apples and oranges. " With Beyonce, the jury found a standout example in a category that is a little "freer" creatively, not necessarily attached to a branded message, whereas with Edeka, they had a more traditional ad. Ultimately, because of music's growing importance in the brand world, he hoped that the choice of Grand Prix winners would help "accelerate the development of this category."

Mr. Rabinowitz noted that other work that came up in the Grand Prix discussion included Grey New York's NFL's "Super Bowl Babies" ad and Usher's interactive music video "Don't Look Away," from Tidal and created out of AKQA. However, "Edeka was clearly the most powerful" in brand-related work while Beyonce was the clear winner in music videos.

Mr. Goodman said each of the nine Gold winners, all from various parts of the world, "was a contender at some point in the discussion." Amongst those were ADK Taiwan's "House of Little Moments" campaign for Uni Noodles, which consisted of a series of short films set in a fictional noodle shop, which then went on to become a live brand experience -- a real-life noodle house; BBDO New York's GE podcast "The Message"; Nike's "Margot vs. Lily," which Mr. Goodman described as a "near-perfect millennial content series"; Ford's heartbreaking Danish short film "The Family," which throws viewers into the story of a family going through divorce and Norton's original documentary series "Most Dangerous Town on the Internet" from Grey San Francisco and Glade's "Museum of Feelings" out of Ogilvy & Mather Chicago, an installation that allowed visitors to experience emotion through the power of Glade scents.

Mr. Rabinowitz oversaw a nine-person jury of execs and creatives from advertising, marketing and music, from five countries, who evaluated 638 entries. Mr. Goodman presided over 19 jurors from 12 countries or regions. They sorted through 1843 entries, a sizable jump from last year's 1394.