A key to the Chevy Volt's marketing strategy has been targeting early adopters of new technology. 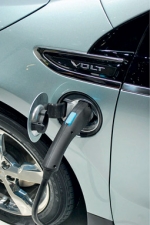 Now, after the Volt's first wave of advertising efforts, including a TV spot during the 2010 World Series and a commercial during the 2011 Super Bowl, the job is to educate the masses.

"Our task now really is education, specifically when it comes to helping people understand the difference between a hybrid and a plug-in electric vehicle," Ms. Landy said.

Added Hunter Hindman, executive creative director at Volt agency Goodby, Silverstein & Partners in San Francisco: "Our strategy has been to inspire people by presenting the Volt as a totally new breed of car for today's pioneers.

"More functionally, we need people to know the Volt overcomes the typical objections and impressions people have with electric cars. ... Hence, our tag line, 'It's more car than electric.'"

In addition to running TV spots, Chevrolet created consumer-targeted videos. The site on which they can be viewed, chevroletvoltage.com, has a chat feature so buyers can share their experiences.

Early Volt buyers received a welcome kit that included a pocket-sized video camera and a note encouraging them to shoot videos of their first experiences with, and impressions of , the Volt and upload them onto the site.

Said Ms. Landy: "We got a very good response from that ."

Kevin Ransom
View all articles by this author