In 1988, Chevy's then-advertising chief Dannielle Hudler -- then Colliver -- was notified that she would fly to a dealer convention on a plane not with her fellow executives but with their wives.

Hudler, 68, then a divorced single mother who rose from a secretary in 1967 at the MacManus, John & Adams ad agency that handled the Cadillac account to Chevrolet's director of car advertising in 1985, thought it was an error. She asked why, only to be told the company had assumed that she would rather travel with women.

She put her foot down: "I'm going with the guys I work with," she insisted, and she was promptly switched to the other plane. "It was daunting being the only woman," Hudler recalls today of those years at Chevy. "There was a lot of chauvinism.

"It was like walking into a men's locker room," Hudler said, noting that she was excluded from business lunches at the men's grill, where women weren't allowed.

Ultimately, she not only gained her male colleagues' respect, she said, but was responsible for Chevrolet's first serious program to advertise to women. Before she arrived, women were "either in the passenger seat or in bikinis across the hood of a Corvette," Hudler said.

She's among several women who helped transform the workplace environment at Chevy during the days when women in executive marketing positions were a minority. Hudler and the others also helped shape Chevrolet's approach to women through advertising and with female-friendly innovations such as purse nets and fold-down trays.

And women represent a key demographic: Women accounted for about 39 percent of all new-vehicle purchases through July of this year, according to R.L. Polk & Co. In the same period in 2001, Polk said, 28 percent of Chevrolets were bought by women; this year, it was 32 percent. "Women are where the growth of the market is coming from, and it's an area that automakers should pay attention to," said Marc Bland, product strategist and multicultural marketing lead at Polk. 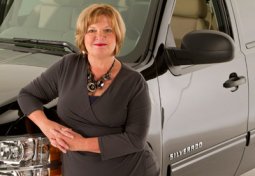 But it wasn't always that way. Candace Haag -- previously Robbins -- faced even tougher barriers as a woman in the male-dominated world of truck marketing when she directed truck advertising at Chevrolet from 1988 to 1990. Haag, 60, recalls being interviewed for the position by Mike Erdman, Chevy's marketing manager at the time, who expressed concern about how she and Hudler would be able to work together. "I said 'Probably as well as two men,' and he laughed and I got the job," Haag said.

She and Hudler quickly made a deal: If they ever disagreed, they would discuss it only behind closed doors. She felt that if others saw them at odds "it would have been seen as a catfight, not a business discussion." As a woman, Haag said, "being average wasn't good enough. You had to be the best."

She recalls securing a coveted spot representing Chevrolet at the annual outing with its partner, Quail Unlimited. She learned to shoot a gun and hunt quail. "I did better than some of the men, who were green with envy," she said.

One of her greatest advertising contributions was a campaign showing a head-to-head pickup comparison with Ford. After the ads were unveiled, dealers gave her a standing ovation. "I knew I had done something that would work in the marketplace," she said. "It was my moment."

Kathy Speck, 57, also faced a male-dominated atmosphere when she joined Campbell-Ewald's creative department in 1985. She recalls waiting in a conference room to present a campaign to Chevy's general manager, when he turned around and said, "Sweetheart, would you grab me a cup of coffee?" He assumed she was a secretary. Before she could respond, a male colleague offered to fetch it. "Ten minutes later I stood up and began my presentation, and his jaw just dropped," she said.

Speck's gender made her an appealing choice to market GM's answer to imports, the Geo subbrand, which was aimed at women. The Geo campaign used the Rodgers and Hammerstein song, "Getting to Know You," playing up the idea of getting to know the new little import line. 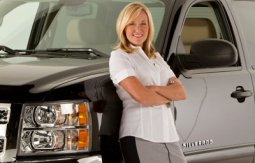 When Kim Brink -- previously Kosak -- became ad manager of Chevrolet trucks in 1994 and Chevy's ad director in 2003, she focused on learning about pursuits important to the mostly male buyers of Chevrolet trucks: fishing, hunting, camping and sports. "These were not my personal interests as a working mother of two," she said.

Brink, 45, leaned on her female ally, Andrea Riley, who directed Chevy advertising for Campbell-Ewald at the time. "We were an amazing team," Brink said, meeting on Sunday nights to prepare for the week ahead. "I think the great work that was coming out of Chevy at the time is testament to our collaboration and chemistry."

Brink said she offered not just a female view but a "good marketing perspective" for the entire target demographic. Her female intuition was critical to the launches of the 2008 Malibu and 2009 Traverse and to her ability to drive key promotional alliances, specifically a five-year partnership with Conde Nast called Fashion Rocks, which included a mall tour. "This effort drove results and helped the Traverse become a category sales leader within its first year of introduction," she said. 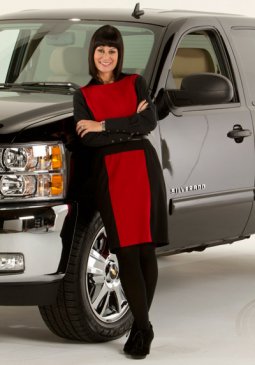 Riley, who ran the Chevrolet account until 2007, said she and Brink were a powerful team, bringing a "different voice to the table." Because they were both full-time working mothers, they found creative ways to get work done, including spending early mornings together at the gym, after their children's bedtimes or on airplanes. Riley, 46, said she was the only woman at Campbell-Ewald to run the account. "Honestly, it was always me and the boys." One of her goals was to demonstrate to the leaders that a woman could handle the pace of the job, which was "blistering" since it was during the "An American Revolution" campaign in which GM released 10 new vehicles over 20 months. She said her male colleagues showed great appreciation for the quality of her work.

Michelle Lange's experience racing cars helped endear her to her male counterparts. As a brand manager for the Lumina and Monte Carlo from 1992 to 1996, she said, "I could talk with engineers and come at it from a technical perspective, which gave me credibility." In her department, there were 16 men, and all the other women were secretaries. Still, she suffered no discrimination and said many of the "walls were broken down" by this time.

It was her idea to send 100 families on vacation for a week with a Lumina and a video camera, asking them to document how the vehicle was working for them. Lange, 47, also takes credit for getting leather, typically perceived as a luxury item, in the family vehicle, since it was easy to wipe clean.

For Karen Francis, 49, the only female Chevy brand manager during her tenure handling the 1998 Chevy Venture minivan, the barrier wasn't gender; it was that she was an outsider with no automotive experience. Though she was single, her female sensibilities allowed her to tap into what moms crave. She was responsible for getting purse nets in the vehicle as well as fold-down trays in the back of seats and built-in videocassette players.

By the time Cheryl Catton, 55, became director of marketing for Chevrolet cars and small utilities in 2006, women had a larger presence and a strong collective voice. Today, GM has several female marketing executives heading cars and trucks. It's now "an easier entree for women," said Heather Stewart, Chevy's national advertising manager since 2006.

Today at Chevrolet's ad agency, Goodby, Silverstein & Partners, Melissa Nelson, 37, a Chevy account director, said there is an even number of male and female marketing executives. "People paved the way to get us to this point. The business world has evolved quite a bit within GM and Chevy." 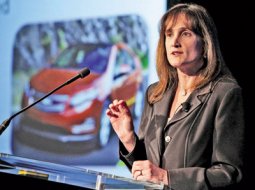 Cristi Landy, as product marketing manager for the Volt plug-in hybrid, heads marketing for a revolutionary product. She began working on the Volt as a concept car team member in the spring of 2006. She said several women have been involved in the Volt in various divisions, including powertrain and plant management. Landy, 44, said her female sensibilities contributed to the convenience features she helped create, including a 7-inch touch screen and an iPhone app that lets drivers check the remaining electric range and see whether the battery needs charging.

"I found the key to being successful is to learn your customer inside and out and what they really want," Landy said. "You need to figure out the target customer and represent them as best as you can."