The return of feel-good, a 'sad' sell, plus a disastrous end for those who deny, deny, deny
READ THIS NEXT
The top 5 creative campaigns you need to know about right now
Credit: Ad Age

This week: A famous prankster pranks again (for a good cause), a show-stopping metaphor and a popular series invades every nook and cranny.

To celebrate the decision to allow vaccinated British visitors into the U.S., British Airways and WPP’s Team Horizon recreated, reshot and recast Charles Clyde Ebbets’ iconic photograph, “Lunch Atop a Skyscraper,” to depict construction workers perched on a girder glancing up at the sky. Photographer Adam Hinton was tapped to match the scene as close to the original as possible. Sometimes, simple works best. 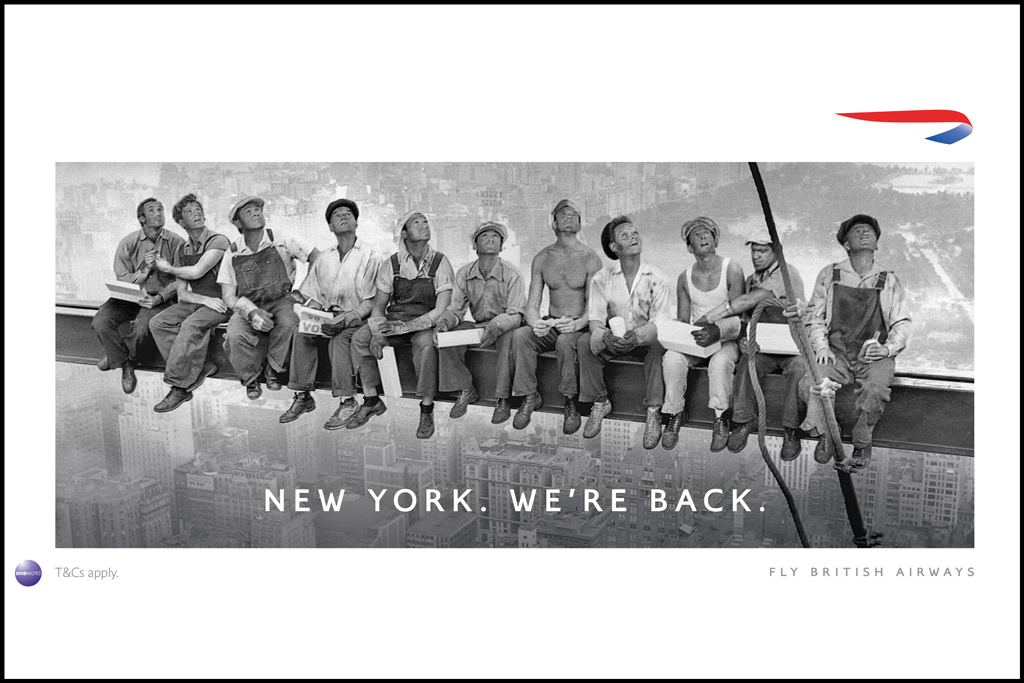 An eye-opening advertisement got a lot of buzz last week. It was a North Carolina truck billboard stating “Don’t Get Vaccinated,” followed by a line directing onlookers to the website of Wilmore Funeral Home. It wasn’t the work of a clever undertaker, however. Rather, it was an idea from Charlotte-based BooneOakley that did just the opposite of what it preached. The link actually led viewers to a site saying “Get vaccinated now” and directing them to StarMed, a local urgent care center that provides the COVID vaccine. The stunt led to a 22% increase in appointments.

A hero busting through a wall is an all-too-familiar conceit in ads and film (see Levi’s seductively stylish ad, the Kool-Aid man and any budding young wizard trying to make the train to Hogwarts on Platform 9¾ ).  That’s what makes the latest film from Greta Thunberg’s Fridays for Future, via Fred & Farid, all the more powerful. It depicts a nattily attired man running on the beach and heading straight toward a massive barrier—but the outcome’s not what you’d expect. The point? That folks can deny climate change all they want, but something huge will stop them in their tracks.

Back in the day, The Truth Initiative made its mark with provocative stunt-themed ads such as a campaign via CPB and Arnold that put body bags at the doorstep of a major tobacco giant. Now, the organization is tackling vaping head-on with a prank-style campaign from Mojo Supermarket. It centers on the VP of marketing at a company trying to get the word out about a fantastic new product—a Depression Stick. He approaches ad agencies, gas stations and even influencers to help him with the push, but naturally, no one wants to help him sell sadness.  It’s actually a ruse, of course, to highlight one a little-known product “benefit” of vaping—that it serves to exacerbate feelings of anxiety and depression.

It feels as if it’s taking a while to come out of the darkness of the pandemic, but one thing helps: cake. To promote its popular series, “Great British Bake-Off,” broadcaster Channel 4 and its in-house creative team at 4Creative created this delightful multipronged campaign that brings sweets and treats to unexpected places. There is a 78-foot building wrapped to look like a giant cake, on-air promos depicting giant treats popping up in everyday places and an AR lens for Snapchat and Instagram letting users turn themselves into talking pastries.

Plus: Will it work?
Instagram: Yours to Make
Agency: Johannes Leonardo

Had it dropped at a different time, the lovely craft on the new brand campaign for Instagram, its first major work from Johannes Leonardo, would have made it a contender for the official list. The anthem film, directed by Rubberband via Smuggler, is a dreamy delight, capturing young individuals in the process of self-discovery, backed by their whimsical dialogue. The push, centered on the idea that its users’ futures and identities are of their making, arrives at a questionable time. It debuted about the week after a Wall Street Journal story uncovered how Facebook’s own research discovered that its photo-sharing platform was toxic to the self-esteem of teens, particularly young girls. The company stood by its findings, acknowledging that there are both plusses and negatives to what it (along with other social media) affords its users. Whether the new campaign’s positive message holds up under the impact of the report, however, remains to be seen.

For more great ideas bookmark our section covering the best in brand creativity every day at Adage.com/Creativity.