Ad Age's Creativity Editor Ann-Christine Diaz and Associate Creativity Editor Alexandra Jardine are joined by Assistant Managing Editor E.J. Schultz in our weekly countdown of the creative highlights of the week, including new takes on Frosty, a 'beautiful, rotten' look back on 2020 and a retro hairstyle revival.

Last month, Apple’s Beats by Dre delivered a powerful, defiant spot that questioned viewers’ love for Black culture. Over in the U.K., it continued its anti-racism message with an outdoor campaign from Uncommon that dropped just as U.K. Premier League soccer reopens to fans in the real world and the U.K. has seen a resurgence of racism tied to the sport. The projections appeared on the buildings of clubs across the country and read, “As we return to the stands, let us promise to leave racism where it belongs. In the past.” 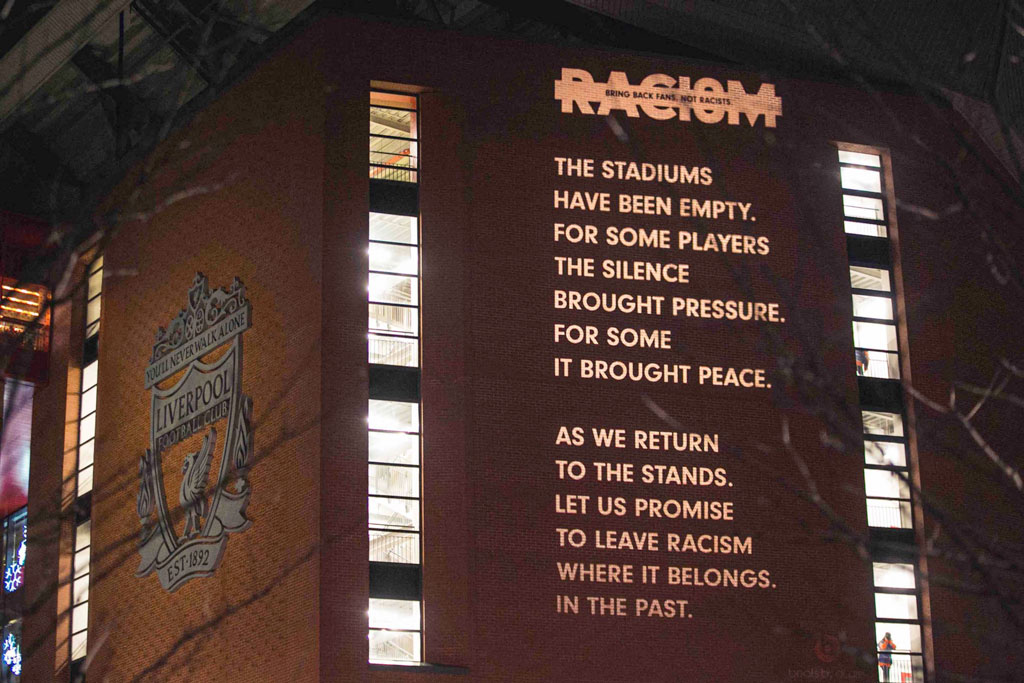 Cartoon Network debuted its own anti-racism message in the form of animated PSAs starring characters The Crystal Gems from “Steven Universe.” This week, the second installment of the campaign, featuring the character Pearl questioning omissions of accomplished Black figures in American history books, went viral, shared by the likes of Kenneth Cole and Barnes & Noble. The PSAs feel like actual content from the show, and while the delivery might seem a bit heavy-handed, they're fitting with the show's characters and do the job in driving home the message to a young audience.

Just about now is when the big tech brands like to look back on the past year through the lens of their own platforms in wrap-up films. Spotify last week debuted its annual “Wrapped” campaign acknowledging the artists and talents who helped us endure, but given the dumpster fire that was 2020, brands like YouTube actually decided to opt out. Reddit, meanwhile took the opportunity to create its first end-of-the-year ad, which manages to convey charmingly both the chaos and the beauty of the past 12 months. There’s COVID, murder hornets, goodbyes to greats like Kobe and RBG, all cleverly tied together with a folksy sing-a-long track that ends with the line, “It’s a beautiful, rotten, never-to-be-forgotten kind of year.”

The holiday season is generally the time we like to indulge in warm and fuzzy fantasies of good cheer, but 2020 killed that for us all. So Coors Light and DDB Chicago decided to embrace the dark times with a new kind of holiday hero, the Beerman. He's like the Bizarro version of Frosty. He’s disheveled, his head isn’t even round, his mouth is in a permanent droop. But appearances are deceptive, and when the Beerman comes to life, he sings a whole new tune. The campaign includes this spot as Beerman ornaments and kits so folks can make a Beerman for their own front yards.

And, at number one, we have a one-two punch from McDonald’s. The fast food brand, which recently was named one of Ad Age’s Marketers of the Year, closes out 2020 on high with a pair of decidedly different, yet delightful, campaigns.

Out of Scandinavia, with the folks over at Nord DDB, McDonald’s is getting super-playful with one of its most famous symbols in a campaign offering to give fans a haircut in the style of its iconic Golden Arches. It’s actually a nostalgia play that harkens back to the floppy ‘dos of the ’90s, which apparently are back in vogue thanks to the likes of celebrities like K-Pop superstars BTS.

Meanwhile, over in the U.S., McDonald’s continues its “Famous Orders” campaign for the holidays. The effort first kicked off before the Super Bowl this year when the brand debuted a spot featuring the trays of celebs like Kim Kardashian West and Magic Johnson, and then continued with pushes like the Travis Scott partnership. Now, the Golden Arches is highlighting the favorite meals of famous Christmas characters like “Die Hard” hero John McClane and Buddy the Elf from “Elf.”

That's it for the Top 5. Make sure to check out more of the best in brand Creativity at Adage.com/Creativity.