Gaga, Oooh La La: Why the Lady Is the Ultimate Social Climber

LOS ANGELES (AdAge.com) -- As far as breakout musicians go, few artists have had quite the zero-awareness-to-ubiquity time-warp of Lady Gaga. And as far as brands go, few marketers of any kind have leveraged social media the way she has to drive sales of their core product -- in her case, albums and digital singles. 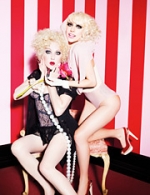 GLAMMING IT UP: Cyndi Lauper (l.) and Lady Gaga's Viva Glam lipsticks have outsold every launch in the line's history.

Lady Gaga, with her army of nearly 2.8 million Twitter followers and more than 5.2 million Facebook fans, can move product. Since fall 2008, her digital-single sales have exceeded 20 million and her album sales hit 8 million, all at a time when no one under the age of 60 buys CDs anymore (see Susan Boyle breaking the record for highest first-week album sales last year). Now, she's being courted by marketers to do the same for their products.

Gaga's rapid ascent to the pop-culture stratosphere is often compared to Madonna's, right down to their shared beginnings in the downtown New York club scene before their big record deals. But what makes Gaga's star status, particularly in the marketing community, so uniquely 2010 is that she has achieved as many milestones (if not more) in 18 months than her idol did in nearly a decade. Madonna's notorious endorsement for Pepsi in 1989 -- cut short after her controversial "Like a Prayer" video aired on MTV -- came seven years after the debut of her first single in 1982. Within a year of her out-of-the-box rise to fame in September 2008, Gaga had already lined up Virgin Mobile as a sponsor of her Monster Ball tour; created her own brand of headphones, Hearbeats by Lady Gaga, with record label Interscope; and landed her own (cherry pink) lipstick as a spokeswoman for Mac Cosmetics' Viva Glam, benefiting Mac's AIDS fund. And by January, she was tapped by Polaroid to become the brand's creative director, hired specifically to create new products and inject life into a brand that hasn't been hip for years -- save for maybe a popular reference in Outkast's "Hey Ya!"

Old school meets new media
How did a 23-year-old singer/songwriter achieve so much in so little time? Two words: social media. Sure, Gaga had a fair share of old-school artist development -- radio play -- to become the first artist to score four consecutive No. 1 singles from a debut album. But she's also put a new-media spin on her distribution strategy. The November premiere of her video for "Bad Romance," for example, debuted on LadyGaga.com before MTV or any other outlet could play it -- resulting in a Universal Music server crash, a Twitter trending topic that lasted all week and a cumulative 110 million (and counting) views on YouTube to date, more than any viral music video of yore (OK Go, anyone?) could ever claim. Vevo, a music video site co-founded by Universal Music Group, also recently reported a whopping 20% of its traffic came from just Lady Gaga videos -- as in 1 in 5 videos streamed on the site was likely to be a song such as "Poker Face," "Just Dance" or "LoveGame."

Gaga has already had a similar halo effect on her Mac Viva Glam lipstick. Less than a week into its launch, the lipsticks created by Gaga and her campaign cohort Cyndi Lauper have outsold any launch in Viva Glam's 16-year history, said Est?e Lauder Group President John Demsey, thanks to a groundswell of social-media impressions. The launch day of her Viva Glam lipstick ad campaign alone generated nearly 20 million unique views in traditional media, including print and web buys and an appearance on "The Today Show," as well as an additional wellspring of social-media hits per Gaga's tweets to her fans.

"Her fan base and our customer base are very similar in that they are drawn to the outrageous and outspoken, so we could not ask for a better partnership," Mr. Demsey said.

Taking credit for Gaga's sudden assault of the zeitgeist is a relatively easy task, as all parties who work with her on her label, management and marketing teams cite Gaga herself as the ultimate brains behind many of her creative and social-media ideas and tactics.

"When you're dealing with someone as good as Gaga, a lot of it is how to stay the fuck out of the way," said Steve Berman, Universal Music's president of sales and marketing. "Gaga has worked tirelessly in keeping up daily if not hourly communication with her fans and growing fanbase through all the technology that exists now."

Gaga in control
Troy Carter, Gaga's manager since 2007, described their dynamic as "95-5." "The only thing I do is manage the vision," he said. "Ninety-five percent of the time I won't comment on creative, and 95% of the time she lets me run the business. The other 5% is where we debate about things like, 'Do you really want to bleed to death on stage at the [MTV] VMAs?' She wins even when we do have those debates 5% of the time."

Dyana Kass, who heads pop-music marketing for Universal, has teamed with marketing firms like Flylife for Gaga's outreach to the gay community and ThinkTank to supplement her online efforts, but otherwise lets Gaga maintain a hands-on relationship with her fans and marketing empire.

"Lady Gaga has truly turned culture on its head and has done so from the ground up on her terms," she said. "You can't buy that kind of authenticity, and as a result the demand for her involvement in projects is staggering."

Mr. Carter, who manages Gaga's marketing partnerships, added that he doesn't want Gaga to ever look like she's endorsing a brand -- hence why she's created products for Universal's Beats By Dre headphones line, Viva Glam and now Polaroid as its new creative director.

"You won't see her face plastered on any packaging or anything. We're comparing it to when Tom Ford went to Gucci or Steve Jobs went into Apple and brought a different thought process and taste level in. We're looking for her to do the same exact thing at Polaroid," he said. "It's not about her putting her name on something -- it's reinvigorating a brand."