The marketers and tech execs who spoke at last week's Ad Age Digital Conference in San Francisco extolled digital not merely as another channel, but as a transformational force that requires brands to rethink their entire marketing strategy.

Here are four lessons from the day.

Authenticity Is Paramount
"The "net generation' doesn't distinguish between entertainment and information; this generation grew up learning the alphabet with song and dance," said David Roman, global CMO of Lenovo. For them, he said, "coolness comes from authenticity" -- down to how the ads are produced. He showed a sky-diving stunt promoting Lenovo's Rapid Boot feature and noted that the behind-the-scenes footage filmed to prove it was real went viral.

Nokia recently got a stark reminder about the importance of authenticity, when news emerged that a video promoting its new Lumia handset camera wasn't actually filmed with the phone, but by a camera crew. It was a mistake, conceded Valerie Buckingham, head of U.S. marketing. But "what's important is what you do next," she said. "We did what a good friend does when they screw up. You say, "Hey this is a mistake, we didn't intend for this to happen and here's what we're going do about it.'"

Sameness Gets Lost in a Digital World
"Beer advertising is very simple: It's a 30-second spot, it has a simple joke, and it runs on a sports channel," said Lesya Lysyj, CMO of Heineken USA, who is trying to bend that paradigm. This year Heineken invested 16% of its total ad budget in digital (likely to rise to 20% next year) and its ads employ longer-form storytelling that 's relatively complicated -- at least for the category. 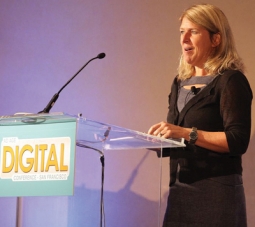 Meanwhile, Heineken's Newcastle brand has adopted an irreverent "no bollocks" mantra, which has proved particularly effective on Facebook, where it now has 400,000 fans.

People and Culture Are As Important as Technology in Data-Driven Marketing
British Airways spent almost a decade corralling passenger data from 200 sources into one database. It built infrastructure to support the number crunching, but perhaps the harder piece, said Simon Talling-Smith, exec VP-Americas, is getting in-flight personnel to use the technology and data to create better consumer experiences. And BA introduced onboard iPads to send in-flight crews passenger-specific information, but Talling-Smith said encouraging staff to use them is still a challenge. "Probably half of the messages don't even get delivered," he said.

New Technology Breeds Imitation, Then Innovation
The first phase of technology generally involves imitating an existing product in digital form. But eventually people find more innovative ways to use the tech. For example, location-based services aren't just for maps, said Drew Breunig, senior director of product at PlaceIQ. A device's location can be used to trigger a content update, such as how Instapaper pushes new content when it recognizes a user is at home. Mr. Breunig suggested publishers could use location to figure out what types of content are most valuable to users at given moments, serving up long-form content to readers at home and shorter posts when users are on the move.