When you're pitching a big brand, a good idea is a requirement. But energy, charisma and a little swag don't hurt. Sam Zises, CEO of the social-planning startup Wendr, proved that this afternoon at the Ad Age Digital Conference when A-B InBev -- maker of more than 200 beers, including Budweiser -- chose his company out of a competitor set of six to team up with the giant on a partnership worth up to $25,000. 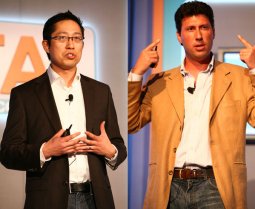 Competing in Ad Age 's second "Brand Hack," Mr. Zises unveiled an idea for a mobile app, "Buds by Budweiser," to help people find friends interested in hanging out that night, find local bars that carry Budweiser beers, and then check in on Foursquare to alert other friends to their whereabouts, which would earn them a free beer or some other type of discount.

While A-B InBev execs said that specific idea may not be executed, they have committed to pursue a brand experiment with Wendr around the idea of planning a night out through social networking.

"We wanted to do it anyway," Winston Wang, global director of strategic innovation-technology at A-B InBev, said of breaking into social planning. Before the pitches, Mr. Wang had told the audience that "night out" was one of the thematic categories that the company wants to see partners help it innovate in.

Mr. Zises, who has worked for Ogilvy and Big Fuel, got the crowd on his side with enthusiasm that the other entrepreneurs didn't match and a wardrobe change in which he switched out his Wendr hat for a "Buds by Budweiser" hat. He also supplied hats for each of the judges.

Rivals included AirTweet, which wanted to help beer drinkers get beverages faster at crowded bars or sporting events by tweeting their order. Consumers would receive a tweet back from a Budweiser Twitter handle when their order was ready for pickup.

Meeps pitched A-B InBev execs on sponsoring discussion categories such as "St. Louis Cardinals" within its category-centric social-networking app that connects people on mobile devices who are interested in similar things in real time. Gravity Jack wanted to bring augmented-reality technology to Budweiser campaigns. Two others, Next Play Sports and Are You Watching This?!, presented ideas dealing with experiences that complement TV viewing of live sports.

A Placecast exec said will be working with Zico starting this summer to push "timely alerts" that may include marketing messages or offers to the mobile phones of people only when they're in a location that indicates an active lifestyle, such as a park or beach. (Consumers opt in for the alerts through Zico's social networks.)