Brands can't buy their way to greatness any more, said Wendy Clark, Coca-Cola's head of integrated marketing and communications, during her keynote remarks on the first day of the Ad Age Digital Conference on Wednesday. 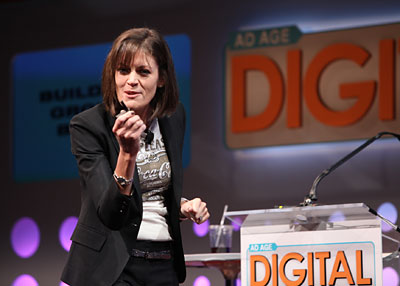 But brands can follow her "liquid and linked" approach to cross-media marketing, she said: "liquid" because the market landscape is constantly changing, and "linked" because no matter which media are used (or how), all brand messages should adhere to the overall strategy.

The road ahead for Ms. Clark, who started at Coca-Cola in 2008 after a stint at AT&T, will increasingly depend on smart strategy across all kinds of platforms. In 2009, the company announced its intent to double its revenue by 2020 -- which equates to serving 3 billion Coca-Cola products a day, up from 1.7 billion today, Ms. Clark said -- a highly ambitious goal for any marketer, even one with the advantage of being one of the the world's biggest and most recognizable brands.

So it's essential for Coca-Cola, and other marketers with big ambitions, to work all types of media -- paid, earned, owned and shared -- for their highest yields. Consumers increasingly control marketing conversations, especially in the digital space, Ms. Clark said. So it's up to marketers to make sure consumers want to talk about them. "You cannot pay your way to greatness for your brands any longer," she said.

Coca-Cola has proven pretty adept at social media: Its fan page is the largest on Facebook, for one thing, with more than 24 million likes. Still, Ms. Clark says marketers have to take things a step further.

Ms. Clark cited last year's FIFA World Cup in South Africa, during which the brand used the global hit song "Wavin' Flag" by Canadian artist K'naan as the lynchpin of its campaign. The song became closely associated with the World Cup and Coca-Cola itself, helping to unify the campaign and peaking at No. 1 or No. 2 on the music charts in more than a dozen countries.

Ms. Clark also stressed the need for creativity in using owned media, citing Coca-Cola's use of increasingly smart vending machines, its fleet of delivery trucks and Coca-Cola cans themselves over the years. "Everything communicates," she said. "And here's a little secret: We're gonna make the cans anyway. Why shouldn't we have them tell the stories of our brands?"