From 'F-commerce' to Community Managers, Digital Change Drives Growing Strategic Questions
READ THIS NEXT
How restaurant chains are duking it out to be the best in their categories

Digital marketing and e-commerce are increasingly blurring the lines between marketing and distribution for Procter & Gamble Co., creating fundamental questions about how the company organizes and compensates its employees, the company's VP of e-commerce, Alex Tosolini, said at the Ad Age Digital Conference in New York today. 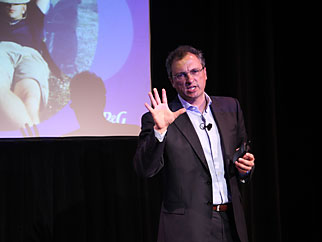 Mr. Tosolini, an Italian national whose career has seen him doing everything from running P&G's business in Poland to its crucial North American laundry business prior to taking his current role last year, didn't share much of the secret sauce about how P&G is addressing that line-blurring. But he gave a glimpse into the degree to which the rapid change is reshaping big traditional marketers like P&G.

P&G "really began penetrating and accelerating digital three years ago," Mr. Tosolini said. And his own duties in e-commerce were created and then joined with digital marketing at the corporate level into a single "e-business" unit only in the past year.

He referred to today's emerging generation as "Generation C," which he described as "always connected, always computerized." The "C" also describes consumers' desire to have "everything happen at the speed of a click."

"For a company like Procter & Gamble," he said, "this is an amazing change in how we go to market." Retailers, consumers and marketers alike can change course "in one click," he said.

"Most people are not as good at dealing with change as they think they are," he said. While he personally has moved about once every three years in his P&G career, he said some employees have essentially been in the same office for 27 years.

"I personally believe one of the skills of the future will be the ability to thrive on the change," he said.

Blurring of the marketing and sales/distribution functions is one of those changes, Mr. Tosolini said, noting that Facebook is both a marketing and a distribution channel as P&G has worked to develop "f-commerce" capabilities on its fan pages, fulfilled by Amazon, which has become a top 10 retail account for Pampers.

"All of a sudden the traditional model of marketing does this, sales does this is blurred," he said. "Think about the implication for big companies on their need to adjust their reward system, their skill development, their training of their people to understand how to cooperate and work in this new environment."

At the same time, he said, the "paths to purchase now are completely unlimited." Pampers, for example, can be purchased in a bricks-and-mortar store, P&G's e-store, Amazon or Facebook.

The changes are leading P&G to add new jobs and titles such as "community managers," "content managers" and "relationship leaders," creating questions about whether to hire them from the outside, "hire them young and train them," contract out the work or create a new internal function.

"These are all strategic questions companies out there are facing," he said, "because there's no doubt that new jobs and new skills are needed to win in this space."

P&G has "pockets of success everywhere," but is still working on "ways to win consistently everywhere," Mr. Tosolini said.

Another challenge, he said, not only for P&G, but for agencies and service providers, is finding a "better balance between creating new stuff and executing with high compliance what we know is working."

Mr. Tosolini said he personally gets pitched on 15 new ideas a week and "my people probably even more." Trying to sort through all that, he said, can detract from executing on things he knows already works.

In an interview afterward, however, Mr. Tosolini said he's generally open to pitches and trying new ideas. "We'll do almost anything once," he said, "then see if it works."