Larry Kramer began his tenure as president and publisher of USA Today last year with a bold redesign of the paper and its website. Now his priority is the editorial itself -- and making it appealing enough to share in an ecosystem where social media increasingly picks the winners and losers. 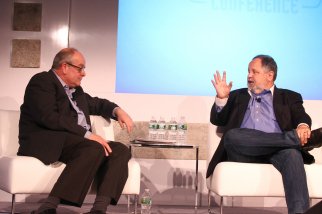 "We went to the staff and said, 'You know, for 30 years you've been told to write the same way,'" Mr. Kramer said at the Ad Age Digital Conference in New York on Wednesday. "'We really want you to have a unique stand on how you write.'"

Now the newspaper is urging reporters to not just write straight news, but to try to offer interesting points of view. And USA Today is planning to add even more personality to the paper in the coming months. (Last fall it hired Michael Wolff, the often-provocative media writer who wrote a column this month calling for NBC Universal CEO Steve Burke to be fired.)

It is also changing the way it approaches breaking news. When Mr. Kramer arrived at USA Today, editors would often cover unexpected news by posting a wire story to its website and assigning its own reporters to work on articles for the print edition. Fearing that the paper was ceding the online battle to others, Mr. Kramer instructed the staff to flip the process around and start with original stories for the web. "Now if you look at our digital offerings they are predominantly staff written," he said.

For Mr. Kramer, that was step one. He is arguing, too, that that the newspaper can no longer function as a single voice. Instead, it has to function more like a choir, he said, a collection of voices, each likely with its own social media presence. News consumers today will not settle for a single conventional story, according to Mr. Kramer. "They're not going to accept sitting in a classroom, being handed a book and being told to read it," he explained.

So USA Today will move further away from that form of journalism. In the coming weeks and months, Mr. Kramer said, readers should expect to see much more personality in the paper. Journalism is now a conversation, he offered, and news consumers do not want to speak with those they view as bland.

The sweet spot USA Today seems to be aiming for -- emphasizing unique thinking and amplifying it with social engagement -- seems a more natural fit for upstarts like BuzzFeed, whose editorial (and advertising) strategy centers explicitly on content that readers might share widely. But Mr. Kramer said the shift is inevitable not just for his organization but for the news industry at large, even comparing it to the arrival of the printing press. "This is a Gutenberg moment," he said.