MasterCard Plunges Into Mobile With Apps and Payments Testing

U.S. Marketing Chief Guerin Says Couponing Will Drive Mobile-Payments Growth
READ THIS NEXT
How restaurant chains are duking it out to be the best in their categories
Cheryl Guerin, SVP-U.S. marketing at MasterCard, speaks at the Ad Age Digital Conference Tuesday morning in New York.
Credit: Patrick Butler

MasterCard is among the marketers making significant outlays in mobile, investing in ads apps and mobile payments, according to Cheryl Guerin, SVP-U.S. marketing. 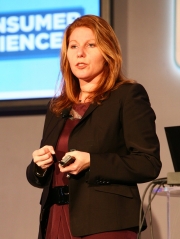 Speaking today at Ad Age 's Digital Conference, Ms. Guerin said that MasterCard was simply following its customers to their new platform of choice, as mobile users look at their phone an average of 40 times a day. Ms. Guerin cited data showing that 11% of online sales and 14.9% of online traffic this past holiday season were conducted via mobile.

"Mobile enables a hyper-local approach," Ms. Guerin said, adding that MasterCard has seized on using mobile to inform targeting based on whether a user is a resident or a tourist.

As part of the strategy, the company MasterCard launched its "Priceless Cities" campaign last year, starting with New York. The underlying idea was to urge cardholders to redeem "experiences," such as special offers, deals and some freebies, through social media. Location-based services accessed through mobile devices were a cornerstone. For instance, a person checking in at the Time Warner Center (a MasterCard partner) could have been alerted to deals in that vicinity through targeted ads. (Ms. Guerin also said that couponing will become a major driver for mobile-payments growth.)

"Priceless New York" also comprised a campaign centered on a citywide search for 20 seats from the old Yankee Stadium. Clues to their location were seeded on social media, and fans were directed to check in on Facebook Places to qualify to win. (Prizes included Yankees tickets, meetings with legendary Yankees and a sleepover at the Bronx Zoo.) That particular effort generated 55 million impressions in four days -- without any paid media, according to MasterCard.

Last, "Priceless New York" sponsored deals on The New Yorker magazine's "Goings On About Town" app, in which writers and artists recommended their favorite places.

The success of the heavily mobile and social program hinged on the local "experiences" MasterCard offered, Ms. Guerin said. "It's not possible unless you're creating local assets, local programs, for cardholders>"

Though MasterCard's efforts in the mobile-payment space are nascent, Ms. Guerin pointed out that MasterCard PayPass has had some high-profile rollouts, including a six-month test with New York's MTA for subway and bus commuters in 2010.

She also discussed the company's role as a partner in the launch of Google Wallet last fall. In one joint online-video ad for Google Wallet and MasterCard PayPass, a couple is ending a first date when the woman asks the man how he feels about having kids; he promptly whips out his Google Wallet app to high-tail it out of the restaurant.

Emerging markets represent a big opportunity for mobile payments, as many consumers in such countries as Brazil and India don't have a bank account or a credit card, Ms. Guerin added. But a growing number have a mobile phone, so a pre-paid mechanism could be developed for those markets.