Tech Giant Has Had Recycling Program Since '80s but Strengthens Its 'Healthy Planet' Vision
Less to it: Sustainability goals and energy efficiency are cornerstones of the 'Motherboard' ad.
Credit:

YORK, Pa. (AdAge.com) -- Before the end of the year, Hewlett-Packard Co. will have recycled more than 1 billion pounds of electronic waste. In 2006 alone, the company recycled enough computer and printer equipment to equal 600 jumbo jets. 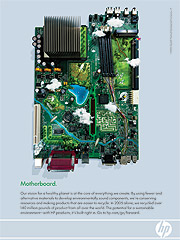 Less to it: Sustainability goals and energy efficiency are cornerstones of the 'Motherboard' ad.
But it's still not enough for the tech giant. The company is on track to reduce its energy consumption 20% by 2010 and increase its renewable-energy purchases this year by more than 350%. It is adding to its line of Energy Star-compliant products (which adhere to standards set by the Environmental Protection Agency and Department of Energy) and improving recycling and education programs.

"Consumers want to buy responsibly. We know they care about social and environmental issues, and it's having a significant impact on brand," Gary Elliott, HP VP-brand marketing, says in an e-mail. "We are well-positioned to respond to the green trend because we've had environmental programs in place for decades."

Three core priorities
And while it may seem like HP's efforts are widespread, the strategy behind them is focused. By analyzing the three main ways the company affects the environment -- through products, operations and supply-chain partners -- HP was able to come up with three focus priorities: energy efficiencies, eco-friendly design, and reuse and recycling. Ads such as "Motherboard" state: "Our vision for a healthy planet is at the core of everything we create."

HP instituted formal recycling programs in 1987. On the corporate side, HP received more than $6 billion in requests for proposals last year that specifically required environmental considerations, and those are just the ones it can track, says Susanne Sonderhoff, HP environment marketing manager-corporate marketing.

Inquiries about the environment from consumers have also jumped, now doubling every quarter, she says.

The most common questions are about recycling, Ms. Sonderhoff says, primarily, "How do I do it?" That's where HP marketing comes in. It has a dedicated website and programs set up to aid customers. For instance, HP will collect electronic waste for free, including non-HP products.

The company includes a postage-paid return envelope inside every print-cartridge box sold to allow customers to send in the old cartridge for recycling. HP also works with retail partners including Best Buy, Office Depot, Wal-Mart and even Starbucks to hold recycling days when people can turn in old IT equipment.

Reuse
HP is also concentrating more efforts on reuse, asking consumers to stop before recycling and ask, "Does this product have any life?" and encouraging participation in its programs for green-friendly leasing, buyback and donations. Engaging print ads that mark HP's recycling and overall green cause use lines such as "We'll take away your PC, printers and guilt" and the more thought-provoking "How far will energy go?"

HP is working to cut energy use internally. A member of the Green Grid consortium seeking to improve data-center energy efficiency, it's developed an automated air-conditioning technology that's designed to conserve energy. It aims to save the company between 20% and 45% in cooling-energy costs. HP also redesigned print-cartridge packaging for North America, a move it says will lower greenhouse gas emissions by an estimated 37 million pounds in 2007.

Another important part of HP's environmental positioning and marketing is education. As Ms. Sonderhoff says, "You can never start learning about the environment too early."

Education
HP partnered with Scholastic to create a teaching program called "Get in the Technology Loop!" to distribute teaching guides to schools for fourth- to sixth-graders. The program includes lessons about saving energy, recycling, reuse and environmental responsibility.

HP has joined with the World Wildlife Fund in an effort that begins with HP's own energy and carbon-dioxide-emission reduction with regular reporting to the WWF and extends to educational efforts, best-practices marketing and project funding.

The first WWF project funded by HP will be a study of the impact of climate change on the wildlife and habitats of North America's Bering Sea.

The global environmental community has also noticed HP's stepped-up efforts. The company has made the prestigious Global 100: Most Sustainable Corporations in the World every year since the list's inception in 2005. It was also named one of 10 global green giants by Fortune.