A School for Cat-Loving Consumers 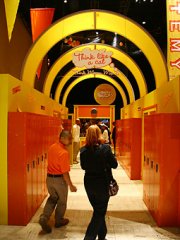 The hallways of The Meow Mix Acatamy.
Rain may have dampened The Meow Mix Acatemy's official first day of school, but new students were eager to learn about how to think more like their feline friends. From Aug. 21 to Aug. 25, cat lovers and pet parents will have the chance to learn about the "true feelings" of their cats with a series of seminars hosted by Del Monte's Meow Mix.

These aren't your average classes. Cat Scratch Fever teaches students to connect with their inner DJ and create mixes while Cat-isthenics, located in the gymnasium, tests cat parents' reflexes as they chase an oversized ball of yarn or scale a giant kitty condo. Students can also relive their preschool days by lounging on a large beanbag and taking a long catnap. The institution of higher kitty learning, naturally, is equipped with a school store that sells all the professors' books and the latest in Meow Mix Acatemy gear.

After class, cats can head for the cafeteria stocked with the latest Meow Mix products while their owners learn about cooking for themselves as well as for their cat from Cat Cora, from "Iron Chef America" and the school's "dean" of students. Other "professors" include Warren Eckstein, host of "The Pet Show with Warren Eckstein" and mentalist The Amazing Kreskin. At the close of their day, students take a survey about the things they learned and graduate with a degree from the Acatemy. 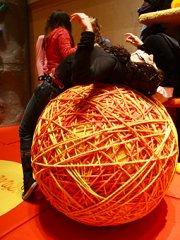 One student stretches like a cat on the giant ball of yarn.

Del Monte, New York-based Grand Central Marketing and Dallas-based Tracey Locke started brainstorming the idea in January 2007. They wanted to bring the brand to life push the idea that Meow Mix knows cats better than any other brand. "It's for cat parents and cat lovers," said Matthew Glass, CEO of Grand Central Marketing. "They're very passionate about the events, and it's a way that goes beyond traditional marketing."

New York is the first leg of this school's 11-city tour, which will also hit Pittsburgh, Tampa, Denver and San Francisco in the next few months.

For many, this out-of-the-litter-box strategy worked. Carol Puttre didn't know about the event beforehand, but discovered it as she walked by. "It's great," said Ms. Puttre, who lives in New York's East Village. "It's adorable. If I wasn't on my lunch break and had my sneakers on, I'd be in that gym." 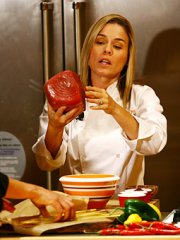 Cat Cora from from 'Iron Chef America' prepares some tuna.
Her daughter, Anastasia, 19, thought the concept was genius, especially the class taught by Cat Cora. "I love the Food Network," she said. "That was a very good draw."

Joe Tuza, VP-pet products for Del Monte, said that the event's response has been more than he expected. "We're all very excited," Mr. Tuza said. "Meow Mix has been known for doing events like these, and now consumers expect that from us."

Indeed, Meow Mix has used regularly used event marketing in the past few years. In 2005, the brand opened its first-ever Meow Mix Caf?. Located on 42nd Street and 5th Avenue, the caf? was a way for cats and their owners to do lunch. Then the brand hopped on the reality-show bandwagon and created "The Meow Mix House," a show that brought 10 cats together from all over the U.S. to live together and have their lives taped. The show, which aired on Animal Planet as well as a 24-hour webcast, took place in a "house" inside a storefront on Madison Ave. Viewers were able to vote for their favorites, and the "losers" would be sent out of the, er cathouse, and adopted. After 10 weeks, Elis, a cat from San Francisco won a position as a VP at Meow Mix. The show was popular: 2.5 million people voted for their favorites.