Dr Pepper Puts a Band in a Bubble

Cartel Records Album on Pier 54, Plays Free Concert to Promote Soft Drink
READ THIS NEXT
How restaurant chains are duking it out to be the best in their categories 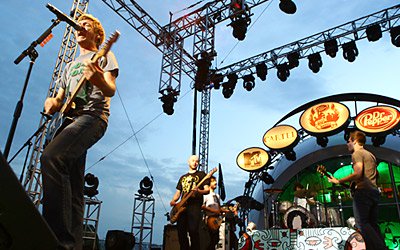 Pouring rain in New York didn't stop Dr Pepper, pop/punk band Cartel or fans from making it out to Pier 54. Who could say no to a free concert and enough free soda to send you into overdrive?

It all started last year when Mediaedge:cia and True Entertainment approached Dr Pepper with the idea of sticking a popular band in a bubble to record an album. The brand enlisted Cartel to be filmed 24 hours a day from May 24 to June 12, with the live stream accessible only via codes under the soft drink's bottle caps. After 20 days inside a large glass bubble in the middle of New York's Pier 54, the band was about to bust out.

Arriving an hour before the event was supposed to start, herds of anxious fans lined up on either side of the entrance. Some were singing their favorite Cartel tracks, and others were shielding themselves from the large droplets that were starting to fall. The pier held a large screen showing the band's latest videos and concert footage; two concessions stand filled with Cartel memorabilia; and, at the far end, the bubble. 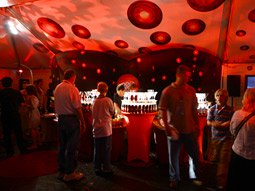 VIPs and Cartel fanatics
A long strip of white tents in the center marked the VIP area, which was lined with velvet ropes. Corporate heads and music-industry bigwigs enjoyed a selection of finger foods, cocktails and, naturally, Dr Pepper. Meanwhile, concert fans were led in groups of 30 to the concert pit in front of the stage. Cartel fanatics received bracelets in pink or green, while Dr Pepper contest winners wore passes around their necks. Everyone got bottles of regular and Diet Dr Pepper as they walked to the fenced area.

Since the concert was supposed to air live on MTV, a network rep came onstage to rehearse the crowd, but they needed no practice. When host and "Road Rules" veteran Blair Herter hit the stage, the cheering became a continuous stream of noise.

The band wasn't slated to go on until 8:20 p.m., so brand reps tossed Dr Pepper shirts and caps into the crowd. At exactly 8:25, everyone counted down, and Cartel burst out of the bubble. The screaming got even louder as the band members took their places onstage. "It feels so good to not be in that thing anymore," said Cartel frontman Will Pugh as the band started playing its new single, "Lose It." The crowd sang loudly and danced wildly during the 45-minute set -- with bottles of Dr Pepper in hand, of course. The album comes out on July 24. 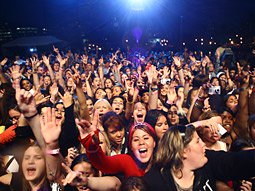 'Three key objectives'
Andrew Springate, Dr Pepper's VP-marketing, said he was pleased overall. "We had three key objectives that we accomplished," he said. "We had very strong sales throughout the month. We really wanted to engage our audience. It helped our equity and our affinity scores."

Doug McVehil, VP-digital media marketing and promotion for Epic Records, also called the event a great success. "We absolutely benefited from Dr Pepper's commitment to market our band alongside their soda, and look forward to extending their partnership with the band beyond this one promotion."

Although there was a continuous run of the Dr Pepper Band in a Bubble TV spot, as well as constant plugging of the Band in a Bubble website, fans said it didn't really persuade them to buy the soft drink. "I only drank this because it's free," said Christine Demao of Long Island, N.Y. "Maybe I'll buy it once in a while."

Dani McNamara, 19, thought Dr Pepper may have benefited more if it had used a more popular musical act. "Put Britney Spears and get her to rock out, then it would sell more," the Long Island resident said.